CEPA protests in and outside Hampshire Dining Commons Wednesday 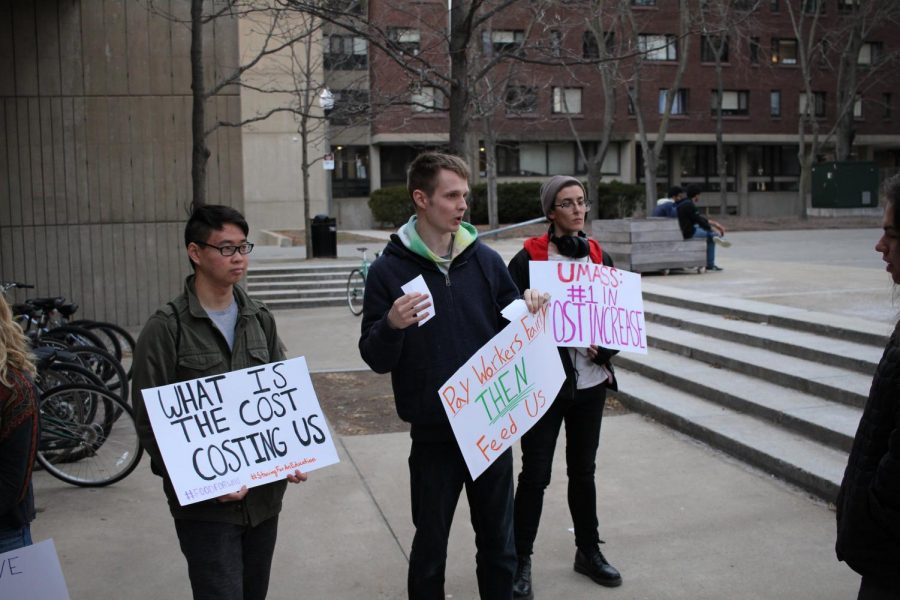 Students from the Center for Education Policy and Advocacy protested for roughly half an hour during the “Best Campus Food Celebration,” demonstrating in and outside Hampshire Dining Commons on Wednesday evening.

James Cordero, the external communication coordinator of CEPA, said Ken Toong, executive director of Auxiliary Enterprises at the University of Massachusetts, met with student leaders on campus last week to discuss an increase to meal plan prices in order to cover health care costs for temporary workers in the dining halls. Cordero said that Toong communicated that the proposal was going to happen; however, according to the University, the proposal does not exist.

“Temp workers in the dining halls recently advocated to have health care, and they absolutely deserve health care, but I don’t think that this is a good way of going about doing that, because right now, UMass dining is pitting students against the health care of workers,” Cordero said.

When asked which student leaders were involved in this discussion with Toong, Cordero declined to comment.

Daniel Fitzgibbons, associate director of news and media relations for the University, said he had talked with Toong earlier on Wednesday, and UMass Dining had not proposed a fee increase. They are in the process of reviewing their budget for the upcoming year, which is an annual process.

“There has been no proposal from dining that has been sent to the administration,” Fitzgibbons said.

Fitzgibbons said if the plan was proposed, it would have to go through various people, including Chancellor Kumble Subbaswamy and the Board of Trustees.

Cordero said CEPA was protesting at this time because they did not approve of the idea and wanted to inform students of the possible meal plan increase, especially after the University allowed tuition to increase an additional three to four percent for the 2017-2018 school year.

“We feel it is our responsibility as students to keep other students informed. We believe students should have a voice in this position, and students can’t have a voice if they don’t know this is an issue,” Cordero said.

According to the UMass Dining site, “Auxiliary Enterprises provides the core service that support the academic and extracurricular goals of the university.” They are also contracted to run Hotel UMass, UMass Conference Services, Licensing, UMass Catering, the University Club & Restaurant and the University Bookstore.

John Page, a political science and operation and information management double major who is a student manager for Hampshire Dining Commons, explained how he understands the concerns of students, but that this issue should be solved through conversation.

“I agree with what they’re fighting for. But I also fully believe that the employees are treated well and that they should get the benefits that they deserve, and I think that students shouldn’t have to pay just to get good quality. Quality and affordability aren’t mutually exclusive,” Page said. “That doesn’t mean it’s easy, but yelling about it won’t solve the problem. We have to sit down and ask the tough questions, evaluate things.”

The “Best Campus Food Celebration” event at Hampshire Dining Commons was held by the Princeton Review and allowed chefs from Cornell University, James Madison University, Rice University, St. Olaf College and Virginia Tech to create dishes and compete against the University of Massachusetts.