C.J. Anderson leaves Mullins Center with a win and an ovation 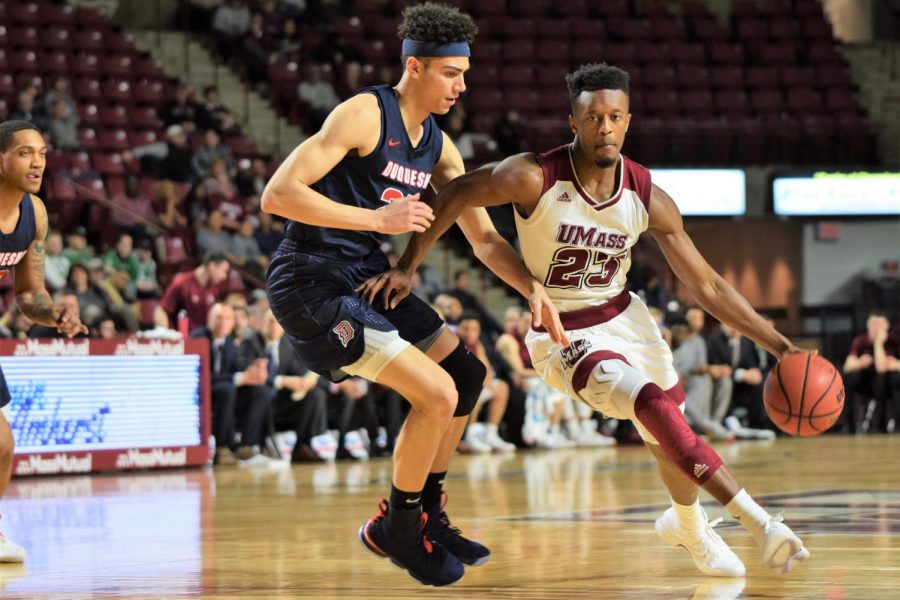 For C.J. Anderson, the Massachusetts men’s basketball team’s 85-75 win over Duquesne Saturday night was more like the end of a chapter than a permanent ending.

Prior to the game, the senior was honored for his commitment to the program over the last four years, and in the final seconds of the game he walked off the court as the Mullins Center crowd giving him a standing ovation.

Anderson’s college career isn’t quite over yet, as the Minutemen (12-19, 5-13 Atlantic 10) will play La Salle next Wednesday in the first round of the A-10 Tournament. But Anderson has made his last jumper at the Bill.

“It was great. The atmosphere, I loved it, the fans loved it. It was crazy man, I’m blessed to have been here for four years,” Anderson said.

Anderson finished the game with 12 points, bringing his career total to 612. That number could increase depending on how many points he scores in conference tournament. He matched his point total with 12 assists, tying a career-high.

The Minutemen finished with a season-high 24 assists, with four players scoring more than 15 points.

The win combined with it being senior night for Anderson made for a jubilant UMass bench.

“We’re just a funny team,” Anderson said. “They were joking with me telling me it’s time to cry now and I’m like, nope. I can’t do that, I don’t like to cry in front of everybody. I’ll do that when I get to the house.”

Some of that humor must rub off from Anderson himself, who his teammates describe as the comedian of the team. Malik Hines and Rayshawn Miller tried to claim the role as comedian for next season, but Anderson quickly shot that down.

Having played in 124 total games in his career, Anderson did his best to take in this one a little more.

“There were definitely moments in the game where I was just trying to soak it all in,” Anderson said. “It was my last game in the Mullins Center, so every once in a while I looked up into the crowd to see what was going on.”

With a crowd of only 2,953 on Saturday, Anderson has played in front of larger audiences, but there was no lack of applause when he walked off the Mullins Center court for the final time.

As Anderson walked off the court with 25 seconds remaining, he hugged UMass coach Matt McCall.

“Listen, I think C.J. has been playing his best ball over the last two weeks,” McCall said. “I wasn’t here the last three years, but I would say he’s probably playing the best ball of his career. That’s a tribute to him, C.J. is one of the hardest workers I’ve been around. He’s always in the gym, he’s always trying to get better and you can see that, even over the summer. I’ll never forget, I was the only one here over July Fourth weekend and so was he and he was in there working.