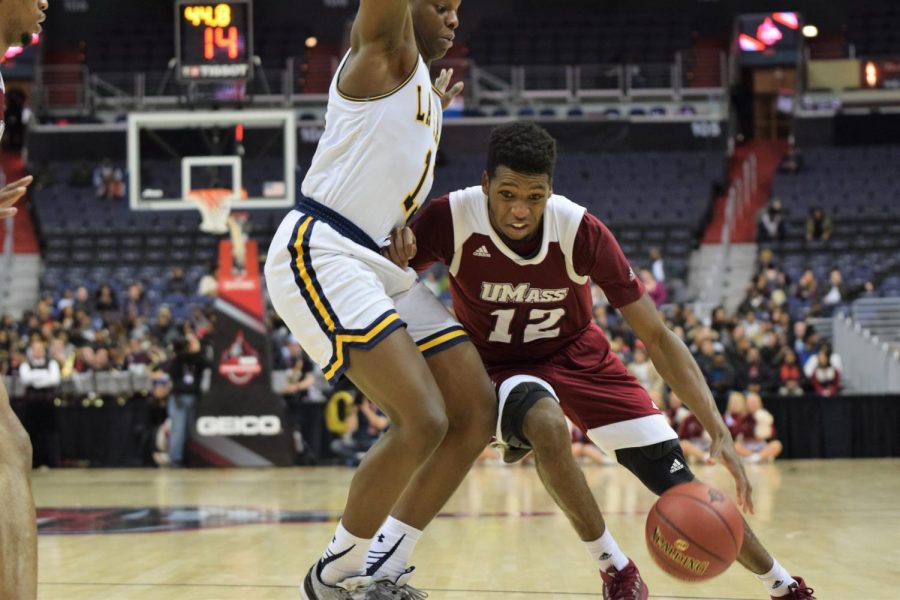 WASHINGTON D.C.—Carl Pierre has had to grow up fast as a freshman with the Massachusetts men’s basketball team.

On Wednesday, he played 35 minutes on the biggest stage of his young career in the opening round of the Atlantic 10 Tournament.

His bread and butter has undoubtedly been his 3-point shot; Pierre made 88-of-187 3-pointers this season, good for a .471 3-point shooting percentage.

But that wasn’t what made Pierre valuable vs. La Salle. In his 35 minutes, Pierre landed only one 3-pointer, the rest all came from mid-range or in the paint. 11 points is far from a game-high for the freshman but his play was much more effective than that suggests.

Pierre’s aggressiveness down low arguably paid off the most when he blocked 6-foot-10, center Tony Washington with 11:26 left in the game and the Explorers up 45-44.

Having recorded only seven blocks all season, Pierre stuffing Washington—who finished with 20 points and 12 rebounds—sparked life into a UMass team struggling to keep its head above water.

“We preach just having the next man up, everyone’s got to be ready,” Pierre said. “Before every game we tell every person to be ready and I think today was a game where that really was emphasized.”

The block led to a stretch of scoring that featured Pierre missing a 3-pointer, grabbing his own rebound and hitting the mid-range jumper. C.J. Anderson then made a layup and a 3-pointer shortly after to give the Minutemen a 52-45 lead with 9:33 left.

Foul trouble caused Luwane Pipkins to play only 26 minutes and record only 15 points. This opened the door for players like Pierre and Anderson to facilitate scoring in more ways than one.

“We ran a little action there and we put Carl in a pick-and-roll with the ball in his hands,” UMass coach Matt McCall said, “and he made a great play, got right to the elbow for a pull-up jumper late in the game.”

McCall has praised Pierre’s ability to embrace big moments and not crack under pressure. Becoming more aggressive is something that the freshman has improved on throughout the season and is trait that Pipkins believes could make him a force.

“Carl is Carl, we just try to stay on him,” Pipkins said. “He’s young right now so we just tell him to keep shoving the ball, keep doing what he’s doing, keep being aggressive. Once he’s aggressive I think he is a really hard player to stop.”

Having been a late addition to the roster last spring, Pierre is embracing his opportunity to play college basketball in March.

“I’ve been very excited to play in the postseason,” Pierre said. “It’s been a really fun experience, high-level basketball. This is definitely what I signed up for and I’m really excited to play as much as I have been, and I’ve just been trying to get out there and play with an edge, every play, every possession.”