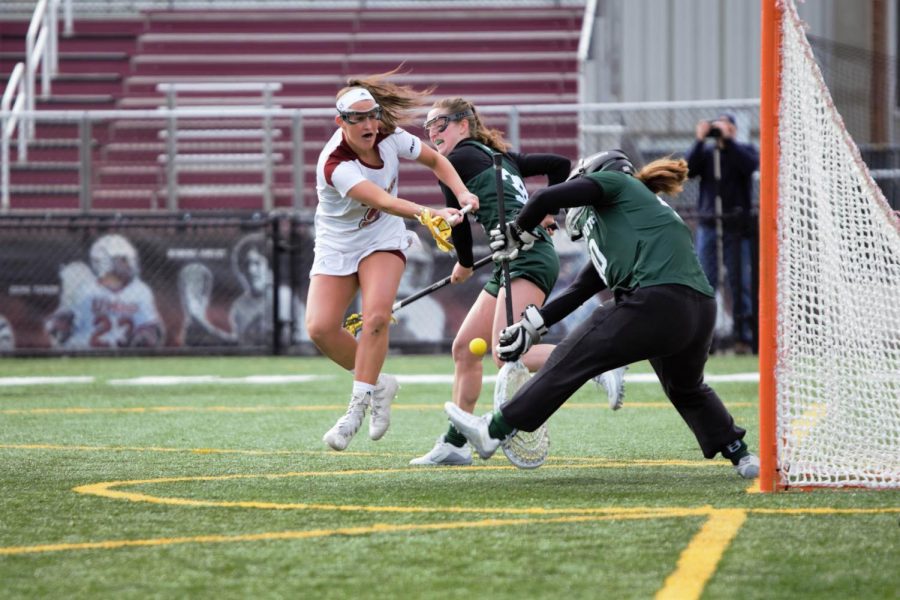 After losing its first two games on the road, the Massachusetts women’s lacrosse team knotted up its away record to an even 2-2 after Saturday’s 12-11 win over Connecticut.

Off the stick of Holly Turner, UMass (3-2) collected the game-winning goal with seven seconds remaining in regulation to seal the win. Turner is tied for most points on the team with 17, shared with teammate Hannah Burnett.

“(Turner)’s someone that thrives in those moments—she’s always very poised and composed,” said head coach Angela McMahon. “She’s definitely someone you want with the ball in their stick. She did a great job, especially when she received the pass in that transition [on the game-winning play].”

Known for being cool, calm and collected, Turner produced the deciding goal by staying patient as the last few seconds on the clock quickly ticked away.

“You know, a lot of players might have just shot right away,” said McMahon. “It could’ve been a[n easy] goalie save, but she took her time on it, and really faked the goalie out.”

Not willing to let her defense fall out of the spotlight, McMahon emphasized that without some key defensive turnovers, the offense wouldn’t have been able to do what it did.

“You’ve got to also credit the defense for making a ton of stops and creating a turnover for us to transition with the game on the line,” said McMahon. “With only 15 seconds left, they really stepped up in, giving us the opportunity to have the ball.”

Making arguably the biggest play of the game, senior Kasey Keane created a turnover, taking advantage of a late-game mistake made by UConn’s Grace Nolan.

“Over the past two games, (Keane) has stepped up huge for us on defense,” McMahon said. “[She’s] just playing so aggressive, so fast and just generating a lot of offensive opportunities. With her aggressive, defensive play, she’s doing a great job of being a catalyst and spark for us.”

Not willing to let the contest slip away, the Minutewomen proved they could get right back into the swing of things with a quick three-goal run to start the second half. Hannah Burnett, Kaitlyn Cerasi and Holly Turner made up the scoring committee that sparked UMass’ high-energy second half.

When speaking on the key to offensive success, McMahon often stresses aggressive possessions mixed with a limited number of turnovers. She is a firm believer of the somewhat obvious, yet logical theory that you cannot score without long possessions of the ball.

After trading leads back and forth, Saturday’s tilt saw the score tied up six times.

“It’s not always that easy to do, but fortunately we didn’t let them get too much of a lead—we were able to close the gap,” said McMahon. “We just have to learn from this and really focus in on starting our next game stronger.”

UMass will travel to Albright College in Reading, Pennsylvania on March 11 to face Ohio State.

Ryan Beaton can be reached at [email protected], and followed on Twitter @ry_beaton.