Johnston: Despite early exit in A-10 tournament, UMass men’s basketball has reasons for optimism moving forward 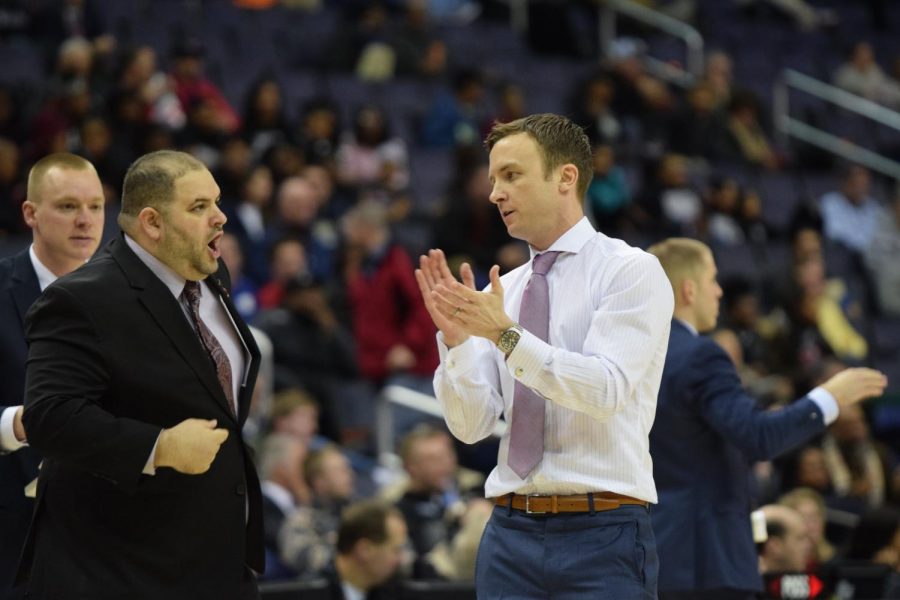 WASHINGTON, D.C.—It felt like the Massachusetts men’s basketball team could be the Cinderella story of the Atlantic 10 tournament.

After defeating La Salle in the opening round, the Minutemen were taking on a George Mason team they had taken to overtime twice this season. UMass opened the game scorching hot, building an early double-digit lead, but the fire would burn out in the end as sophomore Luwane Pipkins had a chance to get a three off at the buzzer that had a chance to send the game to overtime, but was called for a push-off before the ball could leave his hands.

The thought of what could have happened had Pipkins been able to throw up a buzzer-beater is a perfect allegory for a Minutemen season that was filled with what-if’s. What if Jaylen Brantley had been healthy enough to play? What if Rashaan Holloway wasn’t suspended? What if Chris Baldwin didn’t get hurt?

Those questions will never be answered, but UMass did answer one thing this year—no matter what adversity was thrown their way, the Minutemen would fight through it and compete to the best of their ability. Despite playing with less than eight scholarship players all year, the Minutemen were able to build a culture of competing and never giving up in UMass coach Matt McCall’s first year at the helm.

“The first piece to winning in March is caring,” McCall said. “Our guys in that locker room, they care. They’re hurting that this chapter has come to an end but the encouraging piece as a coach is that you can see care.”

Despite winning only 13 games and finishing with the second worst record in the conference, the Minutemen have every reason to be optimistic going into next year. UMass welcomes in four transfers that McCall landed a year ago who were forced to sit out this season. The Minutemen also have two recruits inbound, guard Tre Wood and forward Samba Diallo, who will bring much needed depth to the team.

Most importantly, Pipkins will be returning to UMass next season. The sophomore was named Co-Most Improved Player in the A-10 this year, as well as being named to the All-Conference Second Team, after bringing his scoring average up nearly 11 points to finish second in the conference in scoring. Pipkins has shown he can carry a team to victory, scoring a program-record 44 points in a game against La Salle earlier in the year, and should be a contender for A-10 Player of the Year next season.

Freshman Carl Pierre, who had 17 points against the Patriots, was one of the biggest bright spots for UMass this season. Pierre finished the season averaging just over 12 points per game, and he shot 44.3 percent from three and will be a key player for the Minutemen for the next three years.

The biggest difference in the loss to George Mason was on the offensive glass, as UMass surrendered 20 offensive rebounds which translated to 26 second chance points. If Holloway and Baldwin return next year, along with freshman Khalea Turner-Morris taking another step forward, teams won’t be able to dominate the Minutemen on the boards like George Mason did.

The only player leaving UMass next year is senior C.J. Anderson. Anderson’s play down the stretch of the season was some of his strongest in his four years with the program, and his leadership helped shape the culture that McCall is attempting to build.

When the A-10 tournament rolls around next year, the Minutemen won’t have another opportunity for a Cinderella run. Not because they aren’t capable, but because nobody will be sleeping on them or counting them out.