Keeping a cool, calm and collected poise is key for the Minutewomen 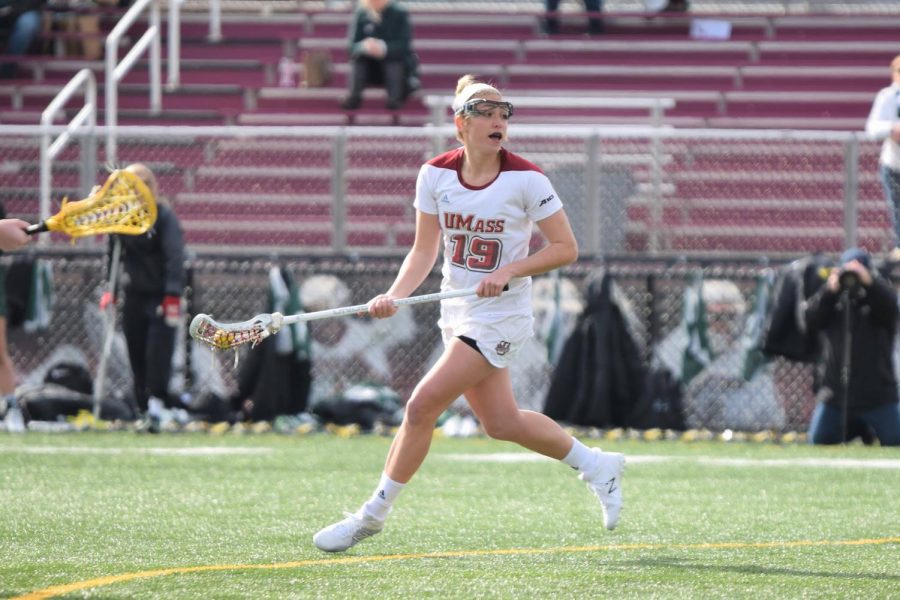 Though it fell short in double-overtime in Saturday’s matchup with No. 23 Cornell, the Massachusetts women’s lacrosse team is looking to build off its confidence moving forward to Wednesday’s game against Harvard.

The loss to Cornell was the Minutewomen’s second straight overtime game and their third straight game that was determined by a single goal. This stretch of games includes a win over Connecticut that was decided with only seven seconds remaining. Though not all the games on this streak have gone its way, redshirt senior Hannah Burnett believes it’s helped build experience for the team.

Burnett — who is responsible for assisting the game winning goal versus Connecticut and scoring the game winner in overtime versus Ohio State — has been a key contributor on and off the field for the Minutewomen (4-3) this season. Leading the team in goals with 22, Burnett thinks playing tough competition breeds a tougher team, which will be useful in Wednesday’s matchup versus Harvard (3-3) and moving forward.

“The only way we’re going to get better is if we play better teams, and Harvard is a good team as well,” said Burnett. “I think it’ll be good going into A-10s next week as well.”

Building this experience early into the season could prove crucial for UMass. Carrying 13 freshmen and a handful of new starters this season, playing through critical situations early on could prove to be beneficial in the long run for the team.

Though the Minutewomen came up short in their previous game, UMass coach Angela McMahon thinks that confidence has been built for the team as it learns from its mistakes in the last couple of games.

“I think it builds confidence,” said McMahon. “I think we knew that there were some missed opportunities [last game], but we feel pretty confident that we can make some of the adjustments to not have those opportunities go to waste again.”

Harvard assistant coach Kelsey McGovern formerly coached for UMass during the 2017 season and was an All-American player for UMass in 2013. Although McGovern knows the UMass system well, McMahon doesn’t believe it will play into Wednesday night’s game.

“I think if we play our game, and we play our strengths, and we play together, we are capable of beating anyone,” said McMahon. “Regardless of what knowledge they might have or what the scout might be. So the focus is on us this game to bring good intensity, energy and to really come together.”

Harvard, which ranks 10th in the nation in goals per game, will look to come out attacking fiercely on Wednesday. If the game does come down to another climactic finish, there’s no doubt that the Minutewomen will be prepared when the time comes.

“We always get together before overtime starts to get each other pumped up,” said Burnett. “Cool, calm and collected is kind of the words that we use because we’ve been there before. We know what to do. We just got to execute.”

Dan McGee can be reached at [email protected] or on Twitter @DMcGeeUMass.