The Minutewomen travel to take on St. Joseph’s 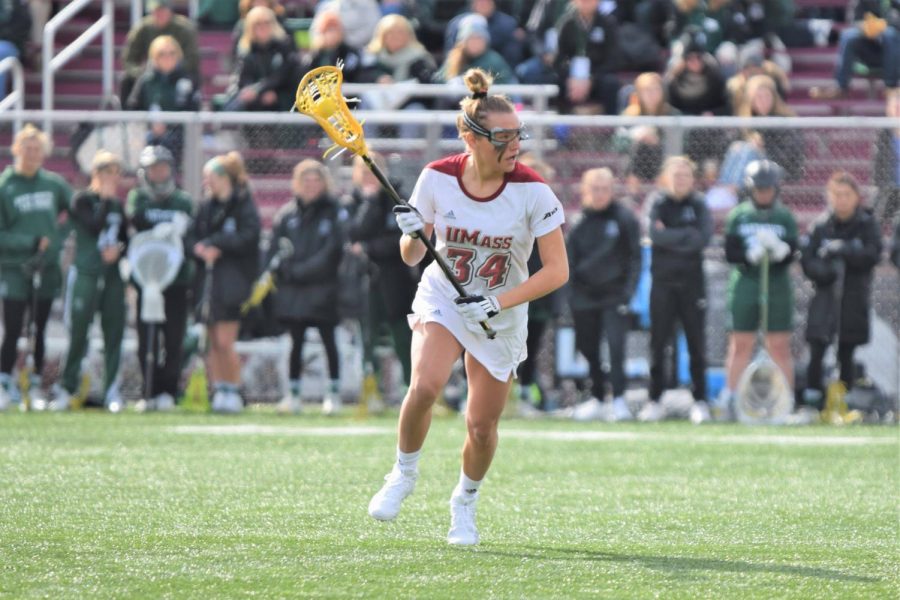 With a win over Harvard last Thursday, the Massachusetts women’s lacrosse team has reached the end of nonconference play and the beginning of Atlantic 10 play.

The Minutewomen (5-3) will begin their quest for a 10th straight conference tournament championship Thursday, when they travel to take on Saint Joseph’s (4-4).

“We feel good about our team and having as many different weapons as possible getting involved because that’s going to be key moving forward; especially looking toward the end of the season, that will be really key,” said UMass coach Angela McMahon.

Some of the weapons that will help the Minutewomen succeed are veteran players, like Hannah Burnett and Holly Turner, both of whom have been high scorers this season, as well as younger players, like Stephanie Croke and Kaitlyn Cerasi, who both scored goals in last Thursday’s win over Harvard.

The veteran players have a large role in shaping the performance of the team. Coach McMahon expects her upperclassmen to come out and make sure that they are setting a tone for the team and the opponents.

“I think it’s definitely to set the tone, be tone setters both offensively, in the midfield and on defense. Overall execution on our offense, taking care of the ball and minimizing turnovers,” McMahon said. “Defensively to just come out really sharp and just be communicators because that for us I think is the key thing to make sure that our defense is on the same page. The upperclassmen within that understand that the little details are critical to starting sharp and setting the tone early. It is all about the details.”

Going into Thursday’s game, the Minutewomen feel confident in their game and work ethic. McMahon hopes that her team will “play aggressive; we want to set the tone across the board.”

The Minutewomen haven’t lost a game to the Hawks since 2005, the latest win being last year’s 24-14 matchup. Yet, the team is ready to play against a team that has been doing well this season.

“They’re a really great team and they’ve got some really great players,” McMahon said. “Their coaching staff is doing a great job of getting their team playing at a higher level. They’ve have some tough competition as well. They’ve had some Top 10 opponents and played them really tough. We’re expecting a physical game. They’re athletic, they’re physical. I think we’re prepared for that.”

With the chance at winning a 10th straight A-10 title at their fingertips, the Minutewomen don’t need any reminders about the massive expectations they face.

“It’s really just focusing in on ourselves,” McMahon said. “I think the pressure’s already there without talking about it. I think our players understand that’s our team goal. They want to make sure that they keep the legacy going, but at the same time, they’re really hard on themselves sometimes because of that too.”

Coach McMahon also said that the team does sometimes put too much pressure on themselves.

“We can be our own worst enemies too,” McMahon added. “It’s about keeping it light and everyone understanding what their role is, and playing together. And when we focus in on that instead of the other things, I think we can pretty much do anything that we want to do.”

Looking forward toward the rest of the season, Massachusetts is taking every game one step at a time, working to repeat as A-10 Champions.

“It’s really about being in the moment, focusing game-to-game, and not getting too far ahead of ourselves,” McMahon noted.

The Minutewomen open Atlantic 10 Conference play against St. Joseph’s in Philadelphia on Thursday at noon.

Emilia Beuger can be reached at [email protected] and followed on Twitter @ebeuger.