Mentees and adoptees: a community bound by a shared link

College students and children celebrate and connect through topic of adoption 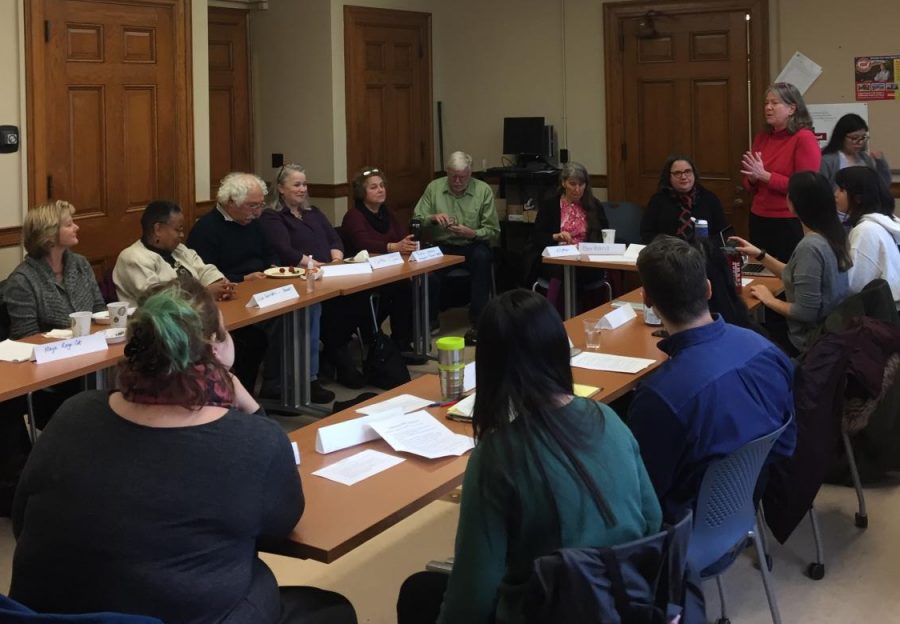 Recently, the Adoption Mentoring Partnership and the Adopted Student Advisory Panel at the University of Massachusetts, held a collaborative event between the two separate but closely linked groups in the company of local families with adopted school-aged children.

The event consisted of icebreaker games, relay races and arts and crafts to foster bonds in an open environment and encourage dialogue on the one defining characteristic in the room: adoption.

Of the two student organizations, the first to form was AMP. Founded roughly seven years ago, its mission is to pair college students who are adopted themselves with adopted children in the local area on the basis of common gender, race and/or adoption scenario.

Ana Gremli is a class of 2016 UMass graduate who majored in early childhood education and psychology. Gremli herself was internationally adopted at the age of two from the city of Chisinau in Moldova, an Eastern European country located between Romania and Ukraine.

Even after graduating, Gremli recalled her time within AMP fondly, seeing it as a way to broaden her worldview on the topic of adoption, which had previously centered around a tight-knit group of fellow families with adopted Moldovan children near New York City.

“Coming to college, I had already kind of had a little bit of a community growing up, but it was great to meet people I had never met before that were adopted,” Gremli said. “I didn’t realize there’s more people out there and there’s more people from all over who are also adopted, not just the three or four people I knew growing up.”

“We would also share a little bit about each of our stories and how our stories kind of play into the topic we were talking about.”

Gremli was a mentor to a younger adopted girl herself, whom she refers to as her “little sister.”

“I would meet up with my little sister about every week if not every other week, and we would just do various activities,” Gremli said. “We’d go to the mall, we’d go to the movies, we would go to the dining halls all the time, we went ice skating, we would play sports, we’d do anything that we wanted just to kind spend time with each other and to get to know each other, just to really build that relationship that was founded on the fact that we were both adopted.”

When asked if she still keeps in contact with her mentee, Gremli replied, “We don’t see each other as often, just because of busy schedules and opposite schedules, but when we do see each other we just pick it up as if time never passed; she’s a real sibling to me.”

“With the AMP program, we found that the college students really valued being with the kids, and they also really valued coming together as a group because there’s a class that goes with it, [Harms] is a part of it, it’s a two-credit course,” Dolan said. “They have articles that they’re reading about adoption and then they’re talking to each other about adoption. For many of them it’s the first time they’ve been in an adoption centric space.”

However, Dolan and Harms expressed past difficulties with procuring mentor-mentee relationships for AMP mostly due to time constraints for college students.

“We always have a hard time recruiting the mentors for the following year,” Harms said. “[Dolan] does an amazing job going and speaking at classes and letting people know about the AMP program…but really being able to reach more, a bigger audience, especially you know this year’s freshmen, this year’s sophomores who might be considering doing this next year is key.”

Senior sociology major and education minor Emma Sander, the current president of ASAP, added, “Originally, I wanted to join the mentoring partnership program, so I reached out to [Dolan]… It turned out, I didn’t have the time to commit to the mentoring partnership, but I still really wanted to be involved in that community and to learn more about adoption through conversation and shared experiences.”

The solution to this dilemma was ASAP.

“[Dolan] and I came up with the idea of the advisory board… having a group of adopted students at UMass,” Sander explained. “So, we formed what was USAAB, which is the UMass Student Adoption Advisory Board, and now we’ve changed our name, because we have RSO status now, as of just last semester.”

Given its newly minted registered student organization status, Sanders hopes that the group will have the opportunity to gain greater recognition, funding and research potentials.

According to Dolan, ASAP was also formed because many of the AMP mentors valued their ability to talk with other students on campus who are also adopted. She indicated that adopted students drawn to ASAP tend to be those who have interest in educating the community about adoption, as well as see these members as leaders in the field of adoption as well.

In an effort to describe the purpose behind ASAP Sander said, “[It] is essentially just to start conversations between adopted communities and then also broadening that to the non-adopted communities outside or people who are connected to adoption. We are really enthusiastic about the community that we get to build within ourselves, but then really getting to open that to everyone else as well as an education standpoint.”

Dolan emphasized that the work ASAP does is not only for adopted children, but for the adoptive parents of these non-biological children.

“Students say just how powerful it was coming together as a group,” Dolan said. “I’m an adoptive parent and I work with parents on campus who have kids who are adopted, and we just struggle with just trying to do the best job we can do and I thought, ‘Wow, if we had students who are adopted and who could give us some insights, kind of advise us, that would be helpful.’”

“I was adopted from China when I was a year old and I have two little sisters who were also adopted from China,” Sander said in a recount of her own story. “I was lucky enough to travel to China with my parents to adopt them and I think that’s how I kind of processed what adoption meant from a very early age, and I don’t think that’s an experience that everybody has… and that was extremely beneficial for helping me process that.”

This perspective helps to drive Sander in her leadership role.

“A lot of the conversations that we have and the work we try to do is about advocating for adopted communities and adopted people who don’t necessarily have the vocabulary or the means to do so for themselves, so we’re talking about a lot of the misconceptions that go around surrounding adoption,” Sander said. “We’re trying to hold events like this to broaden our community and we had an event last year called ‘We Celebrate Adoption.'”

The “We Celebrate Adoption” event mentioned covered a myriad of different topics within the adoption community, according to Sander.

“One table had international versus domestic adoption, one table had foster-care, another had mental health concerns, there was speech and language pathology issues, and then LGBTQ+ issues and how all of that is intertwined in adoption, it was a really interesting conversation starter for all of us,” Sander said.

In a concluding remark at the end of the the event, Sander stated, “We have such a valuable opportunity to learn from each other and each other’s experiences.

“No adoption story is the same, which makes each experience that much more personal. I love celebrating adoption and I love getting to build this loving community with these amazing people.”

Chris McLaughlin can be reached at [email protected]