Minutewomen finally back at Garber Field to take on Harvard 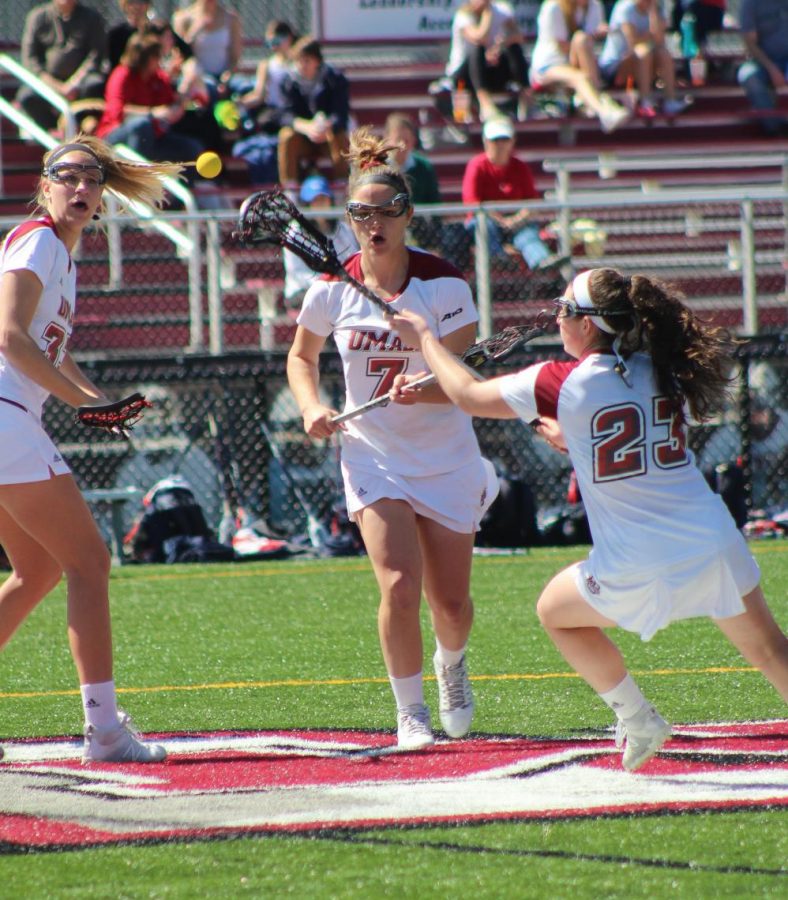 The Massachusetts women’s lacrosse team will be under the lights on Wednesday night, its first chance to play for a home crowd in over a month. Harvard (3-3), a top 10-ranked offense nationally, will be the opponent.

Wednesday evening not only marks the first game at Garber Field since UMass defeated Dartmouth 17-13 on Feb. 17, but it also signals the end of non-conference play. After this matchup, coach Angela McMahon and her players will only see the familiar faces of Atlantic 10 opponents.

However, the Minutewomen must put their focus on preparation for a powerful offense, as Harvard converts goals on slightly over 50 percent of their 30-plus shots each game.

“I have a lot of faith in our defense, and recently, we have been able to hold our opponents to a low number of goals,” said redshirt senior Hannah Burnett. “We have a really good defensive plan for this game specifically. The main thing we have been stressing is communication throughout from defense to middies to attack.”

Keeper Lauren Hiller, along with her defense, has been able to hold every opponent below 15 goals besides No. 5 Boston College.

The Minutewomen expect a fast-paced game with a constant back and forth. In this tight matchup—something UMass is extremely accustomed to this season—the difference might just be whoever takes advantage of their opportunities.

Harvard not only brings a high scoring offense, but they also have former defensive coach and UMass alumna Kelsey McGovern, who knows many of the UMass players and their tendencies well, as an assistant coach.

Despite the insider knowledge available to her opponent, McMahon fully believes the team’s focus should be on itself. Winning the draw has been challenging this year for the Minutewomen, which is why they specifically aim to have a high volume of wins that translate to scoring opportunities against Harvard.

A lot of hard work has been put into facing non-conference opponents such as Harvard—some of which are nationally ranked. Three of the Minutewomen’s first seven games were one-point matches, and two went into overtime.

In these early season games, the team has seen last-second, game-tying goals, younger athletes stepping into their roles and high quality performances from their most clutch players.

But the outcome of this Wednesday’s match could be the difference between heading into conference play with two straight losses and a .500 record, or a 5-3 record that translates to more momentum and confidence.

As for how they look to get it done, McMahon believes it is in the finer details of the gameplay.

“It’s really just executing when we have the ball. The goal is to not have to play as much defense,” she said. “If we can come up with draws, then make those opportunities on offense count, that is key. We need to focus on minimizing turnovers and executing on our shots.”

Part of UMass’ mentality is to have fun while competing and training. The players look forward to playing everyday, but are especially excited to be back at home. They look forward to a simpler routine without travel, but even more so toward the promise of playing for their school in front of electric fans.

The weather might not make for a perfect night, but the Minutewomen are ready to play in the snow if they have to. They have one more day of practice before their last non-conference game against Harvard.

Wednesday’s game is scheduled for 7 p.m.