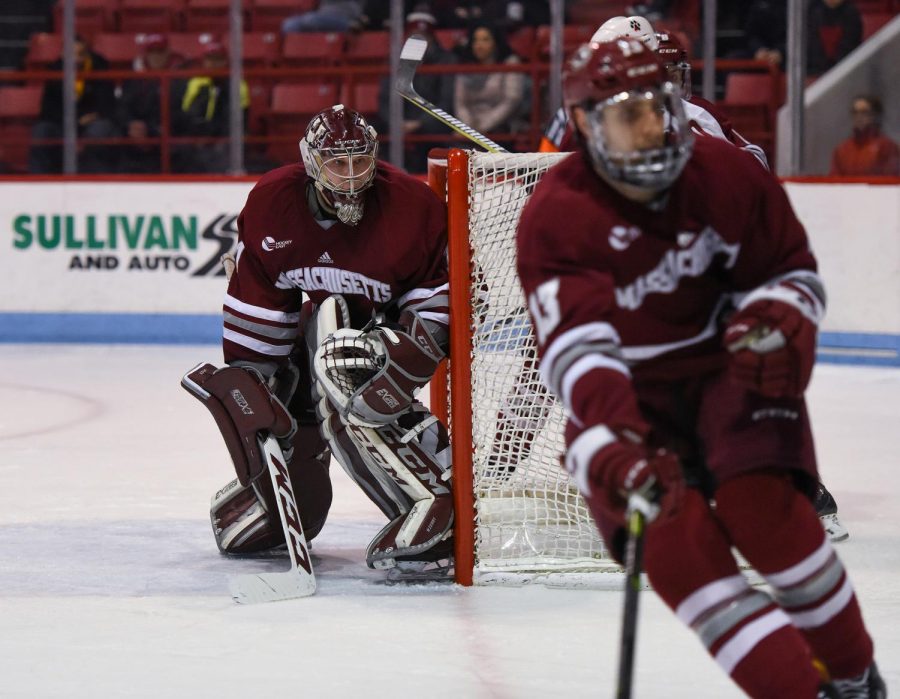 BOSTON—A major focus for the Massachusetts hockey team was to avoid getting into penalty trouble against No. 7 Northeastern in the quarterfinal round of the Hockey East Playoffs.

Only one penalty was assessed to the Minutemen in the entire 60-minute battle but unfortunately for UMass, it was all the Huskies needed to do some damage.

Freshman Jake Gaudet was given a five-minute major for boarding and a subsequent game misconduct, granting Northeastern an extended power play.

First it was Nolan Stevens who redirected a Jeremy Davies point shot to put the Huskies up 1-0 44 seconds into the man-advantage, and then it was Dylan Sikura who unleashed a wicked one-timer slap shot with just 16 seconds left on the power play to double the lead to 2-0.

“Stay out of the penalty box. It’s real simple,” UMass coach Greg Carvel said. “(Northeastern’s) power play’s just too good to give them five minutes. We had two chances to get the puck down the ice at the beginning of that (power play) and if we did maybe it changes things up a little bit, so that was a little frustrating.”

The Minutemen tied the game 2-2 on goals from Austin Albrecht and Brett Boeing in the second and third periods but Sikura struck again over halfway through the third period with a game-winning blast from the slot that trickled through UMass starter Ryan Wischow, making it a 3-2 final.

“I think the biggest thing is just staying out of the box,” Boeing said. “You look at their power play, it’s one of, if not the top power play in the country and 5-on-5 we handled them pretty well, but to get two goals on that power play really hurt us.”

Wischow made 28 saves in just his second start since the beginning of February and looked to be in a solid rhythm for most of the game.

“I had a really good first period, thought I was doing well in the second. My rebound control wasn’t the best tonight but it never really hurt me too much,” Wischow said. “We played well defensively. I thought I was fine, honestly. The second (Northeastern goal) I wanted back and then the third one, I got to find a way to make a save.”

“He can’t let in three goals,” added Carvel. “That’s playoff hockey, whoever scores three goals is going to win, so it’s his job to only let in two.”

Northeastern (22-8-5) was also only called for one penalty as well, a goalie interference call to Patrick Schule, but the Minutemen (17-19-2) couldn’t get much of anything going, barely holding the zone for any of the two-minute power play.

“Our power play, the one that we got, we had a couple bids and for them to score right off the end of it was tough,” Carvel said.

With Game 2 potentially the final game for UMass, shrugging off a tough loss is really the only thing it can do.

“After the penalty we knew what we had to do to come back from it and getting a goal right after gained some momentum and (we) carried it into the third,” Boeing said. “Unfortunately, that third one went in, but we’ll be ready for tomorrow.”