Notebook: UMass takes on George Mason in second round

Minutemen fell to the Patriots twice this year, both in overtime 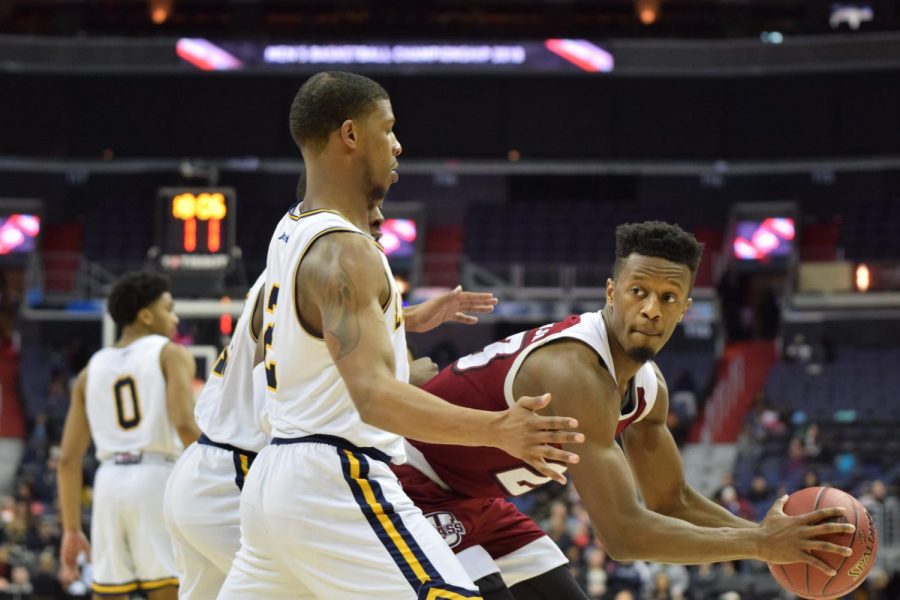 WASHINGTON D.C.—The Massachusetts men’s basketball game earned its way into the second round of the Atlantic 10 tournament with a 69-67 win over La Salle on Wednesday. The No. 13 Minutemen will take on No. 5 George Mason Thursday at 2:30 p.m.

UMass has squared off with the Patriots twice this year, with both games going to overtime. George Mason took the first meeting 80-72 behind guard Otis Livingston’s 33 points. The Patriots would take the second game as well, defeating the Minutemen 78-76.

Much like UMass had not seen the full La Salle squad until the tournament, George Mason has played different Minutemen teams each game. UMass had big men Rashaan Holloway and Chris Baldwin available in the first meeting, and leading scorer Luwane Pipkins missed the second meeting with concussion symptoms.

“We were in two battles with them,” UMass coach Matt McCall said. “The first game we were a completely different team. Both games are different. Our guys are excited to play. Neither one of those games is going to have any impact on this game. We have to go out and execute, we have to follow the game plan.”

Playing with a small bench is tough enough, never mind when your best player gets into foul trouble. That was the case Tuesday, as Pipkins bought a Saul Phiri pump fake and slapped his arm with 13:22 left in the game, sending the sophomore to the bench with four fouls.

The Minutemen have struggled to score without Pipkins, who finished the season second in the A-10 in points this year. Wednesday, it would be C.J. Anderson who would carry the load with Pipkins on the bench.

The senior did not want to see his UMass career end, scoring seven points and dishing a pair of assists in the nine minutes that Pipkins wasn’t in the game.

Anderson would finish the game with 21 points, and also grabbed seven rebounds and tossed four assists.

“C.J. Anderson is playing his best basketball of his UMass career,” McCall said. “I wasn’t here for the first three years of it but I guarantee you that’s the case. I think even when [Pipkins] came back in the game, he deferred a little bit. He kept giving the ball back to C.J. and we kind of played him off the ball.”

Anderson has been playing some of his best basketball down the stretch, playing more aggressive than he had during the early portion of the season. He feels it’s that he’s not trying to leave anything left on the table as his career winds to an end.

“It’s been a long, long journey so far, but I mean, we have so much left in our team to keep winning, keep playing, keep battling,” Anderson said. “I just preach to the guys, we’re ready. We just celebrate it, we just won a good game. That’s one. It’s time to get back to the boards and get ready for the next one.”

Due to the fouls, Pipkins played just 26 minutes, one of his lowest totals of the season. While McCall would have liked to have had him out there more, it may serve as a benefit as the sophomore should have fairly fresh legs after a short turnaround between games.

One of the main reasons for the UMass struggles this season has been its play on the defensive end. The Minutemen finished dead last in the A-10 in scoring defense, surrendering 79.8 points per game in conference play. McCall has been preaching all year that it is very tough to win college basketball games when a team scores 80 points on you, and on Tuesday UMass was able to contain the Explorer offense throughout.

La Salle shot just 36.8 percent from the field, including going 1-16 from downtown. The Minutemen also didn’t dig themselves in a hole early, holding the Explorers to just 28 points in the first half. Despite committing 15 turnovers, UMass was able to hustle back and not let it beat them, giving up a mere eight points off turnovers and just one fast break bucket.

The Minutemen will need a similar defensive performance on Wednesday in order to keep their season alive.