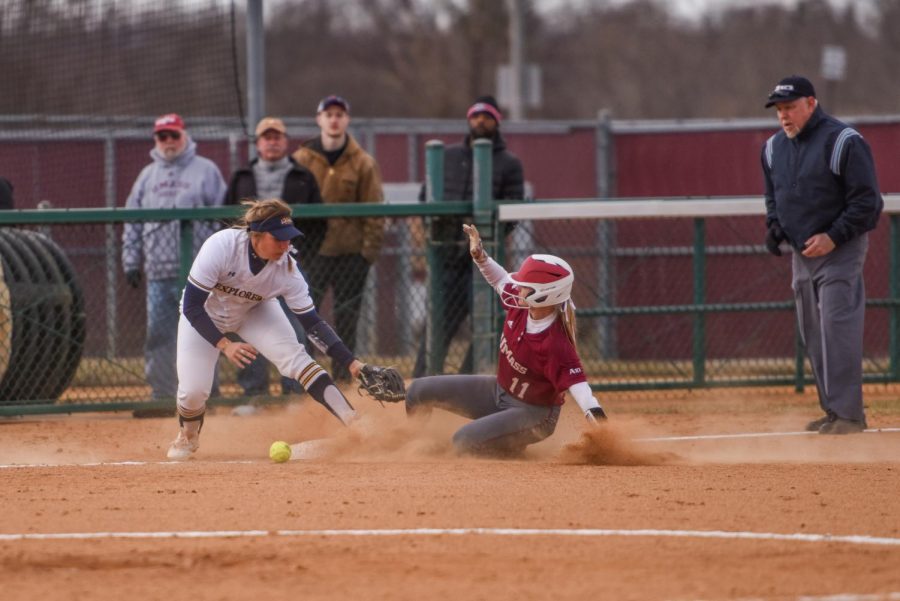 The Massachusetts softball team had an offensive explosion on Saturday to begin Atlantic 10 play, blowing out La Salle twice, the first game 7-0 and the second 11-3.

The Minutewomen (13-10, 2-0 A-10) scored a combined 18 runs in Saturday’s doubleheader while only surrendering three. The Explorers (7-13, 0-2 A-10) just couldn’t get any offense going and couldn’t quell the Minutewomen’s bats.

“It’s a great start,” said UMass coach Kristi Stefanoni. “We could have done a lot of things differently or better to not put ourselves in tough situations, but I told them overall, it’s a great two wins.”

In the second game of the day, with UMass up 4-3 heading into the sixth, the Minutewomen exploded for five runs to extend their lead to 9-3. The offensive outburst began with an RBI single to left field by Erin Stacevicz to make it 5-3. Madison Gimpl then put the game out of reach for La Salle with a two-RBI single.

In the seventh, the Minutewomen tacked on two more runs to make it 11-3.

Prior to the offensive explosion in the sixth, the game was a close one. UMass got out to a 3-0 lead, but watched it turn into a 3-2 lead in the third inning.

In the top of the fourth, a Stacevicz single to right field brought home a run to make it 4-2. In the bottom half of the inning, La Salle executed a double steal and cut the lead to 4-3, the final run La Salle would score.

Freshman ace Kiara Oliver got the nod in game two and went five innings, allowing three earned runs on two hits and seven strikeouts. Quinn Breidenbach then came in for the final two innings, allowing one hit and no runs, striking out four.

“I think it was a great first day,” said Stavinoha. “The offense exploded for a bunch of hits, it was awesome. We were scoring runs in good situations and the pitchers did a good job keeping them at bay.”

In the first game of the day, the Minutewomen wouldn’t take long to get the offense going as in the second inning, freshmen Jackie Kelley hit a bloop RBI double down the right field line to put the Minutewomen up 2-0.

Later in the inning, Jena Cozza singled up the middle, plating two, to make it 3-0 UMass.

In the fourth, Stacevicz would hit a bases-loaded grounder between shortstop and third base to make it 4-0, and a single by Gimpl would extend the lead to 5-0.

Though there were no home runs in the game, Stavinoha hit what would have been her first of the season but Marissa Ewald, La Salle’s right fielder, reached over the fence and robbed it to save a run.

The Minutewomen would make up for it with another Cozza RBI single to make it 6-0, as Cozza knocked in a team-high three runs in game one.

To finish things off, freshman Amy Smith added an RBI single to center in the seventh to extend the lead to seven for the Minutewomen. That’s where it would finish, as UMass would take game one 7-0.

After two blowout wins, the Minutewomen were all optimism.

“I just like the way they’re coming out and playing softball right now,” said Stefanoni. “Getting 13-15 hits a game, probably last year during conference I don’t even know if that was happening for us.

“Last year when we played La Salle, each game was won or lost by one run and I don’t think the hit column was looking like it did today.”

“Honestly, this year we just have a lot of great chemistry,” the shortstop said. “Everybody’s playing for each other. We’re playing some UMass, blue-collar softball. We just want to hit the ball and score some runs.”

For Stefanoni and the rest of her squad, they couldn’t be any happier to be playing back at home.

“I love this place,” said Stefanoni. “I would rather have the biggest game of my life here than someplace else.”

The Minutewomen continue their season with the final game of the three-game set against La Salle Sunday at 12 p.m. at Sortino Field.