UMass comes from behind for second consecutive game but falls short 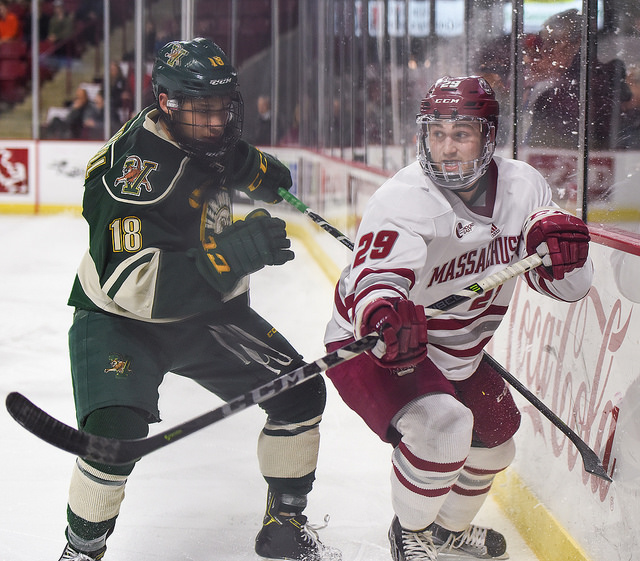 For the fans who missed Game One, Game Two did not disappoint.

The Massachusetts hockey team erased a two-goal deficit for the second consecutive night before heading into overtime for the second time in as many nights with Vermont.

Unlike Thursday night where both teams battled through almost an entire extra 20 minutes before UMass (16-18-2) stole the victory with 3.3 seconds left, Friday night the Catamounts (10-19-7) ended things early notching the game-winning goal just 12 seconds after the puck dropped to snatch the win, 4-3.

“It’s not really odd in the playoffs,” UMass coach Greg Carvel said about the frequency of overtime games. “It gets down to mental toughness, we had to grind a goal with three seconds left (Thursday) night and tonight three seconds into the game we allowed them to score easily.”

On Jan. 12 the Catamounts forced overtime on home ice after Matt O’Donnell net the equalizer with just over five minutes left in the final frame. Friday night it was Rob Darrar who knot the game at 3-3 at 8:05 of the third period.

“All of the (previous) games have been really hard fought over the years. I don’t think there’s been any real blowouts,” Vermont coach Kevin Sneddon said. “They’ve all been pretty exciting, one-goal hockey games or ties and it doesn’t surprise me going into this series. You kind of could predict this that it might go to three games and that every game would be hard fought.”

The Mullins Center saw its largest crowd this season with nearly 5,800 fans. The Minutemen have not drawn a crowd larger than 3,934 this season and haven’t seen such a packed stadium since UMass played Boston College in front of 5,939 fans in 2014.

“I’ve coached a lot of games in this building and I haven’t seen that before. That crowd was fantastic,” Sneddon said. “I think that was kind of the sixth player at times for UMass, they seemed to have a lot of energy off the crowd.”

Out of all the games Carvel has coached in the Mullins Center he said Friday night had the most prominent turnout he had ever seen. He would’ve liked to have seen a win to keep those crowds and prompt a more consistent showing in the future.

Austin Plevy, who’s goal cut the Catamount’s lead in half to 2-1 at 7:29 in the middle frame, believes that recovery is the most important thing in preparation for Sunday.

“Obviously two overtime games, you have to take care of your body,” Plevy said. “Get ready to go, it’s going to be a war on Sunday. Both teams (with) the potential to end their year and nobody wants that.”

Regardless of the outcome, Sunday will be the last home game of the season for the Minutemen and a desperate UMass club will look to keep its season alive.

“Obviously I wanted to win tonight but I’m not that upset that we have a third game because I want to see these young guys grow up, because they played young tonight,” Carvel said.

Mollie Walker can be reached at [email protected] or on Twitter @MWalker2019.