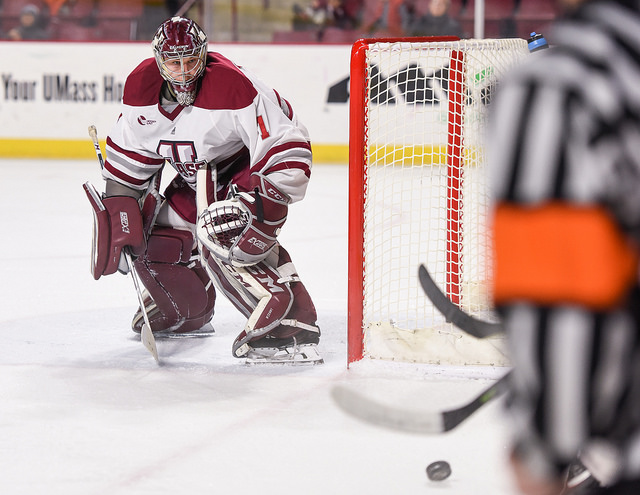 Sunday morning Ryan Wischow woke up to a text from UMass coach Greg Carvel, letting him know it was his turn to take the net.

The sophomore had not seen a second of ice time since Feb. 3 at UNH, eight games ago, where he let up three goals before he would find himself on the bench for over a month. Sunday afternoon, Wischow saved 30 of 31 shots to avoid elimination and help the Massachusetts hockey team knock Vermont out of the playoffs in a 5-1 battle.

Freshman Matt Murray ended his eight-game run in net after sustaining an injury in the second period Friday night that ultimately took him out of the starting position. Carvel claims that such a switch had no effect in the locker room.

“We split both those goalies for three quarters of the year,” Carvel said. “The kids who are out of the lineup ,what you tell them consistently is listen, you never know when your opportunity is going to pop up and it’s up to you to be ready. It popped up at a very unusual time.”

After one period Wischow had racked up 10 saves while the Minutemen had planted a comfortable two-goal lead for themselves heading into the middle frame. He says getting on the board first took some pressure off himself and allowed him to ease into the game.

Carvel believes it wasn’t until the second period that Wischow was seriously contested considering the first period saw an impressive offensive display from the Minutemen.

“I think we did a good job limiting the scoring chances, in the first period [Wischow] had two or three good saves,” Carvel said. “I think there were two, three, or four times where he made big saves for us that kept the game pretty much in our control.”

Just two minutes into the middle frame, Ivan Chukarov found himself pinched too deep, allowing Bryce Misley to attack the net before Wischow swallowed the puck into his chest keeping the Catamounts off the board.

A slap shot from Matt O’Donnell at 4:53 in the second was the only shot that made its way past Wischow.

“That’s extremely tough for Ryan, he hasn’t played in a while and It was a must-win game,” Carvel said. “I think he was able to ease into the game the way we needed him to, because that’s very difficult to come off the bench when you haven’t played in that situation. Very proud of what he was able to do for us tonight.”

With just 1:55 remaining in the second period, Ross Colton attempted to knot the game at 2-2 with a hard shot on the power play that Wischow snatched with his glove. The 6-foot-1 netminder fended off all three Catamount power plays.

“He certainly played well, I thought Murray had a good series too,” Sneddon said. “That’s a nice couple of cards to have in your pocket going into the Northeastern series, having two goalies that are playing really well. I thought it was a good goaltender battle all series.”

Wischow said that last season was incredibly difficult for him, as well as other returning players on the roster, given the struggle to stay out of the losing column. He wanted to play for all his teammates who had endured that season and deserved the chance to advance to the next round.

“Obviously it’s the last game of the season potentially, you got to play well you got to find a way to get a win,” Wischow said. “You got to help the guys out and that’s what I tried to do today.”

Mollie Walker can be reached at [email protected] or followed on Twitter at MWalker2019.