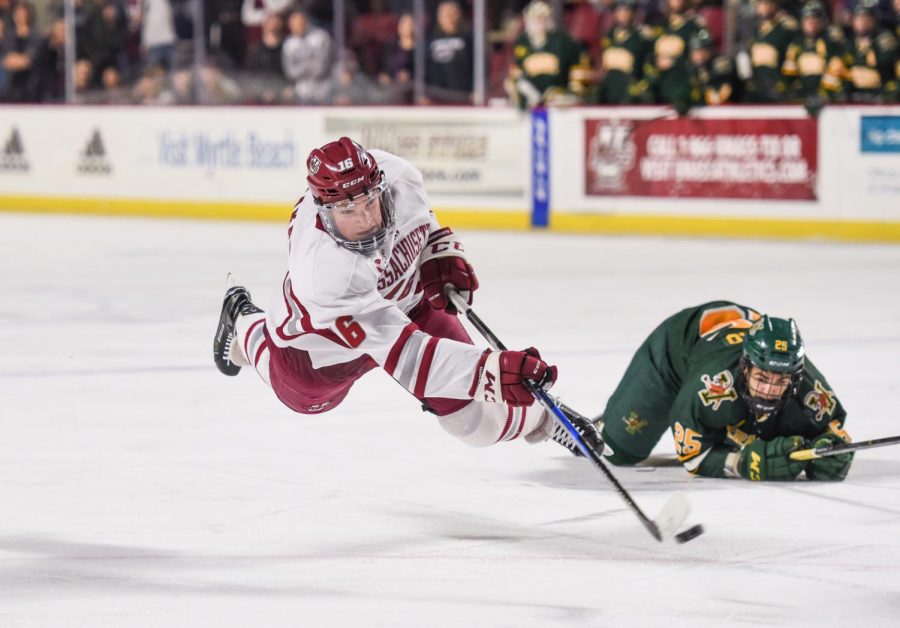 If hockey was a game of halves and not periods, the Massachusetts hockey team would be feeling a whole lot differently right about now.

UMass (16-17-2, 9-13-2 Hockey East Association) beat Vermont, 3-2, in an overtime thriller Thursday night at the Mullins Center, scoring three unanswered goals to snatch the Game One victory away from the Catamounts (9-19-7, 6-12-6 Hockey East) in the opening round of the Hockey East Playoffs.

John Leonard’s goal 59 seconds into the third period gave life to the Minutemen and then Cale Makar scored a dazzling end-to-end marker to tie the game at 2-2.

Overtime was needed and it appeared the game would stretch on with the clock winding down in the first extra period. But with time still showing Leonard jolted into the UVM D-zone and dished a backhand pass to a streaking Philip Lagunov and the puck ricocheted off Lagunov and into the back of the Catamount with just 3.3 seconds showing on the clock.

The call was initially immediately waved off but after review, it was deemed a good goal, putting UMass up 1-0 in the series.

“It was a good playoff game, it was entertaining,” UMass coach Greg Carvel said. “I thought both teams well, played hard and our best players rose to the top.”

UVM appeared to be in full control with 40 minutes in the books up 2-0. UMass looked to be chasing the game and weren’t getting the bounces to fall its way.

The Catamounts scored on a 5-on-3 power play following Niko Hildenbrand roughing and an Ivan Chukarov cross-checking penalties late in the second period.

The Minutemen needed a boost and got one when UVM forward Jarrid Privitera was assessed a five-minute major for spearing and a 10-minute game misconduct.

It took almost four minutes but UMass capitalized on Leonard’s quick strike in the third. A visible up-tick in the Minutemen’s pace was apparent and it eventually led them to the dramatic, come-from-behind win.

“On that power play going into the third period down two goals, you need to come away with at least one (goal) on that power play,” Leonard said. “We drew up a few things and just tried taking it to the back post and was lucky enough to five-hole.”

Makar’s jaw-dropping equalizer also added fuel to UMass’ fire and capped off an otherwise outstanding performance from the freshman defenseman.

“I did a lot of thinking these past few weeks in terms of my game and refined a few things,” Makar, who finished with a team-high seven shots, said. “Everything is starting to come together and I think I am building off that.”

“He was ready to pop,” Carvel said about Makar’s recent elevation in his game. “Tonight, he was just at a different level. He’s a competitive with a lot of pride to go along with all that ability and skill. When he puts it all together and he gets determined, he’s a special player. He was a difference-maker tonight.”

In his seventh straight start in net Matt Murray was steady, especially in the third and overtime periods racking up 17 saves, swallowing most of them up.

“I thought Murray just had to be solid in the net,” Carvel said. “We executed a lot of our game plan.”

Ryan Ames can be reached at [email protected] and followed on Twitter @_RyanAmes.