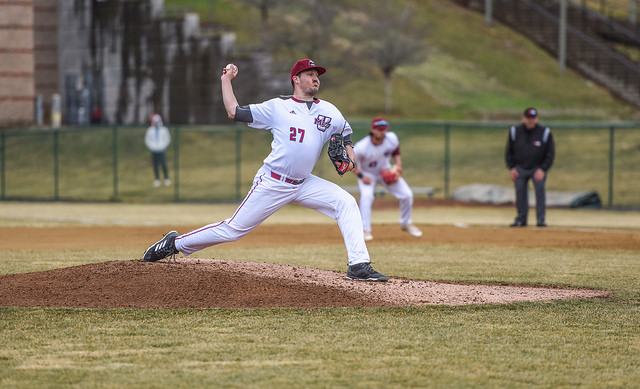 In the top of the ninth inning, the Massachusetts baseball team led St. Bonaventure 5-1, but coming into the inning there had been a pitching change: freshman Sam Cooper was on the mound.

After recording the first out on a fly ball to right field, Cooper allowed two runs to score later in the inning on a double by sophomore Jeff Palczewski that scored two to make the score 5-3.

Following a mound visit, UMass coach Matt Reynolds took Cooper out of the game and replaced him with junior Casey Aubin. Aubin came in and induced two pop outs, giving the Minutemen (9-6, 2-2 Atlantic-10 Conference) the victory 5-3 over the Bonnies (4-13, 0-4 A-10).

“I was very proud of them,” Reynolds said. “That was one of our best baseball games we’ve played all year in terms of execution wise.”

UMass was perfect on stolen base attempts and laid down a safety squeeze bunt in the fourth inning off the bat of junior Ryan Lever, which made it 3-1 at the time.

Lever finished the day 1-for-3 with a double and two RBIs, furthering his hit streat to 14 games. Lever also hit a sacrifice fly in the game.

“I’m just doing my role on the team and not trying to do too much out there and just trying to execute our plays,” Lever said.

“It was great, that’s what we need to get out of guys,” Reynolds said of Lever. “His safety squeeze was absolutely perfect and he came up with a sacrifice fly when we needed him to… It was exactly what we expect out of him, very proud of him, very good job.”

The Minutemen got on the board in the second inning, courtesy of a bloop single by senior Keith Linnane and never trailed past that point.

On the opposite side of the ball, Reynolds sent his ace Justin Lasko to the mound in the first of three vs. the Bonnies.

With the victory, Lasko’s record improves to 2-1. He threw 107 pitches and allowed seven hits, and one run. He struck out four and walked none.

“I thought it was solid, I think the thing with Justin is there’s more to come,” Reynolds said. “We know we’re going to get a gutsy performance from him every time whether he has his best stuff or he doesn’t. That was what we got again; it was one run ball in eight innings, that’s all we can ask for.”

“I threw pretty well, I was pretty efficient I think,” Lasko said. “107 (pitches) in eight (innings). I got our there, threw strikes and got ahead of guys. I was able to get some easy outs when I needed them and get the big ones when I needed to as well. “

The first-year skipper said that he is taking Friday’s win as a learning opportunity, but unlike the past, he says that it is in a much more positive way. Friday he looked at it from a perspective of being able to beat a good pitcher instead of trying to learn from mistakes.

Game two of the three-game set is scheduled for Saturday. First pitch is schedule for 1 p.m.

“We have to put this one behind us,” Reynolds said. “We took care of business, but like I told the guys at the beginning of the year every single A-10 game is as important as the last.

“If we want to get into the playoffs, we have to make sure we take an attitude every game like it’s the 24th game and we need that win to get ourselves in because that’s often where you find yourselves. Put it behind us and try to get the middle one here.”