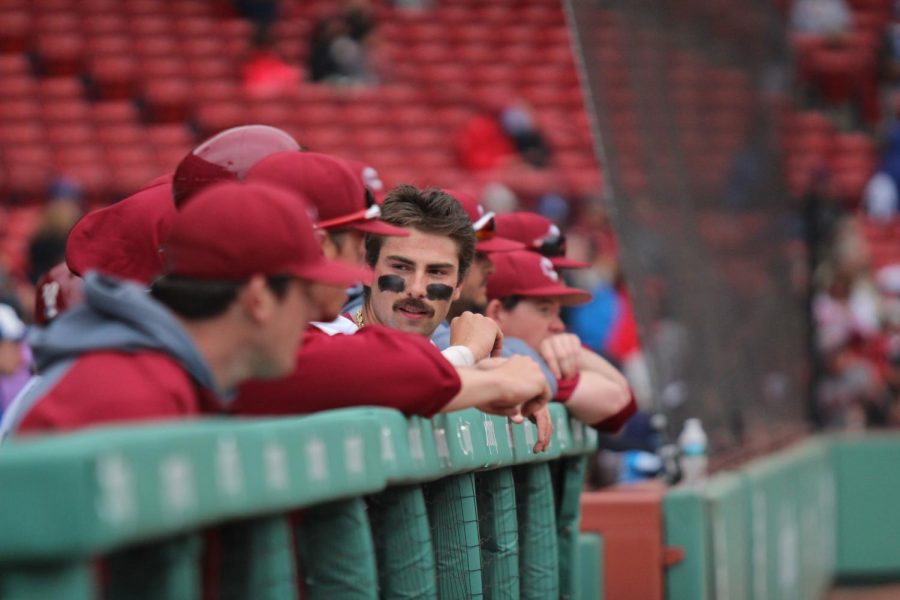 ALBANY, NY—The Massachusetts baseball team rounded out its early season away game stretch with an 8-7 victory over the University of Albany Tuesday afternoon. The contest counted as the Minutemen’s 14th road game this season before they begin a four-game skid at home.

“[Road games have been] pretty solid,” UMass coach Matt Reynolds said. “It’s difficult to travel around and play in different ballparks. But they did a nice job handling it and they’ve got a great attitude about playing the games wherever we have to play them.”

Through UMass’ first handful of games this season they’ve traveled to Kissimmee and Winter Haven, Florida, Richmond, Virginia, as well as one game at the New England Baseball Complex in Northborough, Massachusetts. One would think Northborough would be like a home game, but at an hour and 20 minutes away, it’s still a hike.

“It definitely takes a toll, getting back late, especially on those long bus rides,” Nolan Kessinger said. “Schoolwork is the toughest to keep up with but we just try to come out and play hard every day and try to get our work done.”

Reynolds said he hasn’t seen the extensive traveling take a major toll on his players yet and hopes that he never does. He believes the squad genuinely enjoys being at the fields and has positive attitudes heading into every game.

The first-year head coach prioritizes recovery and has been attempting to give certain positions necessary breaks.

“We’ve tried, where we can and we can’t do it at every position because there are some guys who have to go out there every single day; we’ve tried to get guys strategically some rest,” Reynolds said. “We’re trying to keep guys healthy and rested as best as we can for Atlantic 10 play.”

With no home games comes an extensive travel schedule. For the Minutemen, three states in a week and a half can have an effect on the team’s ability to perform. Battling with airports, discomfort from air travel and overall exhaustion through the first month of play, UMass has showed resilience.

“On the bus or plane it’s tough to come out and play hard and have energy,” Cooper Mrowka said. “Our guys really showed true grit and passion, getting off the bus, getting stretched and doing what we have to do to get into games and win them.”

UMass is coming off a three-game series in Richmond against the Spiders that saw comfortable low 60-degree weather. Venturing to Albany, the Minutemen had a change of scenery and braced 40 degree chills and strong winds in New York.

Reynolds was grateful for the Richmond series, as they interrupted his team’s familiarity with the high temperatures of Florida. Though he believes that no matter what whether conditions UMass plays in, it should never be an excuse for losing.

“I think first and foremost they need to understand that they play baseball for the University of Massachusetts and they’re going to play cold baseball games,” Reynolds said. “That’s just part of the gig.”

Mrowka felt the New York air was a definite change of pace from the humidity of Florida but was happy to see it have little to no effect on his teammates as they pulled out the win over the Great Danes.

“I’m proud of what we’ve done so far and I’m looking forward to some home games.”