UMass blown out at against Richmond 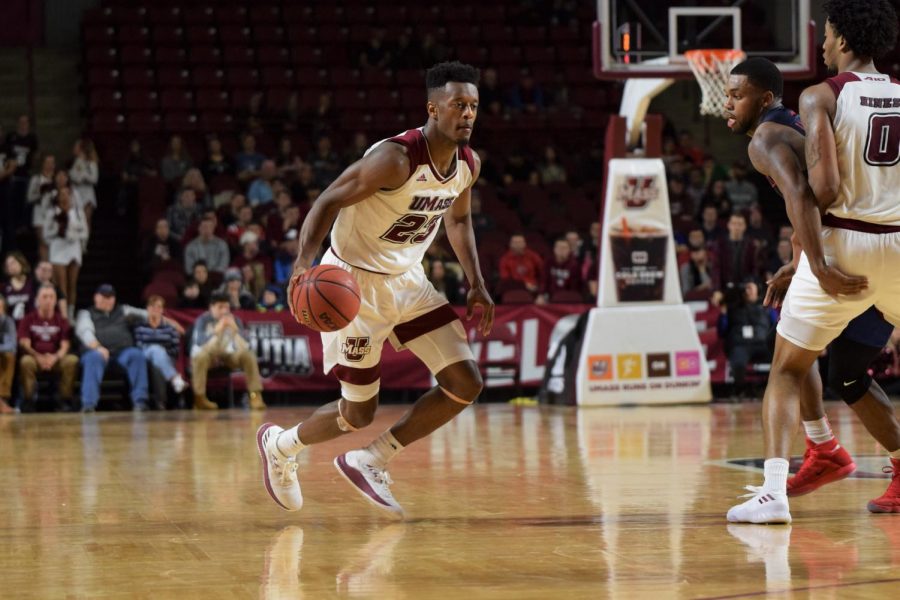 The Massachusetts men’s basketball team entered Wednesday’s game against Richmond on a five-game skid, but had an opportunity to end it as the Spiders had also been struggling lately, losers of their last five as well.

During the slide, the Minutemen (11-19, 4-13 Atlantic 10) had been able to keep games close, losing each of the last three by under five points. That all changed against Richmond, as the Spider offense shot 57 percent from the field in a 90-65 rout of UMass.

The Minutemen kept the score close early, and were down only one with 4:17 remaining in the first half. Richmond (10-19, 8-9 A-10) took an eight-point lead into the break but outscored UMass 50-33 in the final 20 minutes. The game was broken open early in the second half when the Spiders went on a 17-5 run.

“We didn’t have any competitive fight to start the game. We got down early,” UMass coach Matt McCall said. “Defensively, we were atrocious. We didn’t do our job when we were supposed to do our job.

Forward Grant Golden led Richmond with 26 points and 11 rebounds while guard Nick Sherod chipped in with 19 points of his own.

Senior C.J. Anderson led the Minutemen with 22 points, 18 coming in the first half. Sophomore Luwane Pipkins, returning after missing the last game due to concussion symptoms, came off the bench but was not his normal self. The A-10’s leading scorer was 5-17 from the field, 2-10 from three, finishing with 14 points.

McCall hopes his team can put this game in the past and move on, as UMass has just two more guaranteed games remaining.

“It’s hard to forget about tonight right away,” McCall said. “You get embarrassed on the road, didn’t play well at all in any facet of the game. We have a midnight rule, we have to check it at midnight and come in tomorrow with a lot of energy to get better and get prepared for a very good Duquesne team.”

Wednesday’s loss was one of the few nights where the Minutemen looked like a team that was fatigued. The UMass starters have been forced to log extensive minutes throughout the season due to injuries and suspensions, and McCall understands the burden of being physically tired, but still wants to see some fight in his squad.

“It’s been a long year,” McCall said. “Guys have been playing an enormous amount of minutes, but you can look into a guy’s face and in his eyes when he’s ready to compete. We didn’t have that from enough guys tonight. I thought certain guys did, but a lot of guys didn’t, and that’s the disappointing part.”

The 90 points surrendered marks the ninth time in 10 games that the Minutemen have given up over 80 points. UMass currently sits in 13 in the A-10 in scoring defense, allowing 70.5 per game.

While the defense has struggled, finding offense hadn’t been a problem for the Minutemen, yet UMass was never able to get in sync Wednesday. The Minutemen shot 42 percent from the field, turning the ball over 15 times which Spiders were able to cash in for 25 points.

With Senior Night on Saturday against Duquesne, McCall hopes his team can go back to playing inspired basketball.