Tibetan students at UMass Amherst, professors and US and state representatives are advocating for an end to the contract with the Confucius Institute 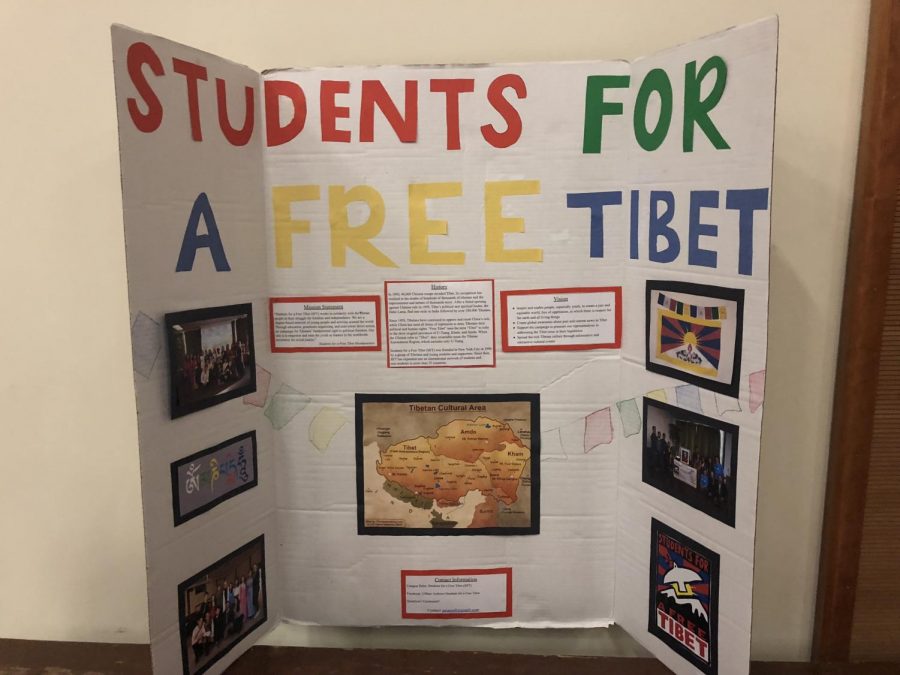 Tibetan students, outside advocates and state representatives are putting pressure on UMass Boston to end its contract with its Confucius Institute, a Chinese-run center that some accuse of censoring information and putting college students’ academic freedom at risk.

More than 90 Confucius Institutes exist on college campuses across the world; UMass Boston’s originated as a result of a partnership between the UMass system and Hanban, the Chinese agency that, according to its website, promotes Chinese culture and language internationally. The institute was established in 2006 and then became a partnership with only UMass Boston and Hanban when a successor agreement was signed in 2013.

That agreement, however, is set to expire April 8. Earlier this year, given that the agreement was ending, UMass Boston interim chancellor Barry Mills appointed a faculty review committee and asked it to conduct an in-depth review of the Confucius Institute and to offer a recommendation about future arrangements. The committee is supposed to complete its work this week, according to Robert Connolly, interim vice chancellor for communications at UMass Boston.

In anticipation of the contract’s expiration, Tibetan students at UMass Amherst are advocating for UMass Boston to opt not to renew it. Their core issues with the institute concern how the current contract is structured and their belief that the institute is part of a larger “soft power” campaign by the Chinese government to infiltrate American colleges.

“They are claiming to just be a program that teaches Chinese language and Chinese culture, but in reality, they’re actually promoting censorship,” said Tenzin Tseyang, a Tibetan student at UMass Amherst and a sophomore psychology major.

Tseyang is the president of UMass Amherst Students for a Free Tibet, a small registered student organization at UMass, composed of approximately 14 students — the majority of whom are Tibetan. It acts as UMass’ chapter of a larger international network that “works in solidarity with the Tibetan people in their struggle for freedom and independence,” according to SFT’s website.

Tseyang was initially made aware of UMass Boston and the Confucius Institute’s looming contract expiration by UMass Boston’s SFT chapter. Because they’re part of the same UMass community, “they told us we should really try to do what we can and create momentum here at UMass Amherst,” she said.

On March 20, she and 17 other individuals — including UMass Boston professors and students and Tibetan advocates in the greater Boston area — sent a letter addressed to UMass Boston interim chancellor Barry Mills, urging him to ensure that the contract between the University and the Confucius Institute not be renewed. In the letter, the 18 co-signers stated their opposition to the written contract, which they obtained through a public records request.

“The terms to which the university has agreed in order to host the Institute are deeply disturbing. We do not understand how UMass Boston could agree to follow the ‘laws and regulations’ of China — a one-party authoritarian state — in the operation of the Confucius Institute, as well as agree to cede academic control to the Chinese authorities,” a portion of the letter states.

Tseyang added that the Confucius Institute is “taking over the concept of American academic freedom, and in the contracts they’ve signed with these universities, it specifically says that the university obeys to Chinese law.”

The article of the contract that Tseyang appears to be referring states, “The institute must accept the assessment of the [Hanban] Headquarters on the teaching quality.”

The same article also states, “The Institute activities must be in accordance with the Constitution and By-Laws, and also respect cultural custom, shall not contravene the laws and regulations, both in the United States and China.”

In addition to the letter sent to Mills by Tseyang and the 17 others advocates, U.S. Rep. Seth Moulton (D-MA) sent letters to not only UMass Boston and Tufts University — the only two colleges in Massachusetts with Confucius Institutes on their campuses — but to 38 other colleges in Massachusetts. In the letters, he urges all the addressed colleges to resist Chinese government efforts to establish institutes on their campuses.

“The Chinese government has been clear in its goal and purpose for creating and expanding Confucius Institutes throughout the country,” Moulton states in his letters, “namely to distort academic discourse on China, threaten and silence defenders of human rights, and create a climate intolerant of dissent or open discussion.”

However, Baifeng Sun, the director of the Confucius Institute at UMass Boston, views the institute as an organization that promotes academic dialogue, aiming to make peoples’ lives better.

Sun has worked for 13 years teaching at middle schools in China and five years teaching elementary and middle schools in Milton and Cambridge, according to the UMass Boston Confucius Institute’s website; she has worked for the Confucius Institute since 2004. When asked by the Massachusetts Daily Collegian whether or not she hopes UMass Boston renews the institute’s contract, she said, “Well of course, I hope it continues.”

In relation to the publicity the Confucius Institute has received, Sun said, “Always see the facts. Actions talk louder than words.” She noted that people can find the facts about the institute on their website.

“That’s the truth. We can’t lie to the public,” she said.

“It’s really up to the University of Massachusetts Boston to make a decision,” Gao said.

For some opposing the partnership though, including Dahlha Cheshatsang, a sophomore biology major and vice president of UMass Amherst’s SFT chapter, the possibility of the partnership ending appears realistic, as other U.S. colleges, like the University of Chicago, have done so.

“Although there are over 90 Confucius Institutes spread across America…over the years, several universities have terminated their contracts with the Confucius Institute, including UChicago, Penn State University and McMaster University in Canada, so there [are] other universities taking action, and we really want to make UMass Boston the next in line,” Cheshatsang said.

Speaking on colleges that still are maintaining their partnership, Cheshatsang pointed out North Carolina State University. In 2009, the Dalai Lama, the spiritual leader of Tibet, was supposed to speak at the university. However, the university cancelled the event, reportedly to avoid offending China.

“It was a completely harmless meeting to talk about peace in the world and Buddhism,” Cheshatsang said.

Lhadon Tethong, director of the Tibet Action Institute, an organization that advocates for the rights and freedom of Tibetans, was another co-signer of the letter sent to Mills, and has helped spearhead some of the advocacy efforts in and around Boston.

Some of the progress Tibet Action has made in the past month, Tethong said, includes the appointment of a faculty review committee at UMass Boston. According to Tethong, as she and the organization understands, it is not a standard process for a university to establish “a special review committee,” but the appointment is a result of the organization’s “campaign and the controversy.”

Tethong said that Tibet Action has been watching the Confucius Institute at UMass Boston for a number of years, and according to her, it’s not just organizations that are concerned with the growth of the Confucius Institute: “people, citizens, academics — people who have long been concerned about human rights, religious freedom, Tibet, Taiwan — you name it” are also concerned, she said.

Tethong said the grant showed her that the institute was not solely concerned with just cultural and language education of college students, but leading a push into local area schools. The case of Cambridge Rindge and Latin School is particularly noteworthy, Tethong said, as a large number of Tibetan students attend and have graduated from the school — many Tibetans started settling in the Boston area in the 1990s, she noted, after fleeing Tibet due to Chinese occupation of their homeland.

“They converted an existing Chinese learning program to a Confucius Classroom,” Tethong said, adding that this act, along with how the institute conducted the new classroom’s inauguration, pushed her and Tibet Action members to act in effort to close UMass Boston’s institute.

“We saw advertised online through the Confucius Institute at UMass Boston that the Cambridge Rindge and Latin School not only had inaugurated a Confucius Classroom in October of 2017, but they had celebrated with a performance with a dance group from China, sponsored by the Confucius Institute headquarters — which means the Chinese government — to come and perform at this inauguration to dress up as Tibetans, and they basically presented Chinese propaganda on Tibet,” she said.

Tethong said that the performance was “problematic on so many levels.”

“To actually have a presentation like this, which is essentially Chinese government propaganda of the happy, dancing Tibetan culture…is really offensive and unacceptable to us,” she said.

In terms of the history of Confucius Institutes, the institutes were launched by Liu Yandong, a Communist Party official, who served as chairwoman of the institute and was the head of the United Front Work Department when the program began. She is currently a member of the political bureau of the Communist Party of China Central Committee, vice-premier of the State Council, and a member of the Leading Party Members’ Group of the State Council.

“People need to remember, number one, it’s the highest level of the Chinese Communist Party that operates and oversees the Confucius Institutes,” Tethong said. “That makes them intensely political.”

Now, SFT and Tibet Action are working in conjunction to spread awareness of the institute’s presence. On March 21, UMass Amherst SFT held a screening of “In the Name of Confucius” directed by Doris Liu. The documentary follows the Toronto District School Board, Canada’s largest school board, and the backlash it received over its plan to open the world’s largest Confucius Institute.

Tethong attended the event, noting that it was held both to educate students and send a message to the University.

“Right now, we’re kind of at a crucial time at the point in our campaign,” said Dolma Tsering, a sophomore psychology major and member of the executive board and event coordinator at UMass Amherst Students for a Free Tibet.

“We’re really pushing right now to get this awareness to be spread,” she said.

Editor’s Note: Since publishing this article, another paragraph was added to include Lhadon Tethong’s statement that the faculty review committee was not a standard university process.