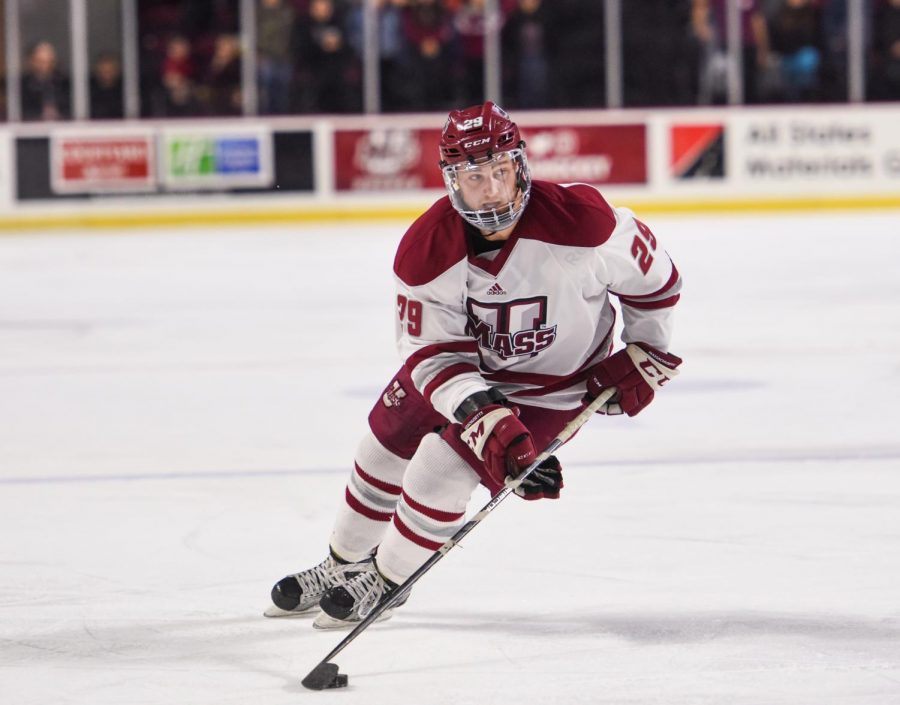 The quarterfinal round of the Hockey East Tournament is uncharted territory for the Massachusetts hockey team but then again, with 12 more wins than last season, who’s to say the Minutemen can’t relish as the underdog?

It’s safe to say that most preseason predictions for the young UMass squad were off base.

The term implied their hopes of establishing a new identity in Hockey East this season with their league-leading 14 new roster additions.

“But the question remains how ‘new’ this UMass team can be. With so many fresh faces, chemistry could be hard to find and freshmen historically are inconsistent,” Mike McMahon wrote for CHN. “The talent is there for UMass to have the biggest turnaround in the country from last season to this one, but it remains to be seen whether or not this group can come together with so many new faces.”

UMass coach Greg Carvel has used one word almost every single press conference this season in reference to his team’s play: consistent.

Carvel constantly talks of how he’s rarely worried about what he’ll see out of UMass each night, confidently expecting 100 percent focus from each skater and undeniable effort.

“That’s what you expect, you expect inconsistency,” Carvel said. “These kids are in a great spot, they’ve paid the price all year, they’ve grown and they’ve come together as a group. They’ve leaned on each other and they’ve had different guys step up.

“That’s the beauty of that big group with a lot of good players, different guys have taken the reigns and led the way,” added Carvel. “We’re pretty consistent, they’ve all been awesome.”

United States College Hockey Online wrote only of Cale Makar and Mario Ferraro in the “Names to know” section of the Hockey East 2017-18 season preview (briefly mentioning Austin Plevy), alluding to the history made by the two highest draft picks the program has ever seen.

“It’s difficult to believe that they alone can be saviors of the Minuteman team that a season ago was a minus-1.64 goals a game team,” Jim Connelly wrote for USCHO.

For a combined 42 points (nine goals and 33 assists), they certainly did help.

“They’re the two biggest factors, I think Johnny Leonard is right there along with them,” Carvel said. “Particularly Cale and Mario we really rode them hard the first two-thirds of the year, those two kids have been a huge difference maker in the program.”

Carvel could not acknowledge Makar and Ferraro without sending credit to freshmen Mitchell Chaffee, Oliver Chau, Jake Gaudet, and Philip Lagunov as well.

“If UMass doubles its win total from last season, the Minutemen would still only be a 10-win team,” The Mack Report wrote in early October. “While huge improvement is expected, Carvel and his staff had to strip the program down to bare bones last season, and the rebuild will get there, but it’s going to take more than one year.”

USCHO predicted the Minutemen to finish in 10th / 11th place.

The Boston Globe and The Mack Report both had UMass finishing 10th.

Earning points in five of their last six regular season contests, including a 3-3 tie with fourth-place Boston University and a 1-0 shutout over third-place Providence, the Minutemen slid into eighth place and secured home ice.

“We’re decidedly the underdog,” Carvel said. “At the same time there are no easy wins.”

Northeastern returns to the quarterfinals again having reached the second round in back-to-back seasons (2015-16 – 2016-17), including getting crowned as Hockey East champions in 2015-16. This is also the fifth consecutive season Northeastern has had a .500 record or better with a staggering .691.

As the No. 2 seed with an impressive 21-8-5 record and the 2017-18 Beanpot championship trophy in their pocket, the Huskies will be the favorites heading into the weekend.

“We were able to beat them once this year so I’m sure they’ll be ready for us and they won’t take us too lightly,” Carvel said. “They’re a very confident team right now, they’ve won a lot of games in the second half of the season and they’ve got a full lineup. We’ve got to make it real difficult on their best players. That’s our goal.”

Carvel understands the Minutemen’s position heading to Boston this weekend and has complete faith in UMass’ ability to outplay the Huskies.

“I don’t think we go in there and say let’s see what we can do, hope for a miracle, that’s not the case,” Carvel said. “We feel if we go in there and play hard with a good game plan and really try to neutralize their better players we have a good chance, if we win this series it’s not like it’s going to shock the world, but maybe it will.