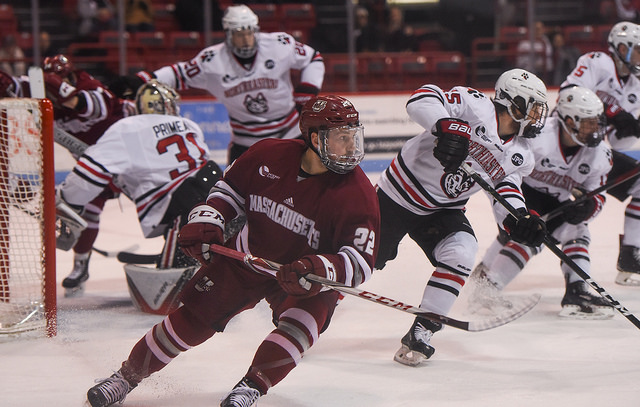 BOSTON—Tied 2-2 with Northeastern late in the third period on Friday, the Massachusetts hockey team had a chance to steal a win, but a turnover at the end of a power play sunk UMass’ hopes of an upset.

The No. 7 Huskies’ aggressive forecheck paid off, as Adam Gaudette picked up the puck and found Dylan Sikura wide open for a one-timer in the high slot—the senior buried it, and second-seeded Northeastern escaped with a 3-2 win in Game 1 of the Hockey East quarterfinals.

Goals from Austin Albrecht and Brett Boeing weren’t enough for the eighth-seeded Minutemen, who were killed on the power play in Friday’s loss.

“Real good hockey game, very proud of my team, played the way we wanted to,” Carvel said. “Obviously, like everybody told me, don’t take penalties, and that was obviously a focus of ours. Specifically, don’t hit guys in the numbers, and we hit a guy in the numbers and take a five-minute penalty, and that’s the difference in the game.”

After an even first period ended scoreless, UMass center Jake Gaudet was hit with a five-minute major and a game misconduct for boarding, leaving a big hole in the Minutemen’s top forward line. It also set up an opportunity for the nation’s fourth-ranked power play to go to work, and go to work they did; the Huskies scored twice on the man-advantage, going up 2-0 in a flash.

UMass shot back right away, as Albrecht ripped a shot that beat Huskies goaltender Cayden Primeau short side just seconds after the power play expired, an immediate response for the Minutemen to cut the deficit to one heading into the third.

“To get one right after (the power play) is huge,” said Boeing. “Last series against Vermont we were down in the first two games of the series and we found a way to come back, we’ve been in this situation before and we know how to handle it.”

It didn’t take long for UMass to knot things up at 2-2 in the third, as freshman Mario Ferraro carried the puck around the net and found Boeing in the slot, who pushed it five-hole past Primeau to tie the game.

The Minutemen were dominant after their second goal, but their third-period push couldn’t produce a winner. They went to the power play with just over eight minutes to play but spent the first 90 seconds trying to gain the zone, never establishing themselves or testing the goaltender.

With the penalty expired, Northeastern junior Patrick Schule came out of the box and bumped Minuteman Philip Lagunov off the puck at the blue line. Schule left it for Gaudette to feed Sikura open in the slot, who fired it five-hole past Ryan Wischow.

“In a game like that you just got to find a way to make a save on it,” Wischow said. “Their goalie made one more save than I did tonight.”

Wischow got a piece of it with his pad on the way through, but the puck slowly slid inside the right post to give Northeastern a 1-0 series lead.

“Awesome job by my team coming back,” Carvel said. “Unfortunate how they scored their third goal, we were on the power play and had some good bids to take the lead, but I love my team. I love how hard we play, I love that Brett Boeing stepped up, it was a fun hockey game to watch. I’m sure the fans got their money’s worth tonight, that’s good playoff hockey and I’m excited for tomorrow.”

The game spent most of the game in overdrive, a frantically paced affair through the second and third periods in the snug confines of Matthews Arena.

“Even before the penalty we knew it was going to be a high-paced game,” Boeing said. “Going from the Mullins, obviously here it’s a smaller rink and you don’t have as much time and space to make plays. After the penalty we knew what we had to do to come back from it and getting a goal right after gained some momentum and (we) carried it into the third. Unfortunately that third one went in, but we’ll be ready for tomorrow.”

The Minutemen now sit on the brink of elimination, needing to win both Saturday and Sunday to take the best-of-three series.

“We just reset for tomorrow,” said Wischow. “I don’t know, you just take the positives from it, you just look forward to tomorrow.

“Our backs are against the wall, so let’s see what we can do.”

Puck drop on Saturday is set for 7 p.m.