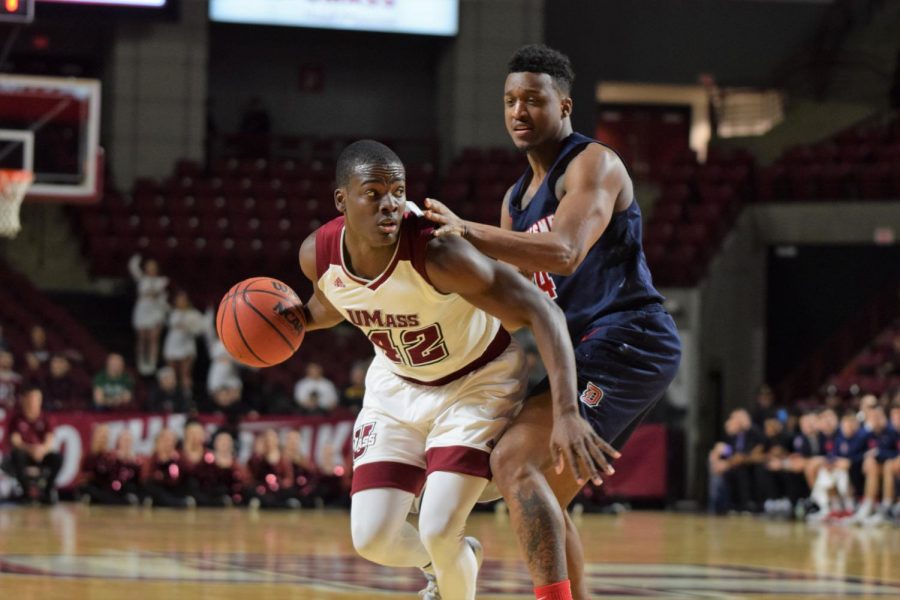 Staring down the prospect of a seven-game losing streak heading into the Atlantic 10 Tournament, the Massachusetts men’s basketball team pieced together a fine team win against Duquesne in Saturday’s season finale.

Five different Minutemen finished with double-figure point totals, as UMass (12-19, 5-13 A-10) took home an 85-75 victory to lock up the 13th seed in next week’s conference tournament.

Junior Malik Hines and walk-on Rayshawn Miller both notched career-highs in points, as Hines went a perfect 8-of-8 from the field for 20 points, while Miller was 3-of-4 from 3-point range to finish with 16 points.

Senior C.J. Anderson, in his final game at the Mullins Center, had a double-double with 12 points and a career-high 12 assists, taking on the facilitator role with sophomore Luwane Pipkins still easing back into the offense.

“It was everybody,” said UMass coach Matt McCall. “C.J. goes for a double-double, but Malik had by far his best game, and Ray Miller, that’s got to be a career high for him as well. We got balanced scoring across the board. I don’t know how many times we’ve scored 85 points or more, but I would say that’s one of our best offensive performances of the year.”

A back-and-forth first half finished with the teams knotted up at 33-33, after Miller’s buzzer-beating 3-pointer was overturned to a two-point basket. UMass came out of the break firing, and a 14-4 run put the Minutemen up 58-47 with 12:13 to play in the second half.

The Dukes (16-15, 7-11 A-10) came back with a run of their own, scoring 11 straight to tie things right back up. Pipkins came alive to stop the bleeding, dropping in three floaters on four possessions—interrupted by a Carl Pierre 3-pointer—on a 9-2 UMass run.

“When they tied the game, we were settling for jump shots,” McCall said. “And then we started putting pressure on the paint, and we got four layups and Carl made three. That’s how we got to play. When we get a lead, and we come down and miss a three, the next time down we got to get a piece of the paint, we can’t just crank a three.”

Duquesne pumped in seven straight points to get as close as 68-67, but one final run, sparked by four Anderson assists in the space of two minutes and punctuated by a monster and-one dunk from Hines, allowed the Minutemen to pull away at home.

Hines was unstoppable down the stretch, finishing with 18 points in the second half. It seemed that every time the Dukes tried to attack the ball-handler on pick and rolls, Hines was slipping screens and flying to the rim for another dunk.

“But it was someone different that kept hitting him. It was Pip, it was C.J., Ray Miller threw an unbelievable pass, all those guys contributed during that stretch there.”

The win is UMass’ first since Feb. 3, snapping a six-game losing streak and getting a bit of confidence back heading into the postseason.

“There’s been a lot that’s transpired this year. Some good, some bad,” McCall said. “A lot of adversity. Everything that’s transpired up to this time, can we check it all at the door, and completely get ourselves into the team, and we did that tonight.”

With the A-10 Tournament beginning on Wednesday, Anderson is concerned with only one thing.

“Winning,” Anderson said. “That’s really all that’s on my mind. After tonight, I’m focused, we’re focused, there’s no more smiling, no more playing around; it’s time to get to business, for real.”

The Minutemen are the 13-seed in the tournament, and will take on 12th-seeded La Salle at 6 p.m. on Wednesday.

This year’s A-10 Tournament will be held at Capital One Arena in Washington, D.C.