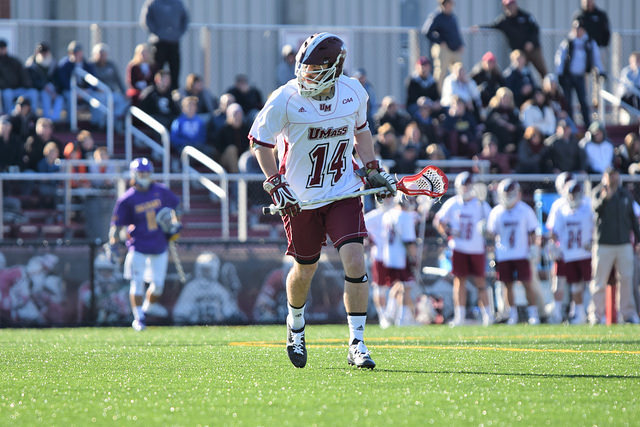 It hasn’t been the start to the season Massachusetts men’s lacrosse coach Greg Cannella envisioned.

The Minutemen opened with a grueling non-conference schedule, taking on No. 16 Army, Harvard, No. 11 Yale and No. 1 Albany, falling in each game. UMass was prone to getting out to slow starts and digging itself into an early hole that it was unable to overcome.

On Saturday against New Jersey Institute of Technology, it was the Minutemen who reversed the script and built an early lead, dominating the game from start to finish en route to a (17-3) blowout victory.

“We’re fortunate to get out to an early lead,” Cannella said. “That’s happened to us three times this year where we couldn’t recover from it so it was nice to be on the other side of that.”

Noah Rak won the opening faceoff for the Minutemen, drove down and dished it to Connolly. Connolly found Carr open in front of the goal, and he found the back of the net just six second into the game. The opening goal would set the tone, as UMass would outscore NJIT 4-0 in the first 15 minutes.

The fast start was relieving for the Minutemen, as they had been outscored 17-4 in the opening quarter of the last three games.

UMass would score the opening two goals of the second quarter before Aaron Forster was able to put the Highlanders (0-8) on the board.

From there, the Minutemen took over the game, scoring the next eight goals between the second and third quarter to officially put the game out of reach.

“We took the opportunity to be at home, NJIT is a good team, but the boys were fed up with what was going on,” Paparo said. “Now was our chance to take a step forward in the right direction and move on from what’s been going on the last three losses.”

Though NJIT has not won a game this year, Cannella’s group remained focused and locked in, not allowing the Highlanders to have hope of making a comeback.

“NJIT has done a really good job against some teams,” Cannella said. “They’ve been in every game, the second half of some games against Delaware and we watched them play the other night against Princeton and they put up some goals. It’s good to be able to hold them down and play solid defense but then score on the other side as well.”

UMass would outscore NJIT 3-2 in the fourth quarter, having the opportunity to clear out its bench and play guys who haven’t seen much action this season.

Cannella views this as a great opportunity for the young guys, and hopes it will give them confidence moving forward.

“It’s important for you as a team to get those guys in and hopefully they come back to practice tomorrow and practice hard,” Cannella said. “They’ve been doing that since day one. It’s not an easy thing for young guys, especially coming from places where they’ve played every minute of every game for four years, now they don’t play at all. It’s always good to get them in the game.”

The Minutemen are back in action Wednesday, taking on UMass Lowell.