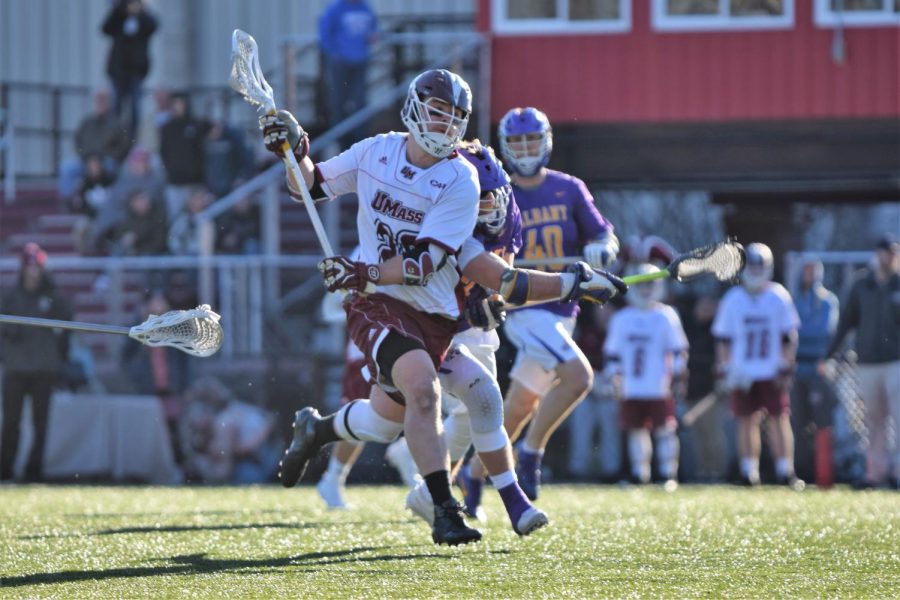 “Our guys were ready to play initially,” UMass coach Greg Cannella said. “Anytime you can go up 4-1, then they climb back 4-3 and then we score some quick ones at the end of the half. Anytime you can do that it helps with confidence and it also helps you play more relaxed.”

After the River Hawks scored the opening goal of the second half, UMass seniors Jake Lisauskas and Buddy Carr answered with scores of their own to keep the Minutemen out in front with a comfortable lead.

Austin Lane and Jon Phillips scored the next two goals for Lowell, both assisted by Sean Tyrrell, to bring the River Hawks within three, but UMass would close out the game by scoring four straight to give them the win.

“Our offense has been fairly good,” Cannella said. “We were averaging about 10.5 goals per game before this one. We played well. We’re not the best finishing team, we take a lot of shots on goal but we don’t finish a lot of them.”

The Minutemen were able to get out and run on Lowell, scoring multiple goals before the River Hawks had a chance to set up their defense.

“Today it was a lot of transition goals,” Cannella said. “I think we had four or five transition goals so that’s really the name of the game for any team that wants to be successful. There’s a lot of defenses out there that are very strong when you play six-on-six. If you can get some in unsettled situations, you can push your goal total up to 12-13 like we did today.”

The Minutemen were able to dominate possession of the game thanks to faceoff man Noah Rak, who went 19-21 in the circle, grabbing 15 ground balls.

“For Noah, he expects that out of himself,” Cannella said. “We expect that out of him as well. It’s about being consistent and going from game to game. Two good ones in a row and hopefully he can have another good one on Saturday.”

Rak wouldn’t take all the credit, as he says his wings had a big part in his success in the faceoff circle. His .905 percent success was a career high.

The Minutemen return to Garber Field Saturday to take on Hartford.