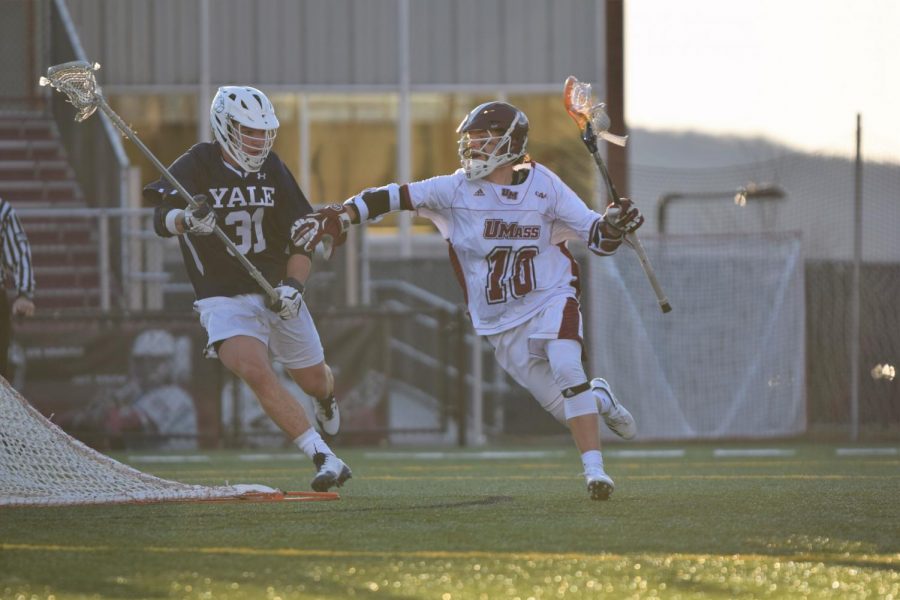 While students were off enjoying spring break, Massachusetts athletics continued to roll.

Here’s what you missed while gallivanting in Cancun, Europe, Chicago or wherever you were the past week:

Breneman calls it a career

Many people expected Adam Breneman’s name to be called in the 2018 NFL Draft, which takes place from April 26-28.

However, the former Minuteman tight end announced his retirement from football on Tuesday via a blog post.

In the post, Breneman sites an injury to his left knee that he suffered while playing at Penn State as the main reason behind his decision to retire.

In two seasons with the Minutemen, Breneman compiled 1,572 receiving yards and caught 12 touchdowns.

After a 1-4 start to the season, UMass men’s lacrosse has gone on a three-game winning streak to run their record up to 4-4.

After losing to nationally ranked Yale and Albany in back-to-back games, the Minutemen have had a slate of opponents this past week.

The Minutemen’s most recent win came over Hartford on Saturday, a 17-13 victory that featured a six-goal game from Chris Connolly and five goals from Buddy Carr.

Prior to its midweek win over UMass Lowell on March 14, UMass broke its losing streak with a 17-3 blowout win over New Jersey Institute of Technology on March 10.

UMass has one more game against Brown on March 24 before its conference games begin.

Having not played in Amherst since their season opener vs. Dartmouth on Feb. 17, the Minutewomen played their final two non-conference games away from Garber Field last week.

UMass battled No. 23 Cornell Saturday through two overtimes before falling 11-10 to the Big Red. Hannah Burnett contributed three goals and an assist to the Minutewomen’s effort, but a second overtime goal from Cornell’s Ida Farinholt decided the game in the end.

Four goals from Hannah Burnett and three goals from Kaitlyn Cerasi helped lead UMass to the 14-13 win over Ohio State, its fourth of the season. Burnett’s fourth goal came with 17 seconds left in overtime and sealed the game in favor of UMass.

Hockey gets swept by Northeastern

It’s been a while since the Mullins Center rocked like it did during UMass hockey’s first round playoff series against Vermont.

After three thrilling games against the Catamounts, the Minutemen advanced to play Northeastern in the second round of the Hockey East Tournament.

The 23-9-5 Huskies brought UMass back down to earth with a two-game sweep. Northeastern outscored UMass 10-4 over the course of the two games — the clincher was a 7-2 victory for the Huskies.

The conclusion of the season stirred speculation as to whether or not standout freshmen Cale Makar and Mario Ferraro would stay for their sophomore years. UMass coach Greg Carvel believes they will.

“Both are extremely important players. I think they both learned a lot this year,” Carvel told the Massachusetts Daily Collegian last week. “The sense that I got after Saturday’s game was that we still have a lot of work to do and both want to be a part of it.”