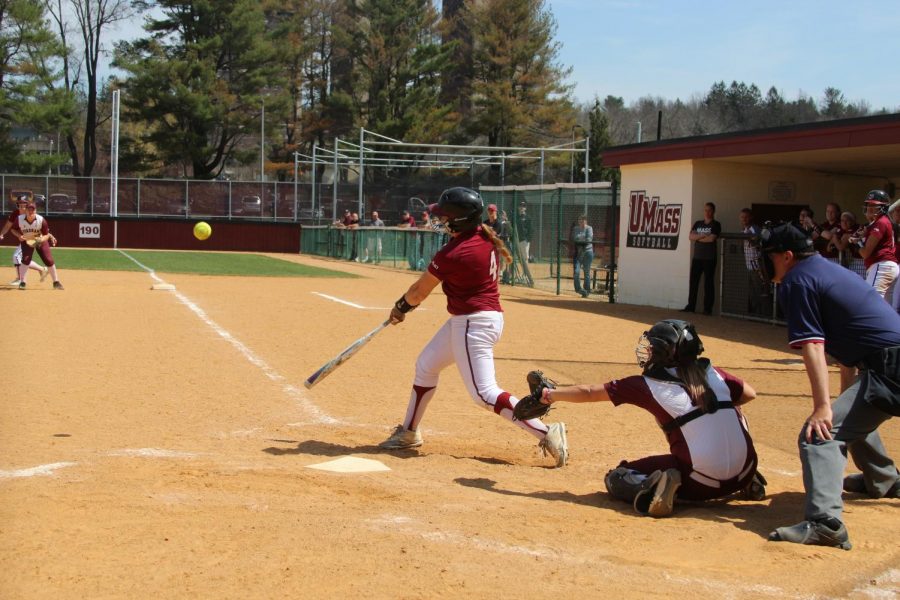 On a chilly Sunday afternoon, the Massachusetts softball team welcomed La Salle back to the site where the Explorers gave up 18 runs the previous day over two games.

The offense explosion began with a three-run home run over the right field fence from left fielder Kaycee Carbone, who couldn’t help but credit her teammates.

“It was big because my teammates got on [base] before me so it was three runs instead of a solo-shot,” said the power-hitting junior. “It was up for my teammates to set it up, and to bring them all in with one swing was pretty cool.”

Later in the third inning, freshman Jackie Kelley lined a shot to center field for a single, plating two in the process to extend the lead to six.

Though Kelley bats from the nine spot and only has a batting average of .196, her contributions have become timely and haven’t gone unnoticed.

“When the bottom of the lineup contributes, it takes all of the pressure off,” said Carbone, who hits third. “They’re doing a great job at picking it up especially from the beginning of the year.

“They’re scoring a lot of runs and it makes it easier for us to have nice and relaxed at-bats and do our thing, so it’s awesome.”

Coach Kristi Stefanoni has also been incredibly impressed by how well the offense produces as a whole.

“There’s people all over the lineup who are contributing,” said an ecstatic Stefanoni. “It’s a really good thing to see. It helps because it doesn’t put too much pressure on one particular part of the lineup. They know when the bottom of the lineup comes up, they’ll be able to take care of it.”

With 26 runs in their first three games of conference play, the Minutewomen are high-powered to say the least.

To put things in perspective, in 2017, every game between La Salle and UMass was decided by one run. In this weekend’s three-game series, the closest margin of victory was seven runs in the first game when UMass won 7-0.

The Minutewomen followed that one with an 11-3 thumping in game two of the doubleheader before Sunday’s 8-0 blowout.

There’s a clear reason to be excited about the Minutewomen’s offense, and Carbone expressed that after Sunday’s big win.

“I’m super confident in this offense,” said the Hudson, New Hampshire native. “I feel awesome. It’s nice to have the entire lineup hitting so there isn’t pressure on one single player. It’s a big change from last year.”

After the game, Stefanoni got a bouquet of flowers from the team as well as a framed picture. She also got a surprise PowerAde bath with her back turned to the dugout in right field.

It may not have been ideal for windy, 35 degree weather, but the bath represented a lot for Stefanoni who has dedicated her professional softball life to UMass.

The praise from her girls on the field was even higher.

“To put it simply, she’s like our mom away from home,” Carbone said. “She’s a role model for us — she works hard. She’s super positive; she’s firm when she needs to be firm. She’s just a great person and great person to look up to.

“She means the world to the entire team.”

Stefanoni took the reins of UMass softball in June 2014 after serving as interim head coach the previous season, as a result of the passing of legendary coach Elaine Sortino.

Prior to her impressive career as head coach of the Minutewomen, Stefanoni spent seven years on the UMass coaching staff, going from director of operations to assistant coach and to associate head coach in 2013.

She graduated from UMass in 2006 after having a standout playing career for the UMass softball team under her mentor, Sortino.

Stefanoni will look to add three more wins to her resume when the Minutewomen travel to the nation’s capital to play A-10 rival George Washington this weekend.