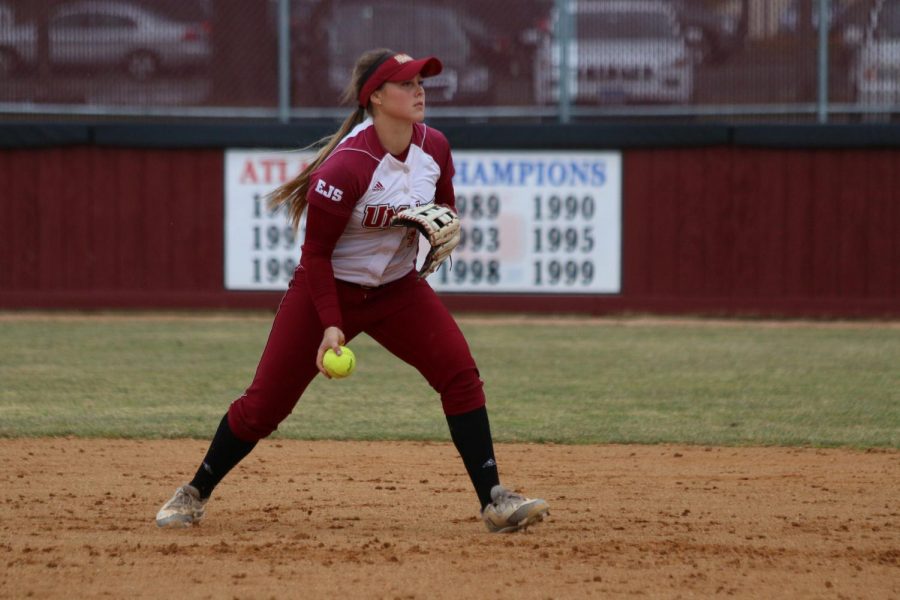 The Massachusetts softball team continues to see its record get better and better because of the improvements in its play on the field.

Participating in the Diamond 9 Citrus Classic at the ESPN Wide World of Sports Complex in Kissimmee, Florida, the Minutewomen went 3-2 on the weekend. UMass beat UC Santa Barbara 7-3 on Sunday and won 4-0 over the Czech national team in an exhibition matchup. The Minutewomen fell to FIU 4-0 on Saturday, and split their games on Friday, the first of which was an 11-9 loss at the hands of Notre Dame followed by a 9-5 win over Delaware.

“I think there were a lot of really good positives,” said UMass coach Kristi Stefanoni. “I think this team is figuring out who they are. They’re having fun together; obviously it’s fun to win.”

UMass began its weekend with a rough start against Notre Dame, giving up seven unanswered runs in the first three innings, chasing pitcher Kiara Oliver off the mound in exchange for Quinn Breidenbach, who went the rest of the distance.

In the bottom of the third, after an erratic pitch from the Irish pitcher Cait Brooks led to a run scored, Kaycee Carbone smashed a grand slam to centerfield to help lead the comeback for the Minutewomen, cutting the Irish lead to 7-5.

After a scoreless fourth inning for Breidenbach, the Minutewomen tied the game on two bases-loaded walks.

In the bottom of the sixth, after Notre Dame had scored a run to make it 8-7 on an error, Carbone hit a two-run home run, her second of the day, to give UMass the lead.

The Minutewomen would surrender three runs in the seventh to fall 11-9.

“We’re not a team that can come back from something like that,” Stefanoni said. “For our team to be able to come back offensively from 7-0 against a team like Notre Dame is huge. I don’t know if our team understood the magnitude of it. If it does anything, I think it does great things for our confidence that we’re able to do something like that against a team like Notre Dame.”

Later in the afternoon, UMass would avenge a tough loss to Notre Dame by scoring nine runs again against Delaware. But this time, there was a different result.

The Minutewomen offense was powered by Jena Cozza’s two home runs—her solo bomb in the fifth inning cut the Blue Hen lead to 3-2 and another solo shot in the seventh extended UMass’ lead to 5-3.

“Jena’s been really key for us all weekend,” Stefanoni said. “She puts a lot of pressure on herself but to help that, the players behind her in the lineup have picked up as well.”

After scoring a combined 18 runs in the first two games of the weekend, UMass would open Saturday by getting shut out at the hands of FIU 4-0. A one-run double in the fifth inning and two home runs, a two-run and solo shot, did UMass in for the loss.

Breidenbach was in for the first six innings of the game, allowing seven hits on three earned runs. Oliver came in for the final inning, giving up one earned on one hit, which was a solo home run.

Later in the day, the Minutewomen would follow up the 4-0 loss to FIU with a 4-0 win over the Czech national team. It was played as an exhibition game so it doesn’t count toward UMass’ record.

“Even though the game against the Czech Republic didn’t count because it was an exhibition, Meg Colleran did a phenomenal job,” Stefanoni said of her senior star pitcher. “She shut them down offensively and it was phenomenal.”

To end their time in Florida, the Minutewomen would be led by Oliver’s complete game pitching performance with a 7-3 win over UC Santa Barbara.

With the score knotted up at threes heading into the sixth inning, Cozza hit a solo home run, her third of the weekend, to make it 4-3. UMass would tack on three more in the seventh, to make it 7-3, and they’d win by that score.

Overall, Stefanoni was almost all optimism from the weekend.

“I can’t really explain it,” Stefanoni said. “There’s just something different about this group of people. They trust each other. I think they’re beginning to believe in their process of how they’re going to get to an Atlantic 10 tournament and win a championship and it’s fun to see.”

The Minutewomen will continue their season with a five-game tournament in Louisville, Kentucky next weekend. That will include games against Eastern Michigan, Louisville and Bradley.