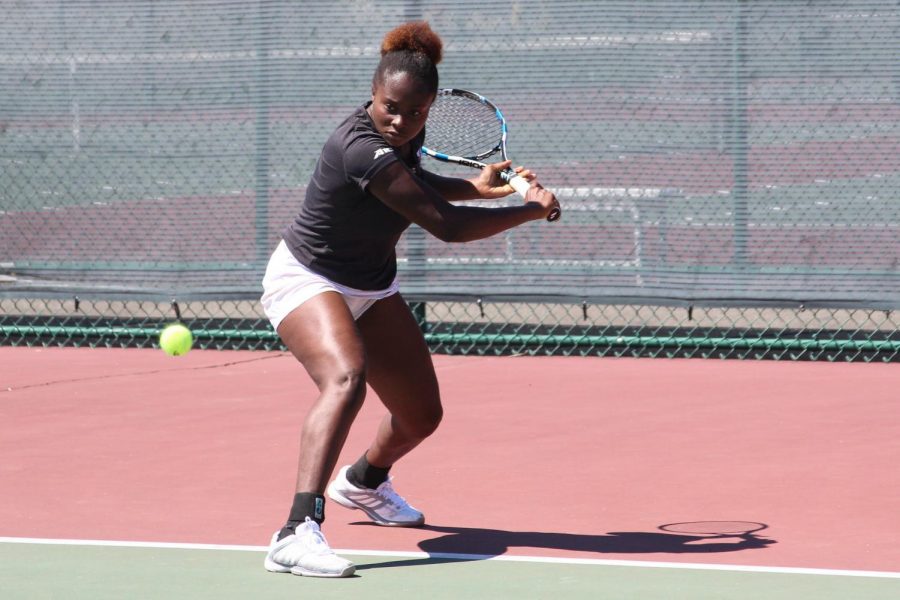 The Massachusetts tennis team had anything but a relaxing spring break, spending its week off in North Carolina competing against Elon, Charlotte and Davidson.

The Minutewomen won the first two matches but lost the third to go 2-1 on the road trip. They defeated Charlotte on Tuesday and Elon on Wednesday, but fell to Atlantic 10 opponent Davidson on Friday.

Last week’s contests saw the Minutewomen taking their game outdoors for the first time all year. This adjustment, which always presents a challenge, was made especially difficult with last Monday’s rainy weather forcing UMass’ first outdoor practice to be moved back indoors.

“We weren’t able to practice before the match against Charlotte,” coach Juancarlos Nunez said. “That presented an extra challenge for us as we have been playing indoor tennis since November. You cannot be as aggressive as often playing outside. There are many factors that players have to deal with like the sun, temperature and wind.”

The lack of outdoor practice did not seem to faze UMass, as it was able to secure a hard-fought 4-3 victory over the 49ers. Ruth Crawford won an epic battle at the number one position over Tai Martin, which saw her lose the first set only for her to rally to win the second before taking the third 7-6 (3) in a tie-breaker for the match victory.

The Minutewomen remained outside on Wednesday, following up their win on Tuesday with a victory against Elon. This win was secured in a more comfortable fashion than the triumph over Charlotte.

Senior Laura Moreno took home the number four singles contest, besting the Phoenix’s Maria Paraja 6-7 (3), 6-4, 6-3 to seal the win.  The Minutewomen won the match 4-1 for their seventh head-to-head victory on the season.

The final match of the road trip was UMass’ second in conference this year. The Minutewomen fell 5-2 to Davidson, which improved its record to 12-2 and a perfect 3-0 in A-10 play. Nunez and UMass know the Wildcats will be tough to beat come conference tournament time.

“They were able to make a few more shots than we were in the key moments, and that was the difference in the match,” Nunez said. “But we were there. We just needed a couple more shots to go our way. Hopefully we’ll get a crack at them in about a month’s time.”

Ana Yrazusta and Janja Kovacevic earned wins at the number two and number three singles positions while Kovacevic won alongside her partner Martina Bocchi in doubles.

Kovacevic was a force for UMass, as she won all three singles competitions she entered as well as two doubles for a three-match record of 5-1.

“She’s been a solid player for us at that number three position,” said Nunez. “Having a player that you can count on for every single match is something that is very valuable.”

The tennis team is back in action this Saturday, taking on Yale in New Haven, Connecticut. The Minutewomen will follow that up with a match against Quinnipiac next Thursday, before closing out the regular season with four A-10 contests.

Tim Sorota can be reached at [email protected]