UMass to host Vermont for first home playoff series since 2007 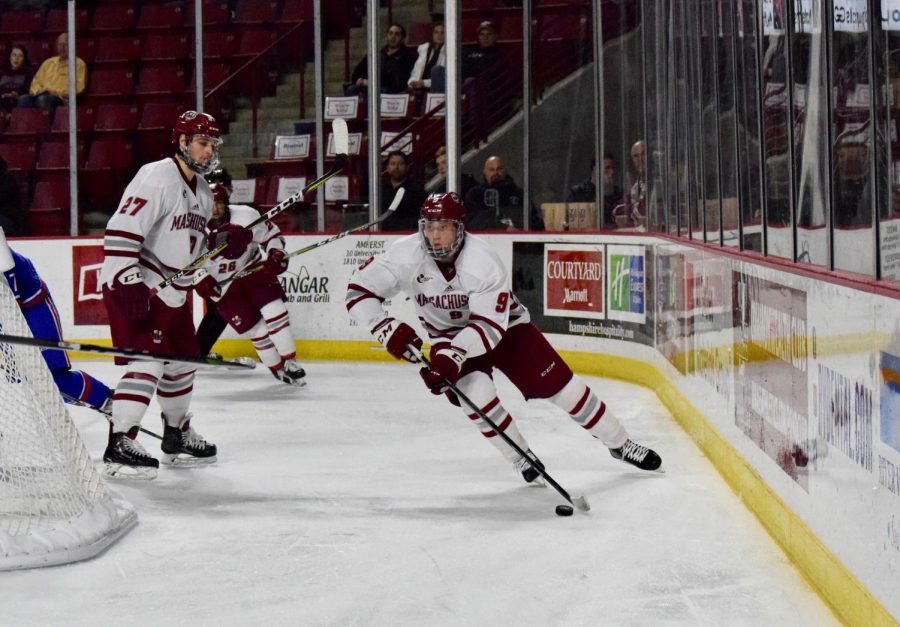 The Massachusetts hockey team opens the first round of the Hockey East Playoffs on home ice for the first time since the 2006-07 season this Thursday, welcoming Vermont for a best of three-game series.

“I think it was our goal to try and get home ice this year. I think that was in reach. It’s a nice step for us,” UMass coach Greg Carvel said. “I just hope that we can start a streak going the other way now, hosting for a number of years. It’s a big step for us, but now we have to do something with it.”

Earning points in five of the last six contests, the Minutemen hope to carry their end-of-the-season momentum into the playoffs.

Having defeated Connecticut 3-2 on Feb. 22, after the Huskies tied the game with 1:48 left in regulation, paired with a 1-0 shutout against No. 9 Providence, UMass has found its stride heading into postseason play.

In UMass’ 2016-17 playoff run, the last place Minutemen totaled one goal in both contests in the opening round and was easily knocked out by then fifth-placed Providence.

“I mean it’s huge, it’s definitely an awesome experience and huge opportunity for us,” defenseman Mario Ferraro said. “It’s crazy to see this program grow, and I’m very honored to be a part of something that’s going to be very special, and I think we can do a lot of damage in the playoffs. It’s really exciting.”

In a two-game series against the Catamounts in January, UMass earned a point from a 2-2 tie on Jan. 12 before winning 6-3 the following night. Carvel believes that both teams were entirely different at that point in time, and he expects a much more high-caliber performance from both rosters.

“We played well enough to take three out of four points,” Carvel said. “Vermont is playing much better—they’ve found confidence in their game, and we have as well.”

The Vermont series occurred just after UMass’ winter break session and freshman Cale Makar had just come back from the World Junior Championship tournament. Carvel believes these acted as factors in the matchup.

Heading into Thursday, Carvel hopes to prepare the Minutemen for a Vermont team with a very aggressive forecheck in the offensive zone.

Ferraro was pleased with how UMass matched up against the Catamounts in the first series, especially on the road.

“It’s a whole new series now,” Ferraro said. “It comes down to who competes harder in the playoffs and who wants it more. So we’re looking to get off to a good start on Thursday.”

With a team-high 17 assists, Ferraro has also notched three goals for 20 points and an additional 47 blocked shots. Mitchell Chaffee leads the team with 12 goals while also contributing nine assists for 21 points.

John Leonard hasn’t suited up over the last two games after an injury sustained against Boston College on Feb. 15. Carvel believes he’ll return to the lineup on Thursday night and he’ll have the opportunity to improve on his team leading 23 points. Oliver Chau follows with 22 points in eight goals and 14 assists.

Matt Murray has started the last six contests in goal for UMass, posting his fourth shutout of the season against the offensively gifted Friars, and Carvel says he’s likely to stick with the freshman. Murray has accumulated an 8-11-2 record with a 2.72 goals-against average and a .913 save percentage.

Thursday’s game is set to begin at 7 p.m.