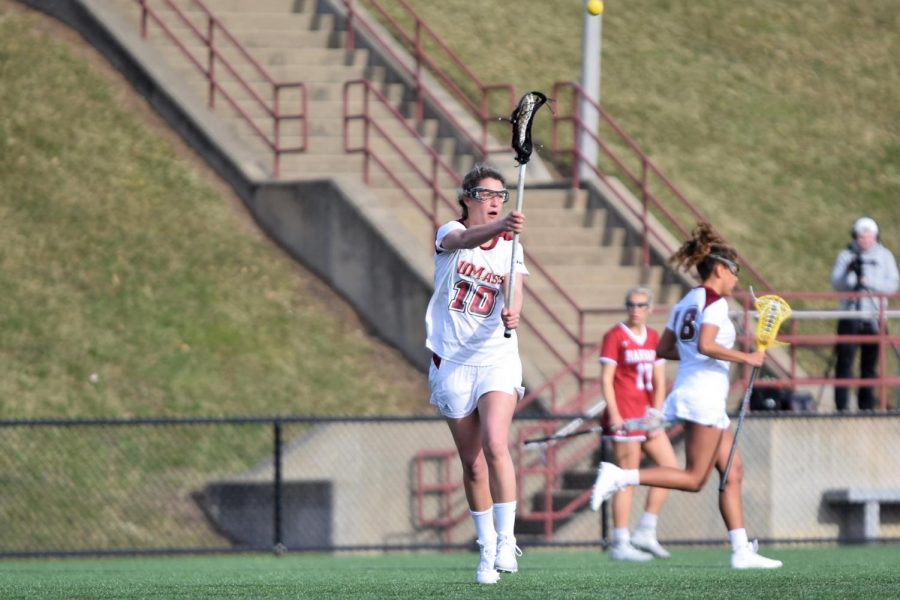 The Massachusetts Women’s Lacrosse team will start their Atlantic 10 conference play on the road this Thursday when they travel to take on Saint Joseph’s in Philadelphia.

As the team moves into conference play, the importance of meeting their expectations grows. UMass (5-3) has performed well in nonconference games, having won four of its last five games.

The Minutewomen have won the Atlantic 10 title nine years running, a feat nothing short of remarkable. UMass coach Angela McMahon has been head coach for eight years and brought her team to the NCAA Tournament each year.

She knows the dominance her program is capable of. In fact, she has not seen one of her teams lose to an Atlantic 10 opponent since 2010.

“Our players understand that [winning an A-10 Championship] is their team goal and they want to keep the legacy going,” McMahon said.

St. Joseph’s has a .500 record at home in 2018, which does not compare favorably with other conference teams. Despite a similar record, UMass leads the Hawks in virtually every statistical category. In anticipation for tougher conference rivals, there is pressure to dominate this first A-10 game; the Minutewomen understand that no game should be taken lightly.

Each team enters conference play on the same day, led by George Washington with a 7-1 record. GW’s offensive compares very evenly to their UMass counterpart, slightly out matching them in accuracy and possession. George Washington’s shots-on-goal per attempt is seven percent higher than UMass’, while they also turn the ball over much less.

There are two other teams ahead of UMass at this critical point in the season: George Mason (6-2) and Richmond (6-2). As Massachusetts players have mentioned before, they used the beginning of the season to build upon teamwork and gain experience against tough teams, as opposed to build upon a perfect record.

However, UMass is not the only team to have played nationally ranked teams. Richmond took on No. 4 James Madison and No. 10 Virginia earlier in the year. Even St. Joseph’s had to battle No. 9 Towson and No. 13 Navy.

“We feel good about our team and having as many different weapons as possible getting involved,” McMahon said on what sets her team apart. “That is going to be key moving toward the end of the season.”

Some expectations go beyond winning the Atlantic 10 championship, though. Under McMahon the Minutewomen have been eliminated from the NCAA Tournament in the first round four times, the second round twice and the quarterfinals once (2016). Coaches, players and alumni expect that it is only a matter of time before the program makes a serious run deep into the tournament.

“The pressure is already there without us talking about it,” McMahon added.

Talk about expected results have been limited among the team. The Minutewomen believe that they are at their best when they are loose on the field, as it aids the flow of teamwork and allows everyone to focus on their individual skills.

When the pressures of high expectations sometimes enters the minds of young players—or players with the most weight on their shoulders—focusing one game at a time is the most effective game plan.

“We can be our own worst enemies in terms of how hard we can be on ourselves,” McMahon said. “It is about keeping things light, everyone understanding what their role is and when we focus in on that as opposed to the other things, I think we can pretty much do anything we wanted to do.”

The Minutewomen will take on St. Joseph’s on the road this Thursday at noon.