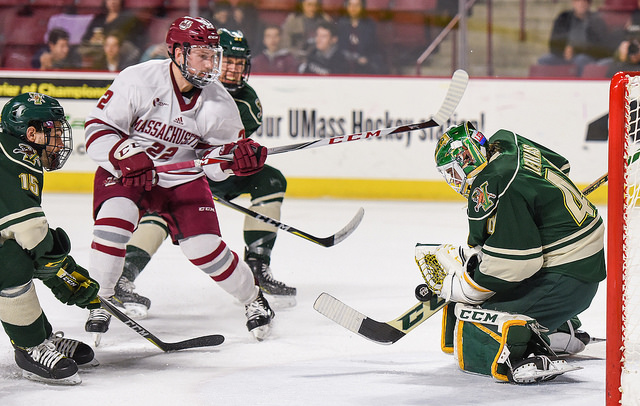 Thursday night the Massachusetts hockey team scored with 3.3 seconds left in overtime to take Game One of the opening round series with Vermont. Almost 24 hours later, it was the Catamounts that struck in extra time, winning Game Two, 4-3, with the game-winner coming 12 seconds into the period.

UMass (16-18-2) couldn’t maintain a 3-2 lead it gained at the onset of the third period when freshman Austin Albrecht scored 29 seconds after the drop of the puck.

Albrecht’s tally was the Minutemen’s third straight goal at that point in the game, following goals from Austin Plevy and Mitchell Chaffee in the second period.

With the loss, UMass’ season is now on the line and will be decided with a decisive Game Three, Sunday at 3 p.m.

“I thought our team showed a lot of heart and a lot of resilience, tonight obviously our backs were against the wall and none of our guys wanted to put away the sticks for the summer by any means,” Catamount coach Kevin Sneddon.

In overtime, UVM won the opening faceoff, entered the offensive zone and following Ross Colton’s shot from the high-slot, Thomas charged Minutemen goalie Matt Murray and buried the rebound, extending its season by another game.

Similar to Thursday’s game, UMass had a sluggish start, committing numerous turnovers and executing all around sloppy play in the defensive end.

The Minutemen eventually came back but the lack of consistency came back to bite UMass as the game-winner saw the Catamounts win each battle leading up to Thomas’ marker.

“I think we know that the last two games our first period wasn’t our best and we came ready to play in the second and third,” Plevy said. “We’re not sure why that is, it’s something we got to figure out as a team and be ready to go on Sunday.”

“That goal is just four guys not ready to compete,” Carvel said. “Take care of the checking, do what you’re supposed to do with the puck. All four guys on the ice. I’ll give Vermont credit. That was a great job to win the faceoff, they get it into the zone, we get on the wrong side of the back check — it’s just inexcusable. 12 seconds.”

The Minutemen’s comeback was just the second time all year they battled back from a two-goal deficit—Thursday night being the first instance—but UMass allowed UVM back in and are now faced with a winner-take-all Game Three.

“I thought tonight’s game was uncharacteristic for us,” Carvel added. “We played a team that was fighting for its life and I thought some of the goals they scored were much more of us playing poorly than them creating the offense.”