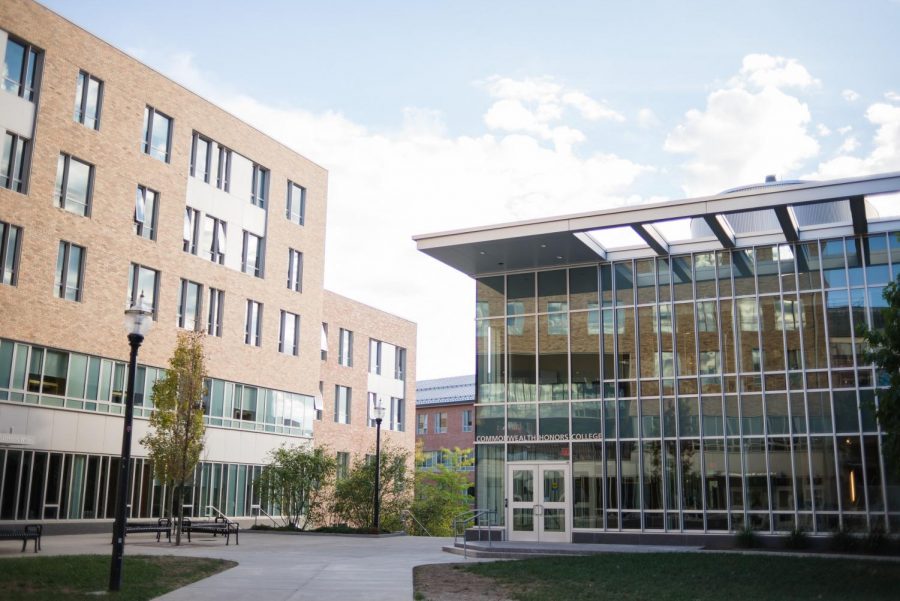 Roughly 80 students from the Bachelor’s Degree with Individual Concentration program attended a luncheon featuring a panel of BDIC alumni from the University of Massachusetts. The event was held in the Commonwealth Honors College Events Hall on April 15.

The BDIC program is an interdisciplinary academic program at UMass. According to their website, the students enrolled in the program are allowed to blend different disciplines and can choose between courses in the Five College Consortium.

The even began with Chris Fonte, senior and advisory board president for BDIC. Fonte opened the BDIC alumni networking event with a welcoming speech:

“This event is important; every year that I attend, I see relationships being built. So much positivity and knowledge comes together at this event. I think it’s one of the most important events that the advisory board offers.”

The event then shifted to a panel where the BDIC alumni introduced themselves, communicating their accomplishments in various jobs and entrepreneurial businesses. The alumni told successful stories and described how BDIC influenced some of their kaleidoscopic pathways.

Cessna referred to BDIC as an opportunity to explore different areas of interest to serve as a common goal of her interest.

“Knowing that I wanted to go to law school, I started taking courses to understand various law policies,” Cessna said. After graduating, she worked as a paralegal to practice law to gain experience for three years then went to law school. Cessna said that “it was very expensive and challenging.”

Cessna’s advice for students was that they should pursue law school if that is what they truly want. However, she also advised students to keep the high amount of competition within the field in mind.

Marc Gammell, co-founder and CEO of Treaty LLC — a local company that makes new products and technology with advanced biomaterials — graduated with a BDIC in sustainable enterprise and biotechnology in 2016. Gammell stated that he and his partners obtained a license from UMass for their first product invented, the “Dive Mask Defog” for scuba divers in 2016.

They have about nine distributors and over 400 scuba dive stores that carry their products. They also have an office and lab facility at the Pioneer Valley Life Science Institute on 3601 Main Street in Springfield, Massachusetts.

Gammell mentioned, “Our latest product is the ‘Mirror Anti-Fog’ — wipes for bathroom mirrors which will be starting to hit the mega stores soon like CVS and Target.” Gammell then handed out free samples of his new product.

Gammell’s advice for students was that “BDIC is one of the best paths for the entrepreneurs and the pioneers that want to create a new path that no one has gone down before.”

Sarah Hill, founder and CEO of Perfect Strangers of NYC — a roommate matchmaking service for those looking for an apartment or home — graduated with a BDIC in real estate and entrepreneurship in 2010.

During her time at UMass, Hill studied abroad in England. When she came back to the U.S., she noticed a challenge in finding affordable housing, so she started a blogging company on “How to Live in New York City Affordably.”

Hill’s advice for students was to “Just live life; go travel and when you meet people, think how you connect to life…and work on public speaking.”

Hannah Jacobson-Hardy, founder of Sweet Birch Herbals LLC, graduated with a BDIC in sustainability and environmental justice in 2010.  She started her company in 2014 in Williamsburg, Massachusetts, curing and healing muscle aches, arthritis, joint-pain and more.

Jacobson-Hardy’s advice for students was, “When there is a will, there’s a way. So, if you have a passion about anything, even if you got rejected at certain jobs or opportunities, there is some other doors that will open. Have fun in college and in life.”

Seth Mansur, director of Channel Partnerships and Energy, a sustainable energy company, graduated with a BDIC in sustainable development and experiential education in 2008. Mansur’s advice for students was that “The world we live in today isn’t a box. You’ve got to be creative, have a vision and follow through.”

Richard Nguyen, who graduated in 2017 with a BDIC in fashion merchandising, works as an executive assistant and casting associate for the Establishment Network. His job consists of looking for the “constant newest face for the season,” casting new clients’ fashion models daily and putting their portfolios into a computer database. Nguyen’s advice for students is “To have realistic career goals and strive to do what you want. If you fail, pick yourself up and do it again.”

Dave Noonan, who graduated in 1993 with a BDIC in a study of rhythm, sound, culture and anthropology has been the owner of David Noonan Painting for 15 years. Noonan works mostly on historical properties and he also owns “The Drum Mechanic” as a drum instructor. Noonan’s advice for students was: “You will get to where you want to get to, just keep working and keep your vision strong. Go after what you want, and ultimately you will be successful.”

Jed Winer graduated in 2013 with a BDIC in animal and environmental multimedia production and now works as a producer/editor on digital videos at National Geographic Partners in Washington D.C. Winer was always interested in animals and photography growing up. He took one fall semester off and interned for National Geographic and after graduation, he was hired by the same company in 2014. Winer’s advice for students “when looking for jobs is to spend more time networking with people.”

Remarks from Rachel Clogston, a senior BDIC marketing and social policy major, followed. Clogston has been a BDIC major since she was a freshman.

Clogston said, “The alumni networking event was enlightening and fun. It was really great to meet and hear what avenues people had followed and what different majors they had done.”

Clogston’s recommendation for future BDIC students is “Not to be afraid to explore your major. You are looking for different avenues to peak your interest. Trying new things — this is what BDIC is all about. And that’s how you can get down the path you want to be on.”

The event ended with a closing note from BDIC Assistant Director Linda Roney and a special thank you to everyone who was able to come out to the BDIC alumni networking event with sincere appreciation for the BDIC faculty and staff.

Lisa Ladas can be reached at [email protected]