Carr has 43 points this season 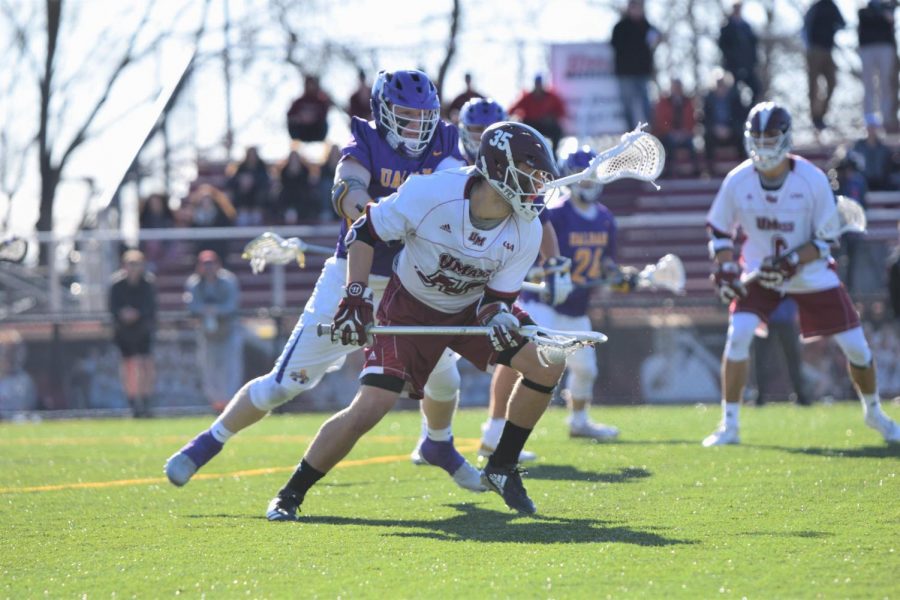 The Massachusetts men’s lacrosse team is on a six-game win streak and its offense is one of the main reasons why.

Behind a young attack group, the Minutemen (7-4, 2-0 Colonial Athletic Association) have the No. 15 ranked offense in the country, averaging 11.73 goals per game. The catalyst for UMass has been senior Buddy Carr, who has already nearly doubled his point total from the previous two years combined, with 43 points on 25 goals and 18 assists thus far this season.

Carr had spent the last two years playing primarily behind the net in the X position, but UMass coach Greg Cannella has moved him into playing more in front of the net, a position he is much more comfortable in. The results show for themselves as Carr has had three or more points in each of the games during the Minutemen win streak.

Cannella hasn’t been surprised with Carr’s strong play, knowing he’s been capable of this since he first arrived on campus.

“We expected that the last two years,” Cannella said. “You try not to force expectations onto anyone, but as a senior, he’s been able to play relaxed and go out and play confident, which is what you want every senior to go out and do.”

Carr is the lone senior in the attack unit, as he is joined by sophomores Jesse Leung and Devin Spencer and freshman Chris Connolly. Even without having played together much before this year, it is a group that has been able to click right from the start.

As a senior, Carr has taken it upon himself to be the leader of the group.

“I try to coach them up or help them with things they need,” Carr said. “If they have questions or if I think they should do something differently, I give them suggestions. We’re constantly talking about that stuff. I look at myself as a good leader for them, and they’ve embraced that and actually listened to me, which is nice.”

While the attack unit has been able to finish the ball, they have been helped out by the midfielders who have done a great job of pushing the pace and giving them extra opportunities to score goals. Midfielder Jeff Trainor has been a key to the transition game, as he is second on the team in both goals (19) and assists (13).

Another key to the strong attack has been Noah Rak’s ability to win faceoffs. Rak is currently ninth in the country in faceoff win percentage, taking .639 percent of the draws this season.

“We tend to click on all cylinders,” Carr said. “When we get rolling, we’re tough to stop. We’re all great players especially when we feed off each other. Whether it’s Jeff passing to an attackman or Connolly passing to one of the midfielders, we’re all on the same page.”

The Minutemen know that they will need to find the back of the net with consistency Saturday if they want to come away with a victory over Towson, a team that plays at a slower pace and limits the amount of possessions that you get offensively.