Sconone and Brannon bring out best of each other 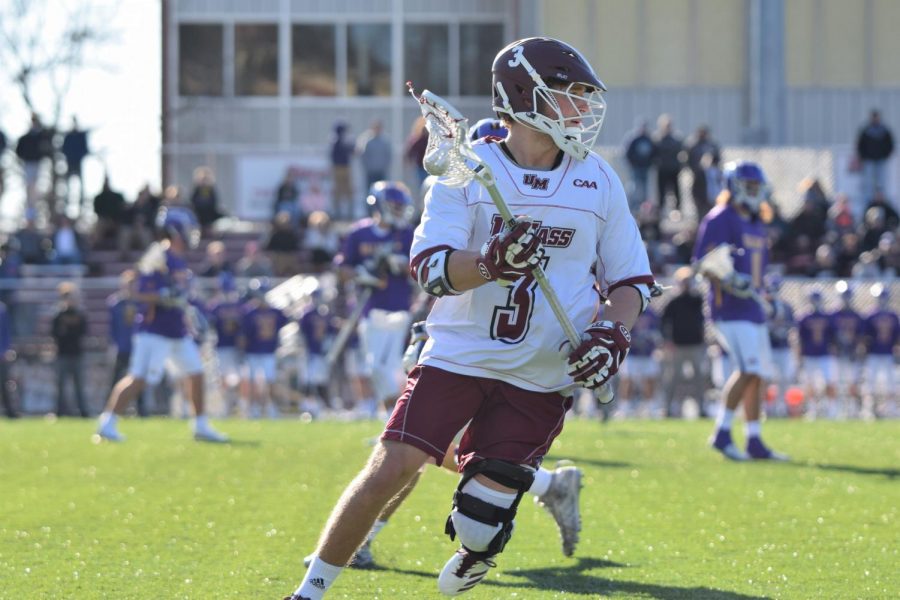 The Massachusetts men’s lacrosse team, on a seven-game winning streak, is just two regular season games away from its return to Colonial Athletic Association playoffs.

But before UMass (8-4, 3-0 CAA) can think about its chance to compete in the title game for the second straight year, it must first endure two tough tests against Fairfield and Hofstra.

On Saturday in Connecticut, for the first of the final two matchups, the Minutemen will take on the Stags (4-9, 1-2 CAA) in Fairfield, who are coming off a 16-14 loss to Drexel last weekend.

If UMass can leave Fairfield with its fourth conference win, it would guarantee the team a top-two spot in the postseason heading into the season finale vs. Hofstra.

In their recent stretch of dominance, which spans all the way back to March 6 when they last loss against Albany at home, the Minutemen have relied on a pair of top goaltenders, Hampton Brannon and Sean Sconone, to protect the cage in the defensive end.

“We have confidence in both [Brannon and Sconone] so that’s comforting,” UMass coach Greg Cannella said. “They’re supporting each other and working hard for each other as well.”

As a freshman coming into his first collegiate season, Brannon initially filled the secondary role behind Sconone. But, after three relief appearances and the Minutemen getting out to a dismal 1-3 start, Cannella decided it was time to make a change.

After UMass’ 13-10 loss to Yale, Cannella moved Brannon up and bumped Sconone down. In his first career start in net, the freshman allowed 13 goals on 34 shots and collected eight saves in a lopsided 19-8 defeat over the Great Danes.

After a less-than-great showing in his debut, Brannon made the most of his chance to bounce back from the loss. Just four days later against New Jersey Institute of Technology, the freshman allowed just one goal on 12 shots in the Minutemen’s second victory of the season.

Sparked by its first taste of legitimate success a whopping six games into its 14-game schedule, UMass followed Brannon’s lead and bounced back from its early-season woes by winning its next six games.

However, after letting up four goals on as many shots in his seventh consecutive start on the road at Delaware, Brannon was pulled by Cannella just 22 minutes in.

Under the lights and on the road, Sconone entered the game for his first action since relieving Brannon in the final 10 minutes of the game against NJIT.

Throughout the remaining 38 minutes, the junior stopped 12 shots and allowed just four goals, which — with the help of seven second-half tallies from the offense — allowed the Minutemen a chance to put together a fourth quarter comeback and pull out the late win.

A week later, as the Minutemen hosted in-conference rival Towson, Sconone got the starting nod for the first time since Feb. 27 and allowed four goals while making eight saves, highlighted by two big saves to open the game and a handful in the third quarter that allowed UMass to shut the door on the Tigers.

“I think [Sconone] is playing with a little bit more of a sense of urgency now,” Cannella said after Wednesday’s practice. “You hope that he appreciates the opportunity to be in the spot that he’s in right now and that he’s very focused on helping the team succeed.”

Although a team typically looks to a primary goaltender at this point of the season, the Minutemen are fortunate enough to boast a pair of equally deserving, experienced and reliable contenders, which Cannella said is useful in maintaining a sense of security in the defensive end.

“I think that any group, any defense, plays more relaxed if they feel confident in their goalkeeper,” he said. “As long as those guys continue to do what they do then that will happen.”