Fresh off breakout season, Mrowka stepping up for UMass 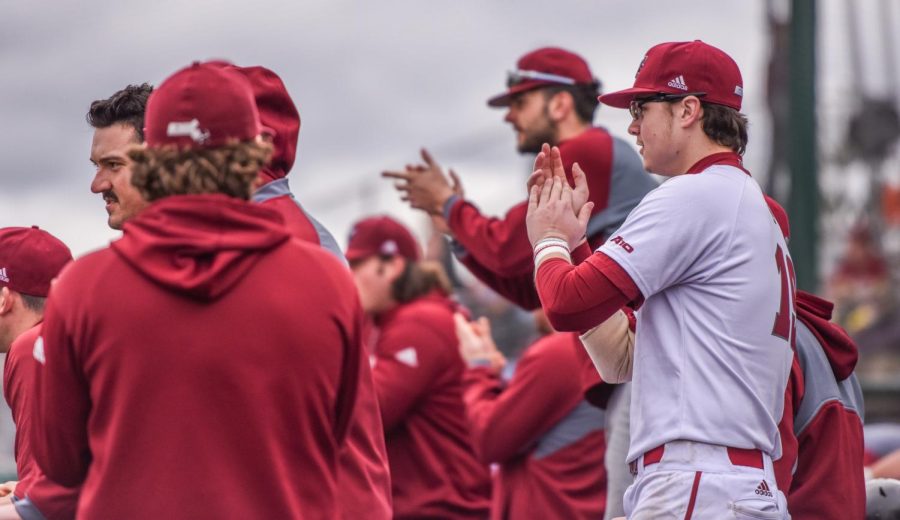 The top level of Boyden Gymnasium looks like a larger version of a high school gym. Unlike the crisp, clean, almost extravagant Champions Center down the street, home to the Massachusetts men’s and women’s basketball practice facilities, the floor in Boyden is scuffed, the lines faded. For the Massachusetts baseball team, this is home, at least until Earl Lorden Field thaws.

“If he strikes out or if he hits a home run, he’s always the same,” freshman Frank DiOrio said. “He’s got a smile on his face, getting the guys going.”

Expected to anchor the lineup for UMass in 2018, Mrowka has settled into the cleanup spot over the first third of the season. As UMass looks to reverse the fortunes of a struggling program, Mrowka is fast becoming a cornerstone for the Minutemen, on and off the field.

“If we’re going to be good, we need him to be good,” first-year coach Matt Reynolds said. “There’s no two ways about it.”

Early in 2018, Mrowka stayed in for the rest of the inning, ultimately coming around for the tying run, but was replaced in the fifth by DiOrio, normally a starting outfielder.

“First thing he did was try to teach me the plays in a matter of five seconds,” DiOrio said. “All the plays we had in five seconds. He didn’t care what happened, he was just going to teach me, make sure I got my job done as well so I’d know what I was doing in the field.”

On a UMass team with nine true freshmen and a new head coach, Mrowka has become one of the team’s leaders. He’s proud to mentor the younger players, many of whom have already seen action. In particular, he points to the mistakes he made transitioning to college baseball.

“One of the biggest things I was trying to tell Luke [Oliphant] and [DiOrio] was just to not spook yourself out,” Mrowka said. “Yeah, it’s college baseball, it’s different; but in the end, it’s a bat, it’s a ball, it’s a glove. You’re just playing baseball.”

Mrowka’s older teammates stressed the morale boost he delivers on a daily basis. He was described as someone who brings people together and knows how to make things fun. The phrase “energy guy” came up several times.

As DiOrio pointed out, Mrowka’s personality comes through at a glance.

“Did you see his mustache?” DiOrio asked. “He definitely likes to keep it light, keep it fun. And he brings energy.”

Between Mrowka, Reynolds and the incoming players, the newfound energy around the Minutemen is unmistakable. Five seasons removed from its last .500 finish, things are starting to look up for UMass baseball. Over spring break, UMass reeled off an impressive five-game winning streak, highlighted by three dramatic come-from-behind victories over Bucknell.

The coaches and players who were here last year concur that there’s a different sense around this team. For the first time, perhaps in years, they believe they can win on a regular basis.

From Mrowka’s perspective, the atmosphere is definitely different this year — a real sense of brotherhood.

“This team has something special,” Mrowka said. “It’s tough to say.”

While UMass has struggled the past two years, Mrowka himself has been steadily on the rise. After coming in as a shortstop, he was moved around the diamond before finally settling at first base.

Although Mrowka put together a decent freshman year, starting 31 games and hitting just below .250, college baseball came as a bit of a shock. Playing high school ball in Connecticut, the pitchers were just aiming for the plate and throwing as hard as they could. When he started at UMass, he faced killer curveballs and changeups that were painting the corners of the strike zone.

It wasn’t just the pitches that impressed Mrowka, though. More than anything, he was struck by how hard the pitchers were working, “practicing their passion,” as he put it. Heading into his sophomore year, he redoubled his efforts, trying to exercise patience at the plate and only swing when he could make contact.

The work paid off. Lost amid a rough 2017 season for UMass, Mrowka had a breakout campaign. His average jumped to .285 and his power took off, as he hit 12 doubles and six homers for a low-wattage Minutemen team.

“My body, my shape — I play first base, I’m not going to be a speed-type guy. No one needs to tell me that,” Mrowka said with a laugh.

Over the summer, Mrowka played in the Futures Collegiate Baseball League with the Bristol Blues, where he focused more on his plate discipline. He added weight over the offseason and worked with Reynolds, formerly the hitting coach at Navy, to refine his swing.

Although Mrowka remains one of the only power hitters for UMass, his focus with Reynolds has been cutting down on fly balls and pop-ups. Reynolds’ vision for the slap-hitting Minutemen revolves around line drives and hard ground balls, rather than swinging for the fences.

Hopefully, Mrowka’s improved swing will deliver those results. But his strength and power will still be assets for the Minutemen.

Mrowka hopes to make it into professional, affiliated baseball. Like nearly every Division I baseball player, it’s been his dream since he was a kid. With his college career moving into the late innings, a big year could be what he needs to propel him to the next level.

Still, Mrowka stressed that what he really cares about is this year, this team. The Minutemen are shooting for an Atlantic 10 tournament berth, and that’s the one goal Mrowka has for the year.

“If that means playing a lot on the field, or not, so be it,” Mrowka said. “I just want to be there and be the best person and player I can be for my teammates.”

“I always kid with him because I had power,” Bill Mrowka said. “I did have a lot of power, hitting home runs and stuff, and I’d say, ‘I hit more home runs than you did in high school.’ But he can do things that I couldn’t do, that’s for sure. He has more raw power, I just had more power at a younger age. But he’s got more raw power, he’s got a better skillset, he’s got a better arm. He’s a better player than I ever hoped to be.”

Over the summer, when Cooper was living at home and playing for nearby Bristol, he impressed his dad with his commitment to maintaining his strength and conditioning. And every day, they would still go out to the batting cage in the backyard and work on his swing.

That relentless focus on hitting will be important if Cooper Mrowka is to realize his dream and make it to the next level. Only 17 players from UMass have ever made it to the major leagues, but plenty more have made it into the minors. In the past 10 years, five players have been drafted from bad UMass teams.

For what it’s worth, his dad thinks he has a chance. From a scouting perspective, Cooper projects to have power and, at least at the college level, a plus-arm and above average fielding at first base, thanks to his experience at shortstop in high school. He has a high baseball IQ and the other necessary intangibles.

Perhaps most importantly, he has almost two seasons left to improve and to impress scouts.

“I think he’s got a good chance,” Bill Mrowka said. “It’s not going to be for a lack of trying and putting in the time, that’s for sure.”

As the Minutemen look for a quick rebuild to escape years of mediocrity, Cooper Mrowka will be keeping an eye on the prize. But right now, he just wants to enjoy the newfound optimism surrounding the program, the sense of brotherhood on this year’s team.

“[I’m] not going to take anything for granted,” Mrowka said. “[You] only get four years of college. So I spend every day I have like it’s the last. If I do end up getting to the next level, great. If not, I love the game that I play.”