‘Our mind, our bodies, our power’ 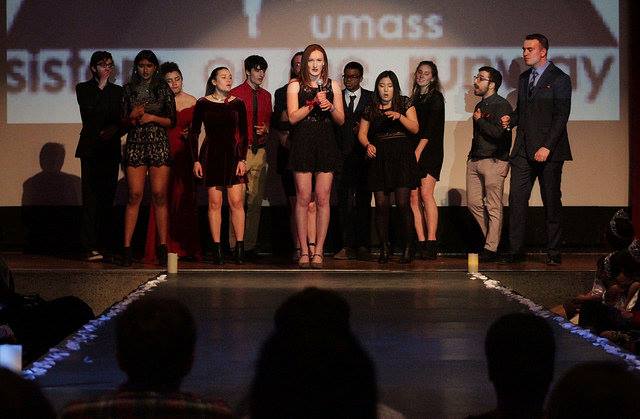 Unless you count that one time I stole my stepmom’s clothes and fell down the stairs while attempting to walk in heels when I was little, I’ve never been a part of a fashion show. Being passionate about fashion, I’ve always admired the big Fashion Weeks from my phone. I always fantasized about sitting next to Anna Wintour and casually gossiping about the outfits being walked on the runway. While there was no Wintour, I finally got my chance to see an actual fashion show on Saturday, April 7, when Sisters on the Runway held its 8th annual benefit fashion show. It was every bit as mind-blowing as promised.

However, the show was about way more than fashion. I expected the show to start with the models walking, but the University of Massachusetts’ Vocal Suspects took the stage first instead. They were followed by other acts, most notoriously the Not Ready for Bedtime Players’ skit depicting scenes and reciting myths and facts about early signs of abuse.

After, Victoria Disalvo, a campus ambassador of the One Love Foundation, spoke. “[Domestic abuse] is a public health epidemic and no one is talking about it,” Disalvo said, after stating the fact that three women in the United States will be killed by their partners every day.

This fact really caught me by surprise. Of course, I knew how prevalent domestic abuse is in every society, but knowing that by the time the show finished three women would have died was a discomforting feeling. I come from a country where the concept of domestic violence is virtually nonexistent. What would normally be called an abusive relationship here is called a husband’s right in Bolivia. The acceptability of one partner physically and psychologically abusing the other is so ingrained in Bolivian society that we’re currently the South American country with the highest index of gender-based — and thus, in most cases domestic — violence (in 2017, there were 109 registered cases of feminicide).

I have always wanted to do something about it, but never quite knew what. Over there, I lack the power to actually make a difference, especially taking into account that my opinion is often overlooked merely because I’m a young woman. One would think that by having such a high index of violence, stopping domestic violence would be a priority to the government. But aside from half-hearted campaigns featuring a hotline that doesn’t always work, the Bolivian president is more concerned with cementing his dictatorship than saving the lives of the citizens. Again, this is because of a deeply ingrained idea that domestic violence is something “that just happens.” It truly feels like an impossible situation.

I felt like I would have to admit defeat in the fight against domestic violence until Saturday. Following Disalvo’s moving speech, Amber Abdella, a representative for local domestic shelter Safe Passage, talked about the shelter and how important SOTR’s collaboration is (they have raised $10,000 over the course of eight years). Then came SOTR’s co-presidents, Chelsea White and Elizabeth Kane. I’d had the pleasure of interviewing both before the show, and I knew how much SOTR and the show meant to them, but it wasn’t until I saw them on that stage that I realized how invested they were.

After a brief intermission, music started playing and the models started walking down the runway. Sporting outfits in great part donated by businesses such as TJ Maxx and JC Penney, the models showed off every bit of beauty they had. It was truly inspiring to see women of all colors and sizes fiercely walk down that runway.

That’s when it hit me, and I saw the true power of fashion. I had seen before how fashion could be a great conduit to inspiring movements, like the historic 75th Golden Globes, where nearly every guest wore black in support of the #MeToo and Time’s Up movements, or with designer houses like Prabal Gurung and Dior who are not afraid to get political with their collections. But this was the very first time I’d seen fashion as more than just a conduit for a movement. That night, fashion was the movement itself.

By walking the runway, these women were not only showing off pretty outfits, they were telling the world that their bodies were beautiful, and that they belonged to them, so no one had the right to abuse them in any way. They were telling the audience that our bodies too belonged to us, and that it’s necessary to stop those who think otherwise. On Saturday, I felt prouder than ever to be so in love with fashion, prouder than ever to be a woman and, above all, I felt inspired to finally start making a change.

If you want to get involved with SOTR, follow them on Instagram @sotr_umass, on Facebook @Sisters on the Runway-UMass division or email them at [email protected]