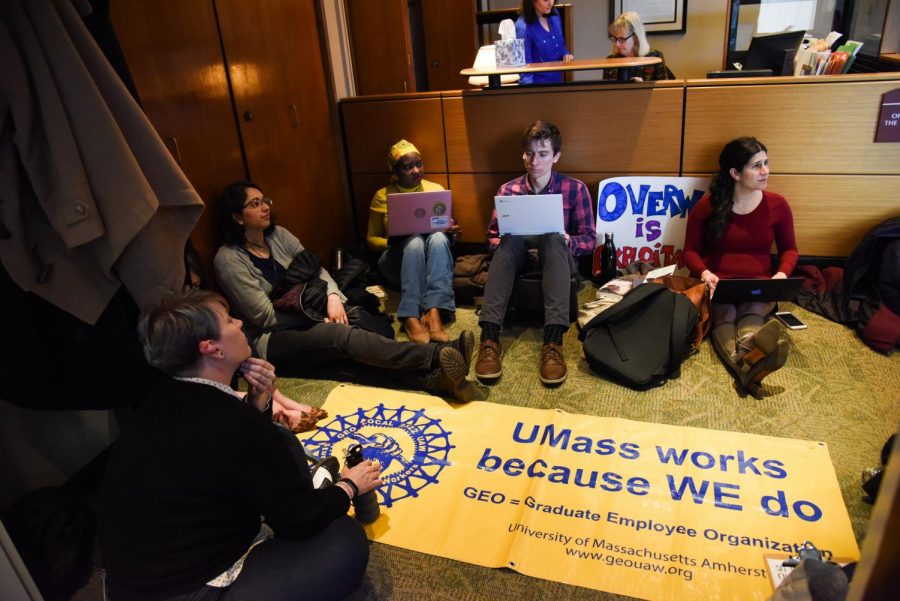 From 11 a.m. to 4 p.m., about 100 graduate students and GEO members flowed in-and-out of the Chancellor’s waiting room to volunteer time toward sitting-in.

“We have been trying to re-negotiate our contract that covers 2,200 graduate students since last April, and the University has been dragging its feet or rejecting our proposals for demands such as summer housing and wage increases. They are simply not interested in talking about it,” said GEO co-chair Santiago Vidales. 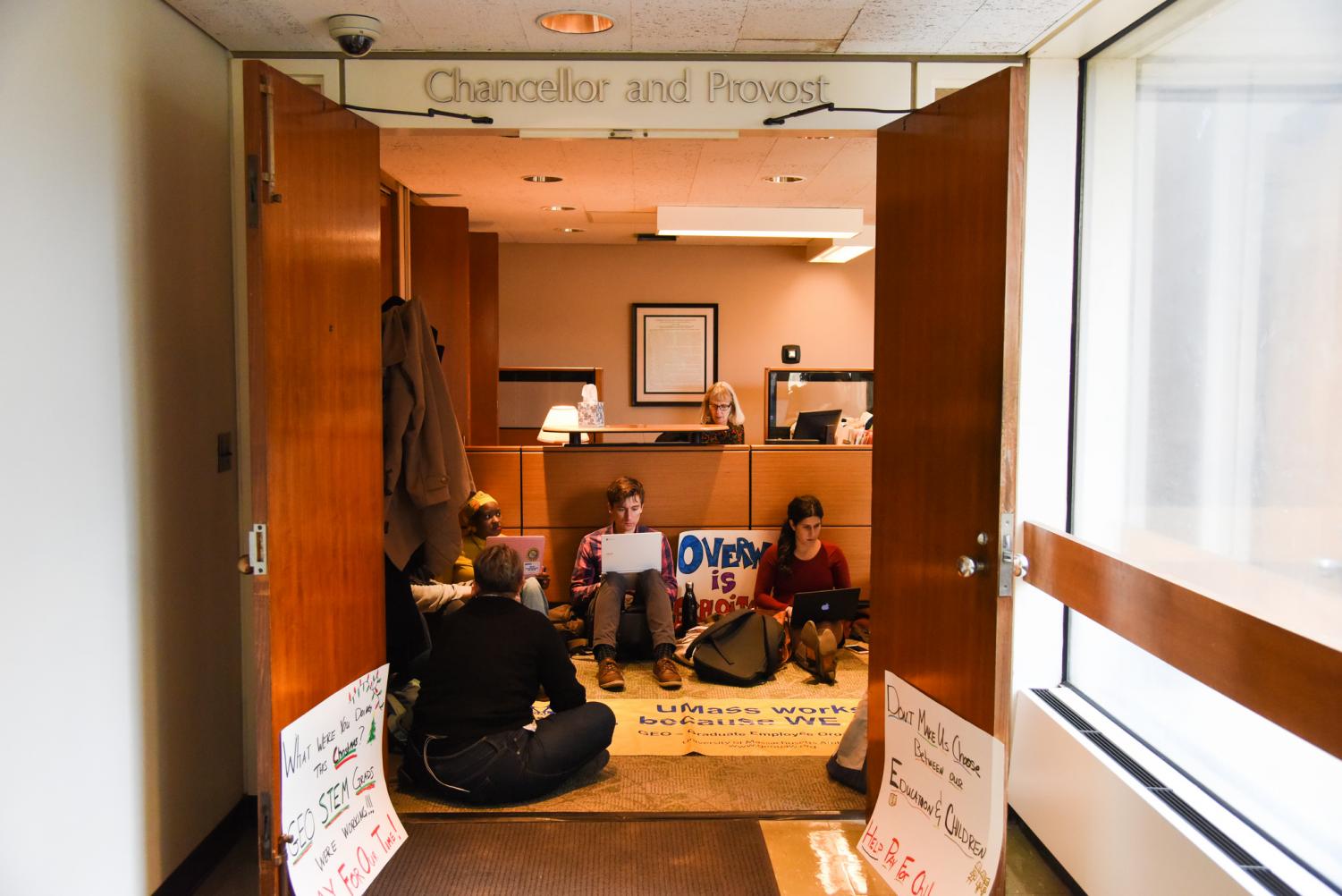 “It has been a difficult year with them. At bargaining tables, we receive verbally positive messages, but outside of that interaction, nothing happens; there is no written paperwork or contracts being made to meet the demands and increases we are asking for,” Vidales added. “We want to bargain for a new contract that better helps graduate students survive while also getting an education.”

During the sit-in, graduate students were completing school work on their laptops and holding handmade posters. Statements written on the posters included, “Don’t make us choose between our Education & our Children. Help pay for our children.,” “What are we doing this Christmas? We are working!,” “Overwork is exploitation” and “UMass works because WE do.”

The GEO is a unit of Auto Workers Local 2322 union that protects and represents graduate workers at the University. According to Vidales, the union began bargaining with the University the beginning of April 2017. The contract is re-negotiated for improvements every three years, and this month marks a year that the re-negotiation is overdue.

“We work with Bryan Harrington to bargain and negotiate our contracts. Generally, we get very friendly feedback and proposals from him, and then he later parades around Whitmore asking for advice [from other people] about our demands and receives negative responses, so then, nothing happens. We are not asking for extravagant benefits. We are just asking for basic tools, like livable wages, to survive and also work as students,” said GEO grievance counselor, Anna-Claire Simpson.

Simpson is Ph.D. student studying English literature. She works more than 40 hours a week teaching an English class for the University and working at GEO. She also maintains another job outside of the University scanning GRE exams for a non-profit educational testing and assessment organization called Educational Testing Service to support her family. Simpson has two kids, and one of which is in day-care. It costs $800 a month for day-care for one child, Simpson said.

“All I do is work all the time to survive. I work more than 40 hours a week. And we are asking relatively small costs from the University, a university that basically bought out another college [Mt. Ida College] and is putting millions into building a new Student Union,” Simpson said. “A lot of these things we are asking for would provide us with enough support that I wouldn’t have to have any grievances with the University, and we wouldn’t have to perform a sit-in.”

With only forty-five minutes before the end of the scheduled sit-in, at 3:15 p.m., Steve Goodwin, the deputy chancellor, came out of the Chancellor’s office to ask the graduate students sitting-in to “please quiet down while people are working.”

“I’m sorry, but that’s not going to happen,” Vidales said in response to Goodwin.

“Let’s be honest: It does matter how we’re treated, and if this is how you want to get across your message by asking to be treated better and then treating other people badly, then that’s fine,” Goodwin said, addressing graduate students sitting-in in the waiting room of the Chancellor’s office.

“We have been in negotiations for a long-time, a year, with the administration, and the administration has not been treating our representatives with any sort of respect. So this is not a one-off interaction; this has been a result of an interaction that has not been resolved for a whole year,” said Devika Dutt, a UMass Ph.D. student in economics and graduate student worker in response to Goodwin’s statement.

“I don’t know think we can talk about respect just from this interaction, because we are workers of the University, and the University has not been treating us with respect. That is precisely why we are here. Our work is not being respected; our contract is overdue for a year, and that has not been respected,” Dutt added.

Graduate student workers and GEO members continued to talk to Goodwin and express their concerns about lack of benefits from the University. Goodwin attempted to quiet the students sitting in, but students continued to speak and verbally engage with Goodwin.

The sit-in ended at approximately 4:30 p.m. and Goodwin took the placard that the GEO made that had information of the demands they sought in a new contract as well as signatures from GEO members that agreed with the placard’s proposal. 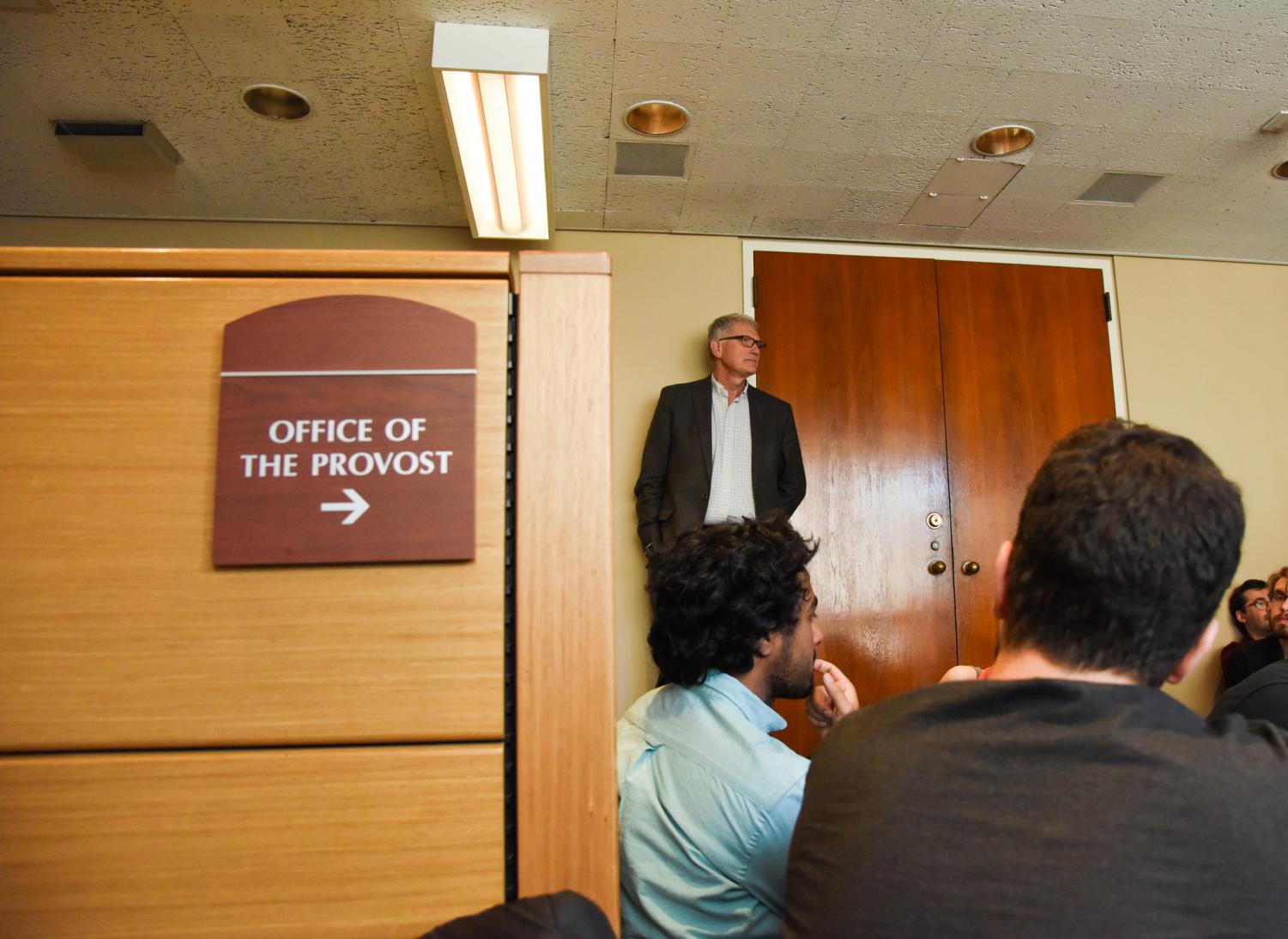 “We were here to sit-in, to put pressure and leverage on the University to sign a new contract that will have better benefits for [graduate] students. The University has been disrupting the lives of our members by avoiding to sign the contract, and now, we decided to disrupt them for five hours on a Friday. They didn’t like it, and it seems like they don’t know what a protest is. We want to express that we are pissed-off with them,” Vidales said after the sit-in was over.

Another bargaining meeting is going to be scheduled between the Chancellor’s office and GEO either next Thursday or Friday at 1 p.m.

Caroline O’Connor can be reached at [email protected]