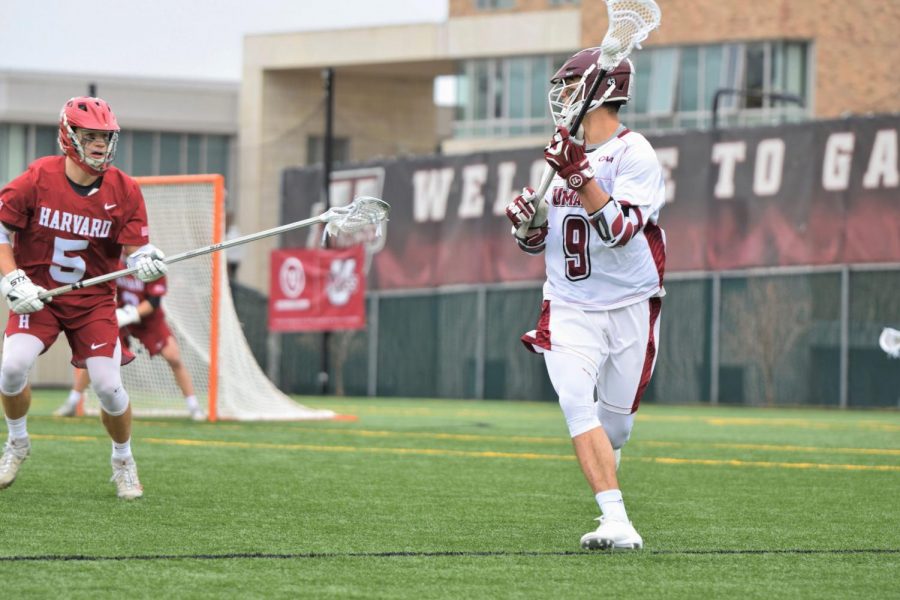 It was a historic day for the Massachusetts men’s lacrosse team in Philadelphia on Saturday.

The Minutemen (6-4, 1-0 Colonial Athletic Association) defeated Drexel 9-8 to earn their fifth straight win, while coach Greg Cannella picked up his 200th career victory in the process.

Cannella, who is in his 24th season as head coach, has spent his entire career at UMass and is the 10th active coach to reach the 200-win milestone.

The Dragons (4-5, 0-1 CAA) didn’t let the 200th win come easy. The Minutemen trailed 10-8 with just under nine minutes to play in the game, but were able to rally back with strong offensive play.

Senior Buddy Carr brought UMass within one with 8:47 remaining, and attackman Devin Spencer knotted the game up at 10 a minute later off a feed from sophomore Jeff Trainor.

With 4:33 to play, Ben Spencer was able to break the tie, barreling through a Drexel defender before rifling a shot into the back of the net.

The Minutemen defense would hold strong the rest of the way, and freshman goalie Hampton Brannon made a clutch save with three seconds on the clock to preserve the win.

Brannon, who has been the starting goalie in each game during the win streak, finished with six saves, as the UMass defense was able to keep the ball away from him, forcing 16 turnovers and grabbing 30 ground balls.

“Our defense was playing really hard in front of him and turning the ball over,” Cannella said. “We weren’t relying on him to make a ton of saves today. He made the big one when we needed him to.”

The Minutemen had a balanced scoring attack with nine players tallying goals, with Devin Spencer leading the way with a hat trick. Cannella was pleased to see his team continue to excel in the transition game.

“Finding the back of the net, making some clutch plays,” Cannella said. “Our transition game was going. Everybody did a good job finding people.”

UMass opened the game by scoring two goals in the first minute off the sticks of Trainor and defenseman Isaac Paparo. The teams would trade goals before Drexel would fire off three straight goals to close out the first half to give them a one goal lead heading into the break.

The Minutemen were able to outscore the Dragons 3-2 in the third quarter to tie it up before the final 15 minutes as Devin Spencer scored a pair of goals and senior Jake Lisauskas added one of his own.

The game was the first conference game for UMass, and coming away with a victory in a tightly contested game should give the Minutemen confidence as the season winds to a close.

“It’s ratcheted up because you’re on the road,” Cannella said. “You have a team that’s breathing down your neck almost the entire game and there were some situations where I thought Drexel was really going to jump out and get after us. Our guys hung in there defensively, we won some timely faceoffs and we were able to score in transition again.”