The duo combined for 12 points in their most recent game 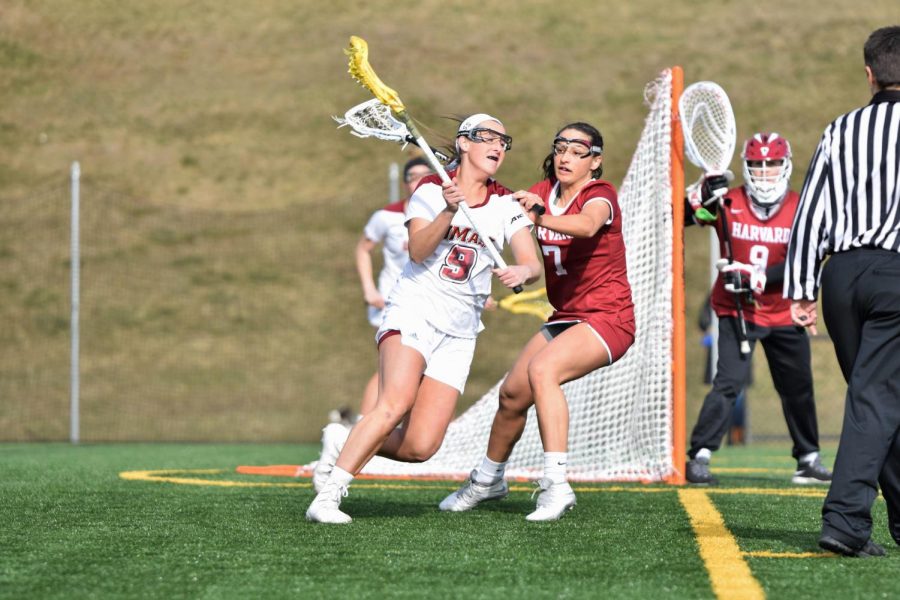 Heading to Fairfax, Virginia to take on George Mason, the Massachusetts women’s lacrosse team will depend on the continued exemplary play of leaders Holly Turner and Kiley Anderson to accel them to victory.

Turner, who tallied five assists last game against La Salle, has been fundamental to the UMass (9-3, 4-0 Atlantic 10) offense this season. Leading the team with 27 assists and 55 points, Turner will have her hands full on offense against a Patriot defense (9-3, 3-1 A-10) that ranks 12th in the nation in goals against average.

“She’s key,” said UMass coach Angela McMahon. “She’s a playmaker, she really gets her teammates involved. She sees things and she puts the ball exactly where it needs to be.”

Though her passing has opened up scoring opportunities for the Minutewomen, McMahon sees other important qualities in Turner that have elevated her play on the field.

“She’s always been a good feeder and a good attacker who has been capable of scoring goals,” McMahon said. “The two areas that she’s really blossomed in this season is her overall leadership across the board in every asset. Then what she’s doing on the ride in terms of causing turnovers and generating offense going the other way is just really instrumental to us right now, so, I think she’s having a great senior year. She’s a balanced attacker that can score in feed and she’s definitely very dynamic and a good teammate and a great leader, so I’m happy with how her senior year is going.”

Turner’s ability to move the ball, in addition to her leadership and ability on the ride, has allowed 17 different Minutewomen to score this season.

Although the George Mason defense ranks well in preventing goals from scoring, there’s no reason to believe Turner and the Minutewomen will try to do anything differently on offense on Friday.

“We’re just going to play our game,” said McMahon. “That’s what we’re good at and that’s what our team feeds of off. The one area I just want to clean up is that some of our shot selection the other day wasn’t great. We forced some opportunities that we didn’t need to. We just really need to push on the gas pedal in terms of momentum and going forwards but making sure we’re still being smart with our shots.”

Creating opportunities for good shots begins with gaining possession of the ball, a skill that Anderson has honed very well in the draw circle this season. The midfielder has racked up 72 draw controls this season, averaging six per game—good enough for her to rank 17th in the nation in draw controls per game.

Though Anderson has been the leader of the draw circle for the Minutewomen, McMahon has cycled through multiple players in that position to build experience and keep teams guessing.

Even if Anderson isn’t taking the draws for the Minutewomen, she has done a significant job scoring the ball as well. Tallying five goals in her last game, Anderson sits right behind Turner with 27 goals on the season.

Through the play of Turner and Anderson, the Minutewomen will look to tally their 59th consecutive Atlantic 10 victory in Virginia on Friday.