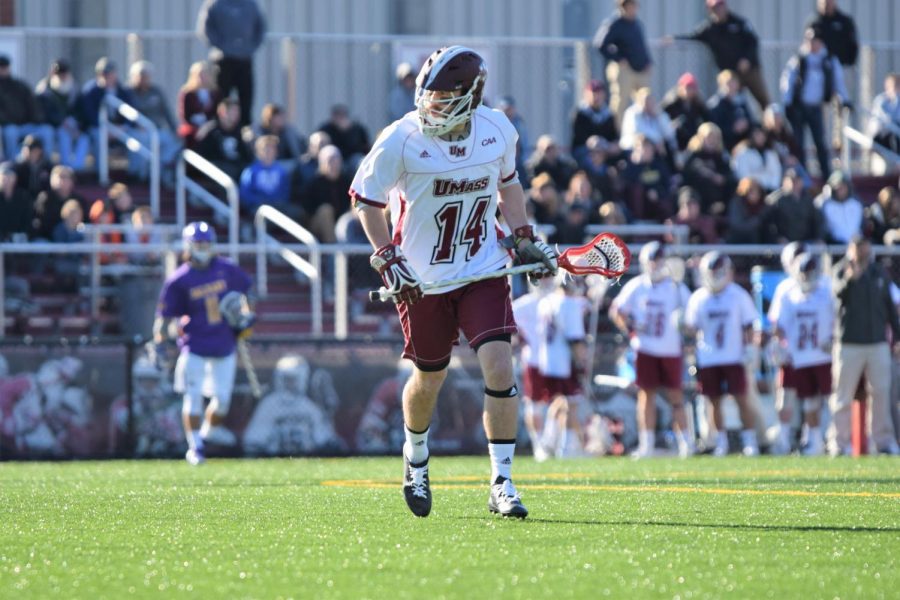 During its win streak, the Massachusetts men’s lacrosse team has found different ways to find wins. The Minutemen (8-4, 3-0 Colonial Athletic Association) have come out of the gate and blown teams out, controlled games start to finish and came back in the final quarter to earn victories.

Saturday against Towson, UMass knew finding a victory wouldn’t be easy. The Tigers (4-7, 1-2 CAA) had defeated the Minutemen twice last season, including a win in the CAA championship game. With the Tigers holding a 3-1 halftime lead, it looked like UMass would have an uphill climb to get back in the game. Towson’s defense was locked in, and goalie Shane Brennan wasn’t letting shots get past him, making eight saves before the halftime break.

Despite all of that, the Minuteman offense was able to come alive in the third quarter. UMass capitalized on a man-up opportunity with 12:24 left in the third with Jeff Trainor finding the back of the net, and Jake Lisauskas tied the game just three minutes later. With 4:48 left in the quarter, freshman Chris Connolly gave UMass the lead off a feed from Ben Spencer.

“Their goalie was outstanding in the first half,” UMass coach Greg Cannella said. “It just didn’t go our way. We had some pretty good opportunities and we snuck a couple by him. We felt we were there in the first half and we were a little snakebit.”

The UMass defense was able to feed off the energy the offense was giving them, keeping the Tigers off the scoreboard. Sean Sconone got the start in goal for the Minutemen and played his best game of the season, making eight saves, four of which coming in the third quarter.

Towson would score the opening goal of the fourth quarter to tie the game at four, but it would be the last time they would get a shot past Sconone. Lisauskas scored the go-ahead goal with 8:59, driving to the goal and firing a laser shot into the top right corner of the net. Trainor would then take the ball end-to-end with 3:07 left, sealing the win for UMass.

Trainor would add another empty net goal two minutes later, and Billy Philpott added another to give the Minutemen an 8-4 victory, making it seven wins in a row for UMass.

“We’ve talked about it since the beginning of the year, there’s going to be games where you’re up, there’s going to be games where you’re down,” Cannella said. “It doesn’t matter, you have to go and make the next play. Each and every game prepares you for something different, and the last two CAA games and how tight they were…you know we’re in a good spot we just have to go out and capitalize on our opportunities.”

Trainor, who scored the lone Minuteman goal in the first half, tied his season high with four goals, giving him a hat-trick in three of his last four games.

“My teammates put me in good positions to attack matchups,” Trainor said. “I try to be a leader as a sophomore and you have to step up for your teammates at times, and they trust me and I trust them.”

With the Tigers’ defense packing it in and their offense playing at a slow pace, UMass had to find different ways to gain possession offensively. It did so by winning the ground ball battle 23-16, with Noah Rak winning 12-of-16 faceoffs.

“[The defense] won us the game,” Trainor said. “They were unbelievable. Sean was great in net. They tell us ‘we’re locking it down for you, now you have to lock it down for us.’ They helped us propel to the win.”

The Minutemen will look to keep the win streak alive Saturday, traveling to Connecticut to take on Fairfield.