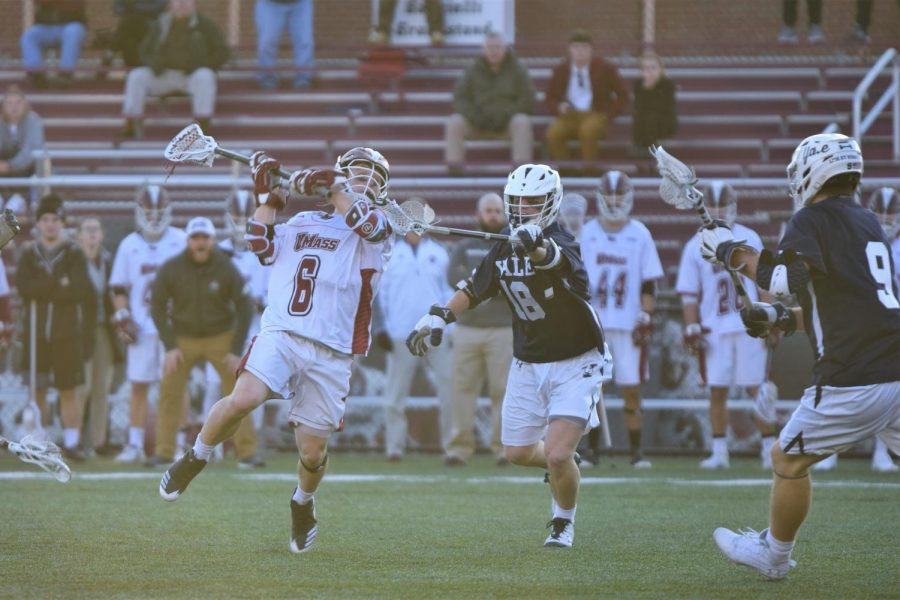 After the first month of the season, it looked like the Massachusetts men’s lacrosse team was still feeling the hangover from losing in the Colonial Athletic Association championship game the year before. The Minutemen opened the season by dropping four of their first five games and struggled against ranked teams in No. 16 Army, No. 11 Yale and No. 1 Albany. In each game, they got down early and couldn’t muster comebacks in the second half.

Even with the rocky start, UMass coach Greg Cannella kept his motto of looking at games one at a time, not getting too far ahead and just focusing on the next opponent. The next game after the Albany loss, the Minutemen put a beating on New Jersey Institute of Technology, a 17-3 victory, which jumpstarted a win streak that eclipsed eight on Saturday after a win against Fairfield.

Ranked No. 16 in the country, UMass (9-4, 4-0 CAA) has a chance Friday night to close out the regular season with an unblemished record in conference play, something the program has not accomplished since the 2012 season when the Minutemen finished with a 15-1 record.

Sometimes the best lessons are learned through losing, as Cannella says that the team hasn’t talked about last season’s loss to end the year and that their sole focus has been on this season, where it should be. Just as UMass put the championship loss in the rear-view mirror, the Minutemen forgot about the tumultuous beginning of the season to rebound in a strong way.

While UMass has already clinched the top spot in the CAA tournament, don’t expect it to take its foot off the gas against Hofstra Friday night. The Minutemen are looking to end the season on a high note, but won’t let the chance at a perfect conference record bring added pressure into the game.

“You’re going to have to play one of these teams again,” Cannella said. “All that is great. All that stuff is for the end of the season. You can’t sit back and go, ‘Wow, this is great because of what we just did.’ If you look or play or act about the past or the future and forget about present, you’re in trouble.”

The UMass win streak has largely been predicated on a high-powered offense that has delivered in the clutch. The Minutemen lead the CAA in just about every offensive category (goals, assists, points and shots) and have been led by a balanced group with multiple threats for defenses to account for.

What makes this UMass team a scary threat for any opponent is the improved defense. Cannella has reinserted junior Sean Sconone back into goal where he has shined, allowing just four goals in each of his past two starts and making a career-high 20 saves against the Stags on Saturday. While Sconone has made the saves, the defenders in front of him have been stellar as well, leading the conference in both ground balls and caused turnovers per game.

With the Minutemen stopping shots and turning the ball over, they have been able to play in transition, an area of the game they have excelled in. The consistency of both units has kept UMass out of the loss column. Cannella knows that teams are looking to end their run and feels that it keeps his team hungry as they want to enter the postseason with the streak intact.

“There’s been really good consistent teams that have lost games as well,” Cannella said. “The 2006 team lost games during the season. It’s something that I’m hoping these guys can hold on to and understand that this is a strong accomplishment, but they know that someone is trying to snap that, and that’s what you have to protect against.”

With the mix of a coach with postseason experience and a team that is playing its best lacrosse at the right time of year, the sky is the limit for the Minutemen.