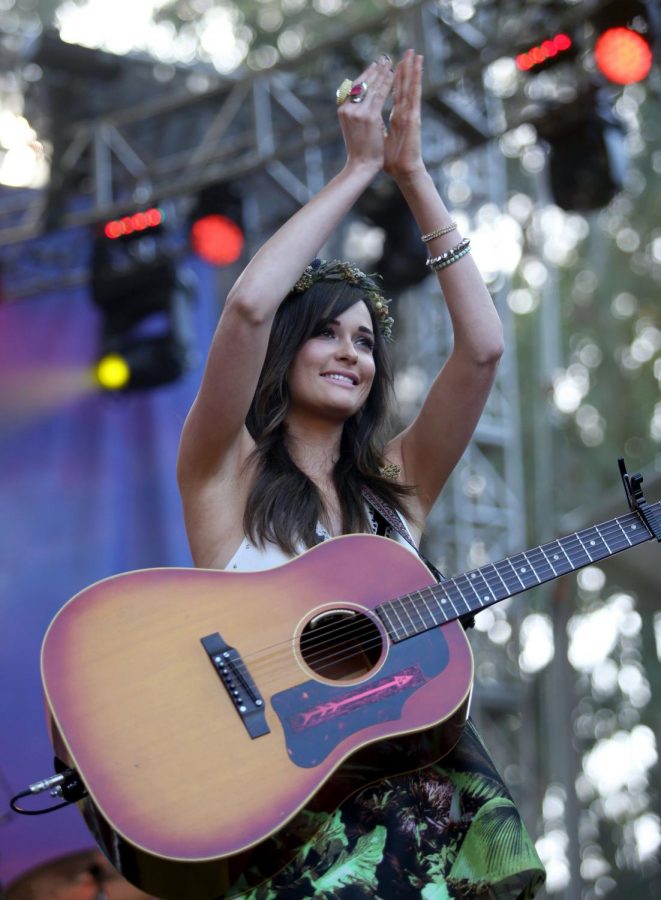 Most people wrinkle their nose at the mere thought of listening to country. Too many connoisseurs of media insist that they have a diverse music taste, that they listen to everything—except country. This isn’t to say that the genre is necessarily bad, but the preferences seen firsthand among college students whose music tastes tend to get more and more esoteric also tend to brand country music as something not worth listening to. Kacey Musgraves changes this entire perspective.

On “Golden Hour,” the Texan songstress tests the waters of crossing genres, dipping between stripped, acoustic ballads and dance-y, nearly-disco tracks. Musgraves’ superb songwriting ability tells you love stories from the heart, the kind of words that truly grant the singer the right to title her album “Golden Hour”—it’s an album worth rolling down your windows to, sunset going down on an interstate to nowhere in particular.

Some songs sound almost like folk, emulating the quaint, seemingly endless and intoxicating strings that you’d hear on a Sufjan Stevens record. Her vocals seem to drip like honey, sugar-coating each lyric with a certain calmness that makes you to listen to the album all the way through, maybe a few times over.

The album’s first single, “Space Cowboy,” is classic country with a twist, echoing with a magnetic twang of the guitar that draws you in completely. What’s so gorgeous about this song is how Musgraves makes you feel like you’re in a dream, and the entire last half of the song has the ability to emanate the feeling of weightlessness, with the wordplay of “You can have your space, cowboy” cleverly intertwined between melancholy lyrics. Even the vocals themselves are rather spacey, floating in and out as Musgraves’ voice serves as a blanket to put you to a fuzzy kind of sleepiness.

One of the album’s strongest tracks, “Velvet Elvis,” is playful and contagious in the singer’s declaration of love through catchy rhymes and an infectious backbeat. The song perfectly transitions into “Wonder Woman,” which asserts the honesty of being human in a relationship where Musgraves may be expected to be more.

The singer takes an unexpected turn with “High Horse,” the album’s third single. The track sounds like something that must’ve been produced by Tame Impala’s Kevin Parker, minus the hallucinogenic effects. It’s not the first instance on the album with strange psychedelic rock-esque moments—“Oh, What A World” starts with a distorted voice on vocoder before it transitions to Musgraves’ usual songbird vocals. “High Horse” is a surprise, and an incredibly catchy one at that. Its disco-pop kick drum and 70s-esque strings are juxtaposed with an attitude that calls out the arrogant man in the room as Musgraves tells him to “giddy up and ride straight out of this town.”

Musgraves wears spring on her sleeve, with a cohesive album that breaks boundaries while simultaneously acting as a soundtrack for all things warm and bright. The title track of the album epitomizes this, with silky vocals and folky guitar strums that would put Neil Young to shame.

The singer’s evolution from a cult-favorite country artist to a country artist that dips between genres, harboring fans of all different backgrounds and tastes, is impressive and shows off her complexity and ability to create a sonic scape that somehow appeals to everyone. “Golden Hour” holds the sentimental value of love letters and captured moments and car rides home—it’s the ebb and flow of growing up. Musgraves lays her heart out in her songwriting in a way that’s completely conspicuous. There’s no resisting her words because of how crystal clear they are. The cinematic elements of the album as well as its unorthodox (in terms of what you would think of when someone mentions country music) quality makes it musically impeccable, and definitely worth grabbing a hold of.

Ariya Sonethavy can be reached at [email protected]