Freshman is 14-3 this season 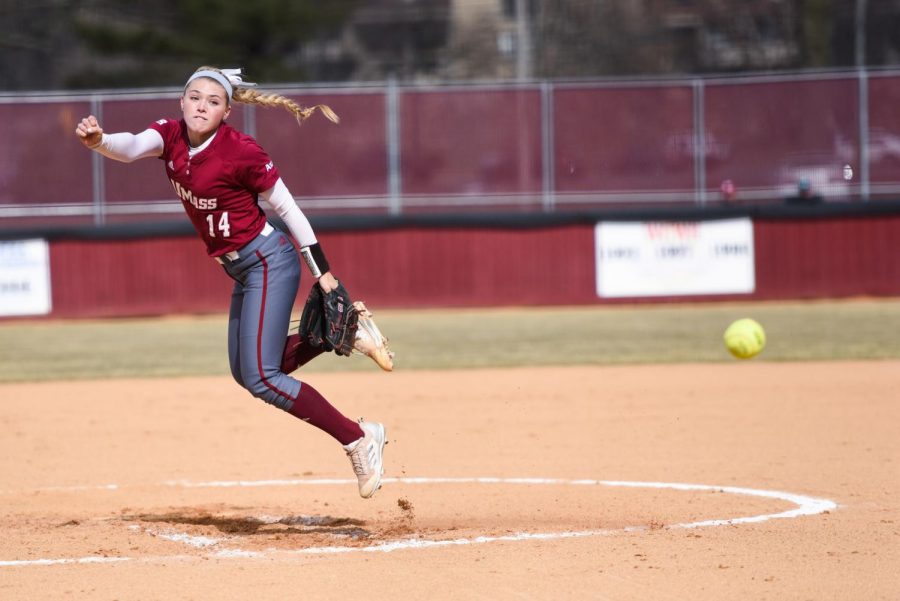 Kiara Oliver doesn’t seem to have time for an adjustment period.

With two-time All-Conference First Team pitcher Meg Colleran graduating at the end of the year, the Massachusetts softball team looks to have its next ace already penciled in, as Oliver continues to dominate at the collegiate level.

Oliver’s record sits at an impressive 14-3 this season, with a 2.02 earned run average and 129 strikeouts in 121.1 innings. She leads the conference in wins, total strikeouts and strikeouts on a per-inning basis, and on Monday was named Atlantic 10 Pitcher of the Week for the second time this season.

“She’s doing a great job,” said junior Kaitlyn Stavinoha. “She’s come in and she hasn’t missed a beat as a freshman. It’s awesome to see the confidence she has on the mound, and we feed really well off of it. I know I feel super confident with any of our pitchers on the mound, but [Oliver] has a certain competitive edge that gets you pumped to play behind her.”

Oliver went 2-0 against St. Bonaventure over the weekend, striking out 22 batters and allowing just two runs in 17.2 innings of work, posting a 0.79 ERA.

Earlier in the week, she came on for an extended relief appearance against Boston College, allowing just one run on three hits in 5.2 innings and punched out seven batters to limit the damage in a mid-week loss.

For her efforts in those three games, she earned her second weekly award of the year.

“She’s on a mission just like the rest of them,” said UMass coach Kristi Stefanoni. “She wants so, so, so badly to win for her teammates and you can tell that she’s doing whatever it takes. You can tell when she wants the ball and she wants to take care of it herself, by strikeout or whatever. You can tell by her demeanor on the mound, how she walks and how she approaches the game. I’ve been proud of her. A lot more left, but she’s done a great job so far.”

The Minutewomen (26-12, 14-0 A-10) will host Rhode Island for a doubleheader on Tuesday, and Oliver will likely get the ball to start one of the two games.

The Rams (11-28, 3-10 A-10) have struggled this season, with the conference’s weakest offense by runs scored. Stefanoni calls URI a “scrappy” team, but it doesn’t boast an offense that should expect to trouble Oliver who has had few issues adjusting to collegiate hitters.

“I definitely think I’ve adjusted well, but I also think there’s a lot more I could do better, so I’m excited to see how it goes and how we finish it out. I feel really good; I’m ready to go and to keep going.”

Tuesday’s doubleheader is set for a 1 p.m. start at Sortino Field.