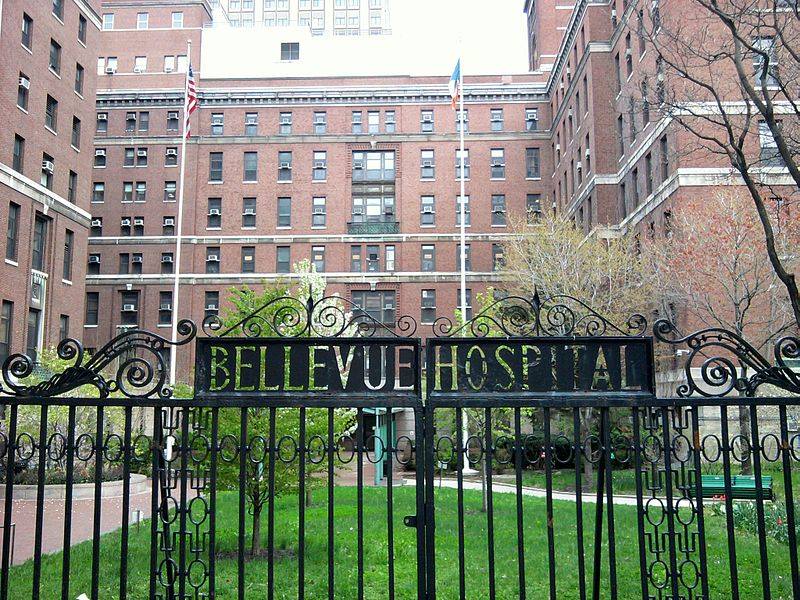 David Oshinsky, director of the Division of Medical Humanities at NYU Langone Health, delivered the 2018 Kathryn and Paul Williamson Lecture entitled “Bellevue: Three Centuries of Medicine and Mayhem at America’s Most Storied Hospital” on April 24 to approximately 50 students, staff and faculty in the Commonwealth Honors College Events Hall.

Established in 2000 by Kathryn and Paul Williamson, the 2018 Williamson Lecture’s co-sponsors included the CHC, School of Public Health and Health Sciences, Department of History, College of Humanities and Fine Arts, College of Nursing and Institute for Applied Life Sciences.

“He has tackled some of the most important issues of the 20th century, and won a host of prestigious awards including the Pulitzer Prize in History, the Cartwright Prize, the Hoover Presidential Book Award [and] the Robert F. Kennedy Book Award.”

Oshinsky’s talk began by discussing the hospital’s presence in popular culture, notably as the destination of Kris Kringle in “Miracle on 34th Street,” the filming location of numerous scenes in “The Godfather” as well as consistent references in “Law and Order” and “Blue Bloods.”

Since Bellevue doesn’t turn anyone away, it’s the ultimate safety net in New York City serving everyone. According to Oshinsky, it attracted and continues to attract the greatest physicians in the country.

Bellevue’s been involved in numerous historical incidents or at the forefront of technological advancement, according to Oshinsky.

On April 15, 1865, Dr. Charles A. Leale treated Abraham Lincoln immediately after the shooting in Ford Theatre. At the time, Bellevue had a medical school, from which Leale had recently graduated. Ulysses S. Grant’s throat cancer was diagnosed at Bellevue.

James A. Garfield’s physician following the assassination attempt came from Bellevue. According to Oshinsky, the two wounds Garfield suffered wouldn’t result in death today, but the surgeon from Bellevue didn’t treat Garfield with antiseptic medicine. It took about two months before Garfield died due to infection.

Grover Cleveland probably survived due to Garfield’s death. According to Oshinsky, Cleveland’s cancerous mass was removed from his mouth successfully in an entirely antiseptic operating room; Cleveland lived for another couple decades.

“To my mind, the association between insanity and Bellevue Hospital began with this extraordinarily gutsy and sensational [Nellie Bly],” he said.

Oshinsky described the hospital’s “low point” as the murder of Kathryn Hinnant, a 33-year-old pathologist. According to the New York Times article, “Doctor Is Beaten to Death in Her Bellevue Office,” the New York Police Department assigned 50 detectives to the investigation. According to Oshinsky, a homeless man living in a maintenance closet in the hospital killed Hinnant, who was pregnant at the time. After this, the hospital increased its security.

Just a few years ago, Hurricane Sandy struck New York City. “This was the biggest hurricane in the history of the Atlantic Ocean, and it hit…right in New York Harbor…There was the biggest storm surge anyone had ever seen, and the storm surge went right over the retaining wall at Bellevue…completely [flooding] out the first two floors of the hospital,” he said.

Oshinsky described the tremendous evacuation, the largest vertical evacuation of a hospital in the nation’s history, following Hurricane Sandy, in which every patient, except two who couldn’t be moved, were evacuated safely.

Amanda Siegel, an undecided, pre-medical freshman, decided to attend because the topic piqued her interest. Since Siegel’s from Westchester, just outside New York City, she jumped at the chance to hear about Bellevue, which she didn’t know anything about. After attending the talk, Siegel’s interested in potentially working at Bellevue someday.

“I’ll say finally, if I were hit by a car in New York City, Bellevue’s the place I want to go because they have the best level one trauma unit in the city, maybe the country,” Oshinsky said.