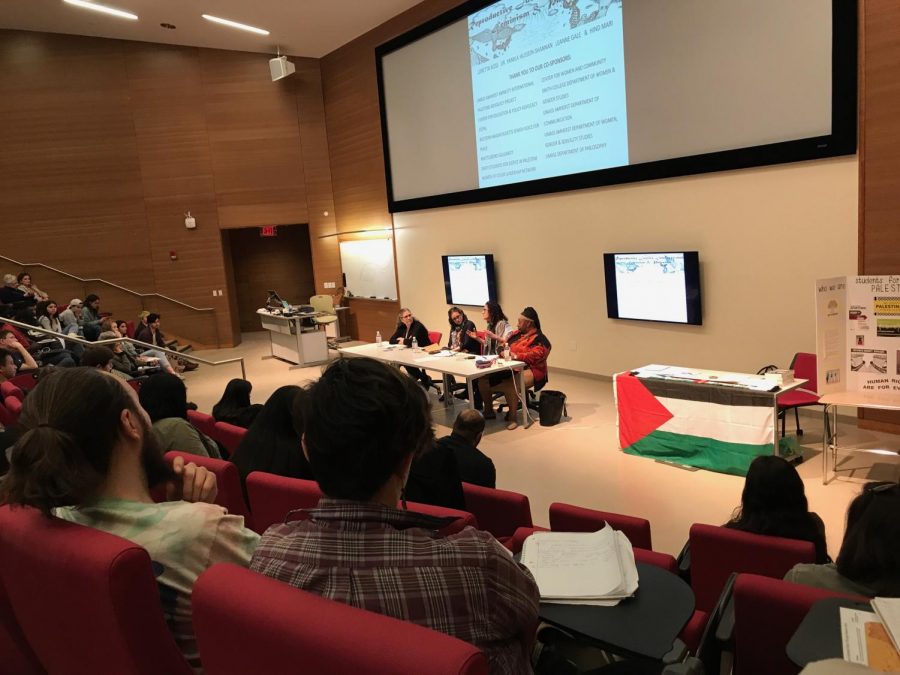 Maternal mortality, accountability and the place of the trans movement in Palestinian liberation were topics of interest at a panel hosted by Students for Justice in Palestine on Tuesday, April 24.

Titled “Reproductive Justice, Intersectional Feminism & Palestine,” the panel discussed the ways in which reproductive justice impacts the roles and position of women in Palestine. The panel also connected the experiences and issues faced by Palestinian women to the ways other oppressed, colonized women deal with the misogyny imposed upon them by imperialism and reinforced by their own communities.

Speaking on the panel were Hind Mari, Leanne Gale, Yamila Hussein-Shannon and Loretta Ross, who each offered a unique perspective on the issues discussed.

Mari, a Palestinian refugee whose field of expertise revolves around women’s empowerment and advocacy work, started off her portion of the panel by painting an image for the audience of the current state of reproductive health in Palestine. She referenced situations where Palestinian women are forced to give birth at the 98 fixed checkpoints in the West Bank, 62 permanently-staffed checkpoints within Gaza—not to mention the 18 just located within Hebron—while en route to the hospital. Mari said that this “causes the death of mothers and babies.”

The intention of her reference was to show what little control Palestinian women have over their own bodies.

According to Mari, “in many [Palestinian] communities, contraceptives are frowned upon,” and childbirth is seen as a way to “raise more soldiers for the resistance.” Additionally, many arranged marriages in the communities involve underaged girls. Other cultural gender and sexuality stigmas include that “lesbians are not allowed to start…families of their own,” people with physical and or mental disabilities are thought of as incapable of having sexual relationships and “everyone is assumed to be cis-gendered,” according to Mari.

Mari then drew comparisons between the struggles of Palestinian women and those of Black women in the United States.

“It doesn’t matter what their education level or class is,” Mari said. “What matters is their exposure to systematic racism.

“However, women have always resisted the occupation [of Palestine],” she added.

One of the major achievements of the Palestinian women’s resistance movement was the drafting and publishing of the “The Women’s Rights Document,” which outlines “principles for gender equality and women’s social and economic rights,” according to Nahed Fraitekh Odeh, a principle policy officer at Office of Environment and Heritage. Other accomplishments include providing healthcare to Palestinians and organizing a co-op that, according to Mari, “planted the seeds of the [Boycott, Divestment, Sactions] movement.”

The next panelist to speak, Gale, was a Jewish anti-occupation activist and Yale Law student who worked at Ir Amim, an Israeli non-profit that advocates for the rights of Palestinians in East Jerusalem. While with Ir Amim, she “worked extensively with Palestinian feminist and women’s organizations in Jerusalem,” an experience that she credits with helping her unlearn much of what she had been taught about Israel throughout her childhood.

Gale talked on her journey to identifying as a Jewish anti-occupation activist: Growing up in a religious household with a strong “Zionist upbringing,” it was when Gale attended college that she began a “process of disillusionment and betrayal.” Because of her college experiences, Gale decided to intern for Ir Amim, where her goal was to “amplify the rights of Palestinian women.” However, Gale made sure to point out that her work at Ir Amim does not allow her to “speak for the experiences of Palestinian women.”

“I can only speak for my own,” Gale said.

Gale also discussed the ways in which Israel uses reproductive rights to rationalize their treatment of Palestinians. One method that she talked about in detail was the common trope about Palestine being a patriarchal society that mistreats women. According to Gale, the spread of this trope diverts responsibility to Palestinians and “erases Israel’s role in the oppression of the Palestinians.”

Gale added that demographic policies are another weapon used by the Israeli government on Palestinians. According to her, Israeli government officials are explicit about their goal of maintaining a Jewish demographic majority within the state. In Jerusalem in particular, Israeli officials have articulated the explicit demographic goal of a “70 percent Jewish majority and 30 percent Palestinian minority.” Gale also noted one report that said that 25 percent of Palestinian women in East Jerusalem have been exposed to tear gas while pregnant.

“Every Palestinian woman who gives birth in East Jerusalem knows that the state doesn’t want that baby to be born,” Gale said. “That is reproductive oppression.”

However, Gale said that Jewish women are also negatively affected by this fear of losing a demographic Jewish majority.

“We are weaponized as a demographic vessel in a war,” Gale said.

The third panelist, Hussein-Shannan was born in East Jerusalem but pointed out that for the past nine years, she has not been able to enter the country.

“You know more about Jerusalem than me,” Hussein-Shannan told Gale. “I’m not allowed to go in it.”

A Palestinian feminist scholar, Hussein-Shannan’s work focuses on the examination of “matrices of oppression and liberation, particularly institutionalized and structural supremacy, anti-Black racism and settler-colonialism.” To Hussein-Shannan, the fight for reproductive rights is the fight for decolonization, because “if you don’t know about women, then I don’t know what it’s [oppression and liberation] about.”

Hussein-Shannan noted three forms of oppression Palestinian women live under: colonization, patriarchy and men who live with a squashed patriarchy caused by Israel. According to her, when Palestinian men are publicly humiliated—including being “forced to parade naked in the streets,” by Israeli soldiers and citizens—they end up forming “a very distorted view of how they want to be seen within their own communities.”

Another tactic of humiliation is one that is not targeted solely to men. Hussein-Shannan recalled a time that she saw two Israeli Defense Force soldiers patrolling East Jerusalem, both wearing T-shirts. One of the shirts depicted an image of what was supposed to be a Palestinian baby in the crosshairs of a rifle with the caption “the smaller, the more difficult.” The other shirt had an image of a pregnant Palestinian woman with the caption “two-for-one.”

Hussein-Shannan claimed that Palestinian patriarchy is not to blame for the oppression of Palestinian women.

It is “because of the occupation that we don’t have spaces,” Hussein-Shannan added.

She also stated her personal struggles with bringing up feminism in the oppression of Palestinians.

“When they are murdering my people with snipers, I don’t know how to talk about myself as a woman,” Hussein-Shannan said. “It’s very hard to do.”

“When a Palestinian girl said, ‘I don’t want to be a feminist,’ I understand,” Hussein-Shannan said. “The feminism we have in Palestine is white and middle class.”

Along with her focus on acts of oppression, Hussein-Shannan discussed actions being made toward liberation. For example, Hussein-Shannan stated that 17 Palestinian organizations had formed a coalition (Muntada in the West Bank, Al-Amal in Gaza) to push the Palestinian authorities to pass a law that protects women from domestic violence.

“We have made a lot of progress,” Hussein-Shannan said about Palestinian women.

Ross, the final panelist to speak and a visiting professor at Hampshire College, is an activist for reproductive justice widely celebrated for her work with the D.C. Rape Crisis Center, National Organization for Women and the Black Women’s Health Imperative. Ross also co-founded SisterSong, a collective of organizations that “organize women of color in the reproductive justice movement,” according to her bio on Hampshire College’s website.

As a Black woman, Ross felt that she could understand the plight of Palestinian women through “a Black feminist lens,” especially feeling as if “everyone wants our solidarity until they don’t need it anymore.” Ross also referenced her work as an activist in “anti-Klan” and “anti-fascist” groups in U.S. in the 1990s.

“Because of this experience, I consider myself an expert on racism, as well as anti-Semitism,” Ross said.

Whether discussing the oppression of Black Americans or Palestinians, Ross claimed that it is necessary to understand “how the system of advantages and disadvantages is created.” In regard to reproductive rights, Ross said that this means understanding “whose bodies are privileged and why and whose bodies are oppressed and why.” To Ross, the system behind this “why” is white supremacy.

Similar to Hussein-Shannan’s statement regarding the squashed patriarchy and misogyny in Palestine, Ross claimed that Black men engage in misogynistic behavior, such as “having control over women’s wombs and childbirth,” as way of “making up for a failed patriarchy.”

However, Ross made sure to note that “white supremacists are demographically doomed,” which is why minority women, in this case Palestinian women, and their bodies are so heavily controlled. Some tactics of population control include “whitening-up” and, similar to what Gale stated earlier in the evening, “limiting non-white populations.”

One of Ross’ solutions to dismantling oppression is to stop “denunciation.” To Ross, in order to organize a successful movement, one must “treat others as human beings.” She even said that her own purpose “is the art of making lives matter.”

“I don’t even hate the Klan,” Ross added.

Another part of Ross’ method to eliminating denunciation is confronting bigotry within one’s own communities. Although “historically, any Black activist who spoke up for Palestine got punished,” Ross stressed how important it is to “get control of Black anti-Semites.”

“Our Black struggle doesn’t give us the privilege to be stupid about this type of stuff,” Ross said.

After an audience member asked about the role of trans rights and people in the movement, Ross and Hussein-Shannan were wary. Both women felt that, although they believe in LGBTQIA+ equality and rights, bringing it up in a discussion about the oppression of non-white people distracts from, as Ross put it, “the central issue of settler colonialism, neoliberalism and white supremacy.”

Ross said, “You can’t achieve any justice without holding accountability to colonialism.”

Nuha Futa, a sophomore economics and mathematics major, asked about how, as activists, these women stay energized enough to keep educating others.

To Hussein-Shannan and Ross, organizing is sustainable if you make it a priority to keep having fun—as Ross put it, “having different circles for different needs, different friends for different events.”

“We found out how to make the revolution part of our daily lives—and part of it was having lots of fun,” Hussein-Shannan said.

Editor’s note: Since its original publishing, two passages of this article have been removed due to inaccuracies; the inaccurate passages include “… families have felt that, at the Israeli government health clinics, Israeli doctors are more likely to recommend abortion to Palestinian women,” and “According to Gale, when requesting to have an abortion, Jewish women are first shown ‘photos of dead children in concentration camps’ before confirming their decision.” Additionally, the description of Leanne Gale as an “anti-Zionist activist” was corrected to describe her more accurately as an “anti-occupation activist.” A passage regarding how Gale’s work at Ir Amim helped her unlearn her sense of Jewish identity was also corrected to reflect how her work helped her to, instead, unlearn much of what she had been taught about Israel throughout her childhood. Another passage that stated that Israel had a demographic goal of maintaining a “70 percent Jewish majority and 30 percent Palestinian minority,” was corrected to state that Jerusalem had this demographic goal. Previously, a passage stated, “through her experiences listening and interacting with East Jerusalem Palestinians, Gale noted that ’25 percent of [Palestinian] women [have] been exposed to tear gas.'” This has been corrected to state, “Gale also noted one report that said that 25 percent of Palestinian women in East Jerusalem have been exposed to tear gas while pregnant.”

Rebecca Duke Wiesenberg can be reached at [email protected] and followed on Twitter @busybusybeckybe.