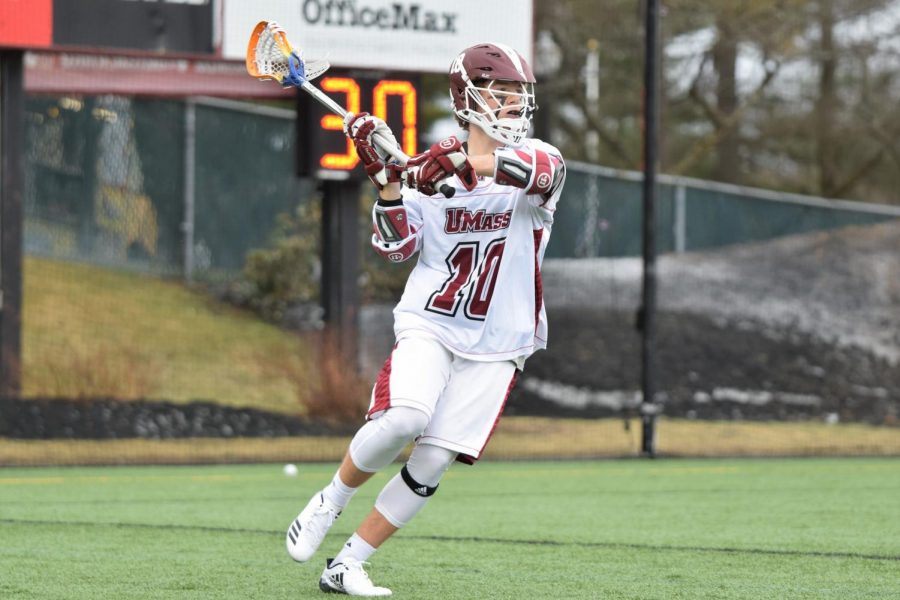 It’s safe to say UMass coach Greg Cannella has been pleased with his team’s performance in league play thus far.

The Massachusetts men’s lacrosse team took a four-game win streak into Colonial Athletic Association play and have built on it, taking victories in its first three games in the conference. But it hasn’t been easy.

The Minutemen (8-4, 3-0 CAA) needed fourth quarter rallies to come away with wins against Drexel and Delaware, and Saturday’s 8-4 triumph over Towson came down to the wire before UMass scored two open-net goals.

The stellar play has been noticed around the country, as the Minutemen enter Saturday’s game against Fairfield in first place in the CAA and ranked No. 18 in the country. Even with the recognition, Cannella won’t let it get to his team’s head, saying he hasn’t even looked at it and that his focus lies solely on defeating a tough Stags team.

“All those [CAA] games have been decided very late in the game so as a group you have to understand that,” Cannella said. “We as a group also live in reality and know that all these games are going to be dogfights and one-goal games and we expect the same this weekend.”

UMass has kept the streak alive through balanced play. The offense, which averages a CAA-best 11.42 goals per game, has multiple players capable of finding the back of the net. Leading scorer Buddy Carr didn’t have a goal Saturday against the Tigers, but sophomore Jeff Trainor came up large with four goals of his own. Other times this year it has been freshman Chris Connolly, who’s been named CAA Rookie of the Week three times this season, being the leader offensively.

On the defensive side, it hasn’t been easy for teams to score goals against the Minutemen. The UMass defense, led by junior Isaac Paparo, sophomore Jackson Suboch and senior Luc Valenza, leads the CAA in caused turnovers per game, forcing opponents to give up the ball an average of 8.33 times a contest. In conference play, they have surrendered a mere 7.3 goals allowed per game.

The Minutemen have been able to dominate possession of the game thanks to Noah Rak in the faceoff circle. Rak has been virtually unbeatable there all season long and has been on a hot streak the last two games, winning 28-of-34 faceoffs.

The combination of all three units playing well has keyed the UMass win streak, and is something Cannella hopes can continue moving forward.

“With every team that you have, you hope guys can build off each other and have confidence in each other,” Cannella said. “That’s why you play a team sport. You rely on other people- it’s not just you out there, it’s not cross country or wrestling.

“You have to rely on those guys and I think each group knows that if you challenge each other during the week in practice it’s going to help the other group and vice versa,” he continued. “Hopefully we can continue to push each other every day.”

Fairfield will look to exploit the Minutemen defense by forcing them to play a man-down. The Stags have been the best team in the CAA at capitalizing on man-up situations, converting 19-36 attempts. In CAA play, where every goal matters, Fairfield will look to grab a few easy ones while UMass is at a disadvantage.

“Every game it is [important to stay out of the penalty box],” Cannella said. “We’re going to foul. They’re above 50 percent and on the other side of that they don’t foul a ton. Certainly have to be in control.”

Faceoff is set for 1 p.m. in Connecticut.