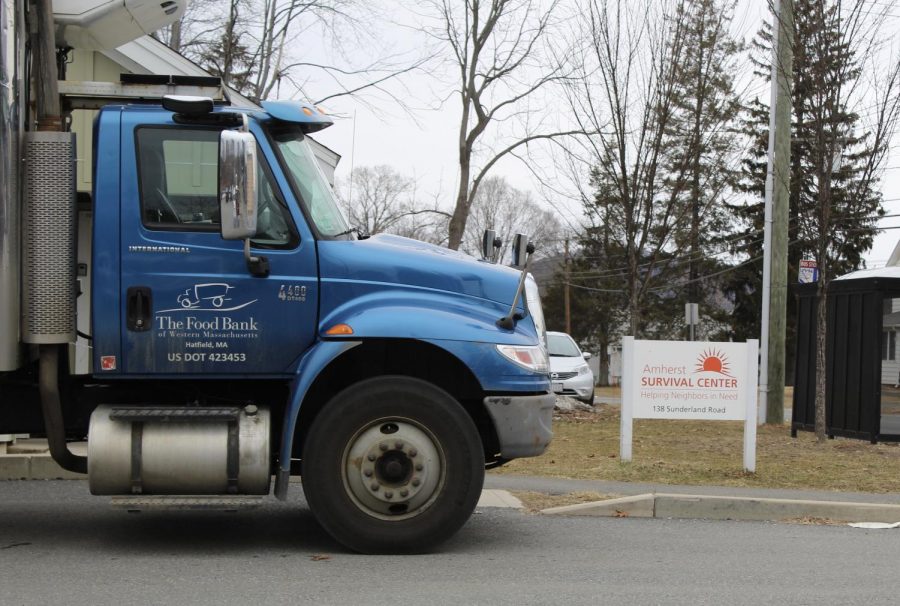 Over 100 students and community members gathered in the Integrative Learning Center on Thursday night to learn about food insecurity on the University of Massachusetts campus and current initiatives in place to address the issue.

The event, which was supported by the Campus Climate Improvement Grant and the CCSNE AmeriCorps VISTA Project with the Dean of Students Office, included opportunities for students to network with organizations addressing food insecurity and hear from a panel of initiative leaders.

Tassandra Rios-Scelso, the UMass food insecurity coordinator and campus contact for Southern New England AmeriCorps VISTA in the Dean of Students Office, introduced the event by emphasizing that 20 to 30 percent of UMass undergraduate and graduate students were identified as struggling with food insecurity.

“Holding events like this are important to increase awareness and learn how we can better support students who are facing food insecurity,” Rios-Scelso said. “I hope you will all have increased awareness of food insecurity and how to get involved.”

Amherst Survival Center executive director Mindy Domb sat on the panel of leaders addressing food insecurity in the local community. Domb called attention to existing programs offered by the ASC that offer food, clothing and health care to those in need. She also emphasized the importance of volunteers and invited interested students to join the efforts to address food insecurity.

“We can’t do what we do without volunteers,” Domb said. “It doesn’t close the hunger gap entirely, but it acknowledges the problem.”

Several panelists agreed with Domb on the importance of acknowledging food insecurity, saying the stigma surrounding the issue often leads to students not seeking help.

Murphy added that while “a lot of students are uncomfortable with that initial conversation,” it was important to reach out and offer the services.

Rios-Scelso and the other panelists discussed the opportunities available to students in need of help including local food banks, the ASC, short-term loans and emergency meal swipes from the Dean of Students Office and opportunities to enroll in the Supplemental Nutrition Assistance Program.

Irene Gao, a freshman nutrition and sustainable food and farming double major, explained that she attended the event due to her involvement with the MassPIRG Hunger and Homelessness campaign and she hoped to know more about the services involved in addressing food insecurity.

“We’re campaigning for SNAP benefits to be merged with MassHealth,” Gao said. “A million and a half people qualify for the benefits but only half receive them.”

In addition to discussing the realities of food insecurity and the initiatives to combat them, the panelists emphasized the importance of making the information more widely available.

Molly Hansen, a first year graduate student in the higher education administration program and a Learning Communities Graduate Assistant in the office of Residential Life, discussed her involvement with addressing the lack of information spread to students concerning the issue.

“It’s incredibly important to remember that food insecurity can be incredibly isolating,” said Hansen, describing her involvement with creating a presentation for Residential Life student staff members on how they can assist community members at risk.

“We may have number one food, but a lot of students can’t even enter our dining commons,” Hansen added.

Stephanie Higgins, a senior double majoring in social thought and political economy and public health sciences also served on the panel. As a community organizer of the Student Labor Action Project, Higgins said that food insecurity was an issue she felt very invested in.

“How can UMass Dining accept the title of ‘number one dining’ when they can’t even feed all the students?” Higgins asked. “UMass students are already taking initiative but they need more resources.”

Lily Wallace, a senior political science and civic engagement student, asked the panel about how to address campus food insecurity when the idea of the ‘hungry college student’ that lives on “ramen” is normalized.

Higgins responded by saying that it’s important to treat the issue with respect and not see the services as a form of charity, but instead to be “really honest and upfront” about services offered.

Domb commented that “one of the key things is to universalize the information,” and that forums offered the opportunity to educate more students on available resources.

Wallace explained that she attended the event due to her involvement as a volunteer at the ASC and other groups addressing food insecurity on campus.

“I think that it’s a really firm belief that I hold that everybody has a right to good nutritious food, and that’s not a reality,” Wallace said, “and it’s important to acknowledge that.”