Many warnings given in motor vehicle stops this weekend 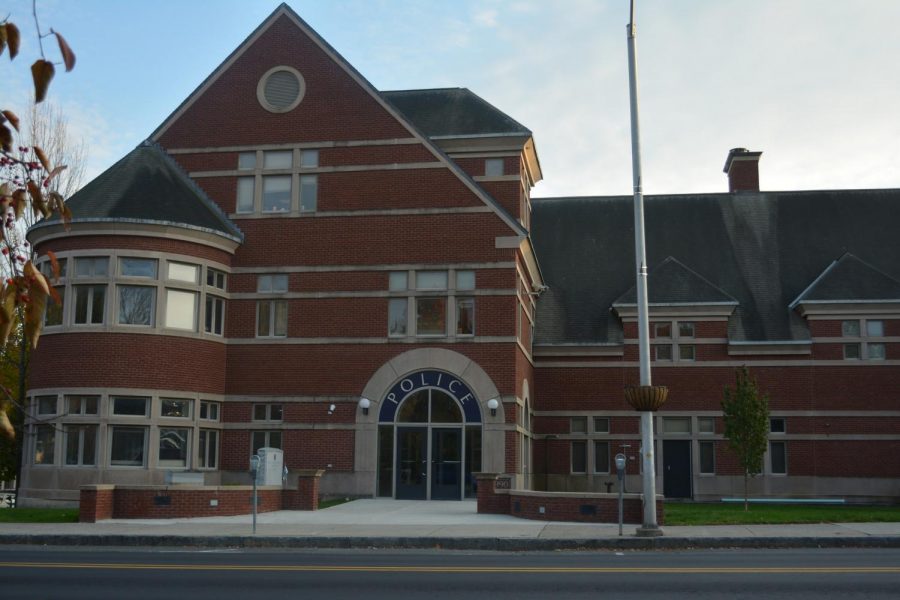 10:32 a.m.: Reporting party advised of an infant left alone in a vehicle, who looked to be about three months of age. The baby was not out of the involved party’s site. He did not want to wake the baby while making a call, so he stepped into the Big Y at 175 University Dr. and watched the car/baby while in front of the glass windows there. He went into the store so he could hear and because of the cold weather.

3:03 p.m.: Reporting party called stating that someone stole his clothes, and the owner of the laundromat has footage at Shine Laundry, 33 Montague Rd.

4:12 p.m.: A black 2010 Honda Civic, Vehicle 1, was traveling Northwest on Triangle St. As they passed the on-street parking area of 259 Triangle St., the operator of a red 2012 Toyota Corolla, Vehicle 2, attempted to merge into the Northwest travel lane. V1 crashed into V2. V1 sustained damage to its front right side. V2 sustained damage to its front left side and bumper. The estimated cost to repair the damage both vehicles sustained was greater than $1,000. As a result of the crash, V2’s bumper was detached and was observed to be lying next to the rear bumper of a parked black 2015 Hyundai Elantra, Vehicle 3. The registered operator of V3 was in the vehicle during the time the crash occurred and stated that the bumper caused a small scuff in the paint of his rear bumper. The registered operator of V3 had already wiped the dust off the entire rear bumper. Police could not determine if the damage was a result of the crash or prior incident since the bumper was moved prior to police arrival. The information exchange form and crash report process was explained. All of the involved stated that they were not injured. The vehicles were off of the roadway, and the operators arranged for tows via AAA.

5:32 p.m.: Reporting party stated that a man wearing a multicolored shirt and white pants was walking around the complex up to peoples’ doors stating he was from Eversource. Reporting party stated he does not think he was telling the truth. Listed party was soliciting for a company named Residence in the vicinity of Apt. 283, Puffton Village, 1040 North Pleasant St. He was advised of the town bylaw, which he understood. Listed party spoke to his partner, and they were advised they needed a permit in order to continue soliciting. Listed party was cooperative and went his way.

8:41 p.m.: Reporting party stated homeless people were smoking at the ATM at People’s United Bank, 25 East Pleasant St. Police checked the interior of the ATM. Individuals were gone on arrival.

11:37 p.m.: Reporting party stated the house next to hers at 800 North Pleasant St. was having a large party, screaming, yelling and walking over to her yard and urinating on it. Police found loud music and a large party. Approximately 200 plus guests left the party cooperatively. A warning was issued.

12:34 a.m.: A reporting party at Monkey Bar, 63 North Pleasant St. called the police about a person being unruly and possibly trespassing at the location. A bouncer at the location said the person was not allowed entry. He was later seen in the bar as he broke in through the back. The person was verbally removed from the location.

12:35 a.m.: An intoxicated male was having an argument with his roommates about going home at Antonio’s Pizza, 31 North Pleasant St. His roommates were able to convince him to go home for the night.

4:54 p.m.: A reporting party reported that a male operator driving a gray 2015 Toyota Corolla got angry with him for an unknown reason and drove the vehicle at him like he was going to hit him. The vehicle drove away after some words were exchanged. The reporting party informed the officer that the argument was verbal and not threatening in nature. He said he had no idea who the person was and just wished that the officer would advise the person to stay away from him. The police attempted to make contact with the operator of the vehicle at his residence, but he was not home. He later contacted dispatch and police spoke with him.

12:50 a.m.: A reporting party called in loud individuals at 19 McClellan St. It was a small gathering of about 30 people. The residents were cooperative in getting guests to leave and quieting down. A warning was issued by the police.

8:24 p.m.: The police arrived at Apt. A, 366 Northampton Rd. to singing, dancing and loud music. The town bylaw was explained to the listed party and guests and a warning was issued to the listed resident. The gathering was no more than 20 people.

1:06 a.m.: The driver of a 2013 Ford truck was stopped for a violation on Triangle St. The vehicle was slow to stop and while speaking to the driver, the police had reasonable suspicion and an exterior K9 sniff of the vehicle for narcotics ensued. The dog did alert to the driver’s side door and opened window. He was deployed into the vehicle and alerted to two areas. The vehicle was searched, and evidence of prior drug use was located. The operator did admit to prior drug use in the vehicle. Field sobriety tests were conducted and showed that the operator was not impaired at the time of the vehicle stop.

9:06 a.m.: A gray 2004 Toyota Camry was stopped at People’s United Bank, 25 East Pleasant St. The vehicle did not yield to oncoming traffic at the rotary located on East Pleasant St. The operator of the vehicle was advised of his infraction. The operator stated that he was not paying attention and will yield to cars next time. A warning was issued.

9:33 p.m.: A red 2017 Ford Explorer was stopped at 41 Northampton Rd. and field sobriety tests were performed. The operator was arrested and charged with OUI Liquor, operating to endanger and negligent lights violation. The vehicle came to a stop when first pulled over, but then proceeded to pull ahead and a second stop was performed.

10:37 p.m.: A gray 2011 Lincoln MKZ was stopped, and the operator was issued a warning for failing to follow lane instructions at 31 North Pleasant St.

2:38 a.m.: A green Toyota Avalon was parked in the driveway of an abandoned building at 1381 South East St. No one was in the area at the time that police arrived, and the car was secured and unoccupied.

7:08 p.m.: A reporting party called in a black pickup truck parked at 53 Concord Way for a while. She didn’t know if anyone was in the vehicle but thought it was suspicious. The police checked the area and there were no vehicles matching the description.

1:43 p.m.: A person reported that there is an issue with the railroad tracks and that spikes are missing near 276 Strong St. The woman said she is a transportation expert and is fearful of the derailment. She called her concern in to the railroad company and then left the scene.

5:16 p.m.: A man reported that he was targeted over social media with a check cashing scheme. He was requested to cash four checks for $1,200 each, and then purchase $1,000 worth of iTunes gift cards and \ keep the remaining money. He cashed two of the checks and then Santander Bank froze the other two checks. The bank requested that the police report be filed.

12:36 a.m.: The doorman at the Spoke, 35 East Pleasant St., reported to an officer that two people inside of the bar were fighting. The police officer identified the two people and advised them that they could seek complaints if they wished, to which they both declined.

1:21 a.m.: Reporting party stated that a white male wearing a red and blue plaid shirt was causing a disturbance at Antonio’s Pizza, 31 North Pleasant St. The police couldn’t find anyone matching that description in the area.

1:14 p.m.: A disturbance between a tenant and a landlord at 265 Strong St. led to the tenant gathering his belongings and leaving the property.

12:52 a.m.: A custody arrest was made at 72 Montague Rd. for breaking and entering at night, resisting arrest and assault and battery of an officer. A resident heard someone in the attic of the home and saw the arm of a person coming out of the attic. The resident waited outside until the police came. The police sent a K9 in. The male arrested attempted to hide in the house. Alcohol may have been a factor and the person was not known to residents.

2:11 a.m.: A green 2000 Pontiac SE Grand was seen parked at the Crocker Farm’s school parking lot and was unoccupied. Police conducted a check of the area and deemed the area okay.

10:18 a.m.: Reporting party states a stop sign was left on the side of 157 Columbia Dr. A message was left for the DPW to come and pick it up on Monday.

3:32 p.m.: A customer at Cumberland Farms on Montague Rd. was upset that a male party, dressed in a black leather jacket, was urinating outside the convenience store.

5:57 p.m.: A reporting party at Colonial Village Apartments on 81 Belchertown Rd. states a woman was sitting on his door crying and knocking trying to get his attention. The reporting party was unsure what she wanted from him. The officer spoke with the woman, who said she made dinner for the reporting party, but that they were uninterested. The officer escorted her back to her residence.

6:37 p.m.: An involved party ended up at the wrong house looking for his Amherst College professor. The officer showed up to 83 Woodside Ave. to sort out the misunderstanding and the language barrier that caused the original confusion.

10:12 a.m.: Reporting party states that a man fell asleep in the People’s Bank ATM, 56 Amity St. The listed party was removed without any issues.

1 a.m.: Reporting party reported a motor vehicle accident on Sellen St. There was minor damage to both vehicles and info between both parties was exchanged.

3:17 p.m.: An erratic motor vehicle operator was reported on Bay Rd. in Belchertown heading toward Amherst. The reporting party said the operator of a black 2007 Saab was weaving into the wrong lane. The vehicle was gone upon police arrival.

9:08 p.m.: A black 2012 Honda CR-V was reported as driving erratically on South East St. near South Amherst Town Common. Information was relayed to Belchertown Police Department after a second call saying the vehicle was approaching the Belchertown line.

11 p.m.: Reporting party reported that two silver sedans and one silver minivan were driving erratically and flashing their high beams near 557 Belchertown Rd. late Sunday night. The police search of the area turned up negative, with all three vehicles gone upon police arrival.

6:30 p.m.: A verbal argument in the parking lot of Big Y on University Dr. between two male parties led to one arrest. There was no physical argument. One male party was arrested on warrant initiated by another agency.

7:16 p.m.: Reporting party said a car drove through her fence behind her home at 97 Lincoln Ave. The officer spoke with the owner of the vehicle, who said he lost control of his car in the mud. A follow up with the reporting party was advised to determine if he would be charged with leaving the scene after causing property damage.