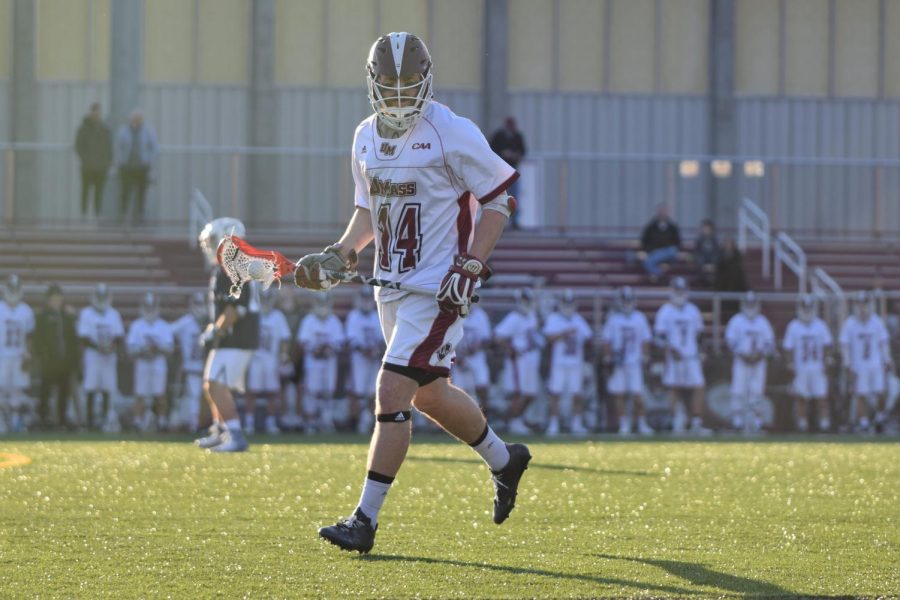 It wasn’t the start to the season Sean Sconone wanted, but the goalkeeper has turned it around and is playing his best lacrosse of late.

Sconone opened the season as the UMass starter in goal, but struggled through the first four games and was replaced by freshman Hampton Brannon. After Brannon allowed four goals to open the game against Delaware, UMass coach Greg Cannella went back to Sconone, who made 12 saves to preserve the Minutemen’s victory.

The job went back to the junior, and Sconone has made the most of his newfound opportunity, allowing just four goals against Towson and following this up on Saturday with the best performance of his UMass career: 20 saves that led the Minutemen to an 11-4 victory over Fairfield to make it eight wins in a row.

“My defense played great,” Sconone said. “They gave me opportunities to make stops and when the ball was on the ground, they got it up and that’s what we needed to do.”

After falling behind 3-1 with 8:46 left in the second quarter, UMass (9-4, 4-0 Colonial Athletic Association) began to assert itself and took over the game, scoring the next 10 goals. Senior Buddy Carr scored the first to start the Minutemen rally, and sophomore Devin Spencer was able to tie the game before the halftime break, finding the back of the net with one second left off a feed from Chris Connolly.

“The timing of it makes it seem more important,” Cannella said. “We tie it up and they fouled us on it, so we were able to possess the ball in the second half and score on it. That put us up. Every goal is important.”

The Spencer goal gave UMass momentum going into the half and they ran with it, scoring four goals in the first four minutes of the second half, with Carr scoring twice and Billy Philpott and Jake Marino also finding the back of the net.

UMass then closed the third quarter out with another goal off the stick of Jeff Trainor, giving the Minutemen a five-goal lead heading into the final quarter of play.

While the UMass offense had it going in the second, the defense played lights out from start to finish. Sconone made eight saves in the first quarter to prevent the Stag lead from building and made nine saves in the second half to keep Fairfield from getting back into the game.

“He was solid today,” Cannella said of Sconone. “Defensively, we were solid. They’re a very talented team. We talked about it this week those guys feel comfortable with Sean in there. He caught the ball a lot which is great and that starts transition. Happy with his performance and he needs to continue to be consistent.”

With Sconone making saves, the Minutemen were able to get the ball out quick and transition and beat Fairfield down the field, not allowing them to set up their zone defense. With the lead, UMass was able to pull the Stags out of the zone and score three more goals, these off the sticks of Clayton Proctor, Carr and Ben Spencer. Connolly had assists on the final two goals to give him five in the game, while Carr finished with four goals.

“The zone thing, when you’re not scoring like the first half, you’re going to put pressure on everybody,” Cannella said. “When we scored in transition that alleviated some of that stress. Guys were relaxed and playing.”

The Minutemen are back on the field Friday night, taking on Hofstra at Garber Field in hopes of staying undefeated in CAA play.