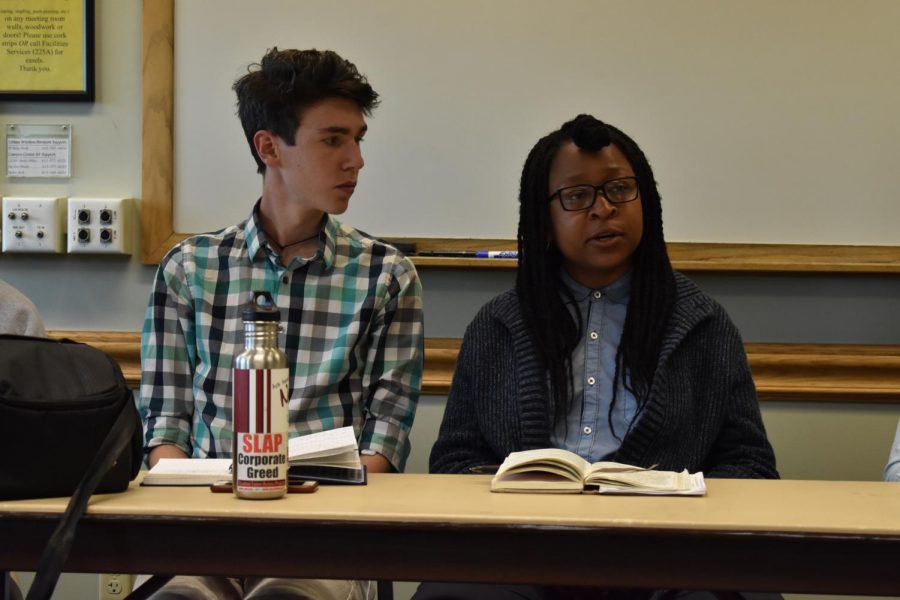 The University of Massachusetts Student Government Association held a town hall Thursday evening, during which, they discussed projects and goals for the upcoming year and answered user-submitted questions.

Only three people were in attendance at the meeting, but several questions were submitted and read from Twitter.

The first question came from a Twitter user who asked, “What areas do you think SGA has been lacking?”

Ishola kicked off the discussion talking about the need for the SGA to improve outreach and their presence in various communities. Amazan answered by explaining how advocacy had been lacking, adding that the current governance will advocate on the behalf of students.

“We do have shared governance with the University, so that means we have a direct stake and direct action to changing and introducing new campus policy,” Amazan said. “Student support is a big part of our mission, but I think what has been lacking is the governance part.”

Binnall stated that he wishes to work on supporting student groups not only financially, but holistically.

“My main passion for the SGA is to support student groups, because I think it is the best way to help everyone else carry out their missions, and that’s something that’s really cool for me,” he said.

Another question from Twitter read, “Is the SGA at all involved with the fact that meal plans prices are going up?”

Donoghue explained the SGA administration’s involvement in food insecurity initiatives and discussed what effects increases would have on students.

She said the SGA makes “sure administrators are aware of the student experiences and providing pushback, but also providing context about for what this will mean for students in regard to increases.”

“If meal plans increase by $200, it may mean students may not be able to afford to come to school. There are repercussions and consequences for students,” Donoghue said.

Differences between the Vitale/Wallace administration and the Sullivan/Amazan administration were brought up, and each cabinet member briefly discussed their goals for the upcoming year. A range of topics, including carbon pricing, diversity and inclusivity, restorative justice and affordable higher education, were discussed.

When asked about affordability and tuition prices for out-of-state and international students, Sullivan said he doesn’t know the best way to address it, since it is more difficult to address than in-state tuition prices at a public university. He believes changing the framework of how students are discussed will lead to more productive conversations on the topic.

“I think what is essential in starting to…change the way University administrators look at students. Specifically, a lot of the rhetoric is students as revenue streams, which I am not really supportive of,” Sullivan said. “It looks at us, not as students, but customers of our education.”